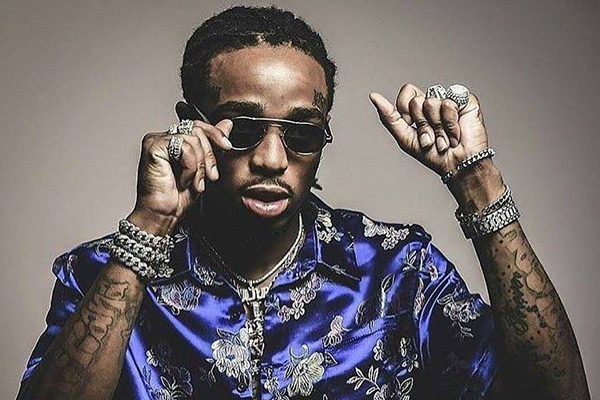 Quavo is a singer, rapper, songwriter and record producer is probably the most popular member of his band Migos. Quavo hit the stardom when his band dropped their single Versace which became a milestone for his career. Let’s take a closer look at the life of Quavo, his past, family, band career, girlfriends and net worth.

Quavo (actual name: Quavious Keyate Marshall) was born on April 2, 1991, in Athens, Georgia, United States. His father died when he was just four and his mother was a hairdresser. He grew up in Gwinnett County with the other two members of his band Migos.

Quavo went to Bekmar High School. During his time in High School, Quavo showed interest in Football. His school, Bekmar went 1-9 in the 2009 season, and Marshall went 19-of-25 for 201 yards and three touchdowns for the first win of the season. Quavo previously held the record by completing 28 passes in a game back in 2009. However, Quavo dropped out of Bekamar before graduation.

After Quavo dropped out his education, he formed a band with Takeoff and Offset, with whom he is directly related. Quavo is Takeoff’s uncle and Offset is Quavo’s cousin. Quavo, Takeoff and Offset we raised by Quavo’s mother. The group first named their band as Polo club, naming after the Polo t-shirt clothing line but later decided to drop the name as they felt that it is old and out of fashion. So the trio decided upon Migos.

The group released their first full-length project, a mixtape titled Juug Season, on August 25, 2011. They followed with the mixtape No Label on June 1, 2012.

On October 28, 2016, Migos released the first single, titled Bad and Boujee, from their upcoming second studio album. The single went on to top the Billboard Hot 100, becoming Migos’ first number one single in the US. Their second album, Culture, was released on January 27, 2017. In April 2017, Migos were featured on Katy Perry‘s song Bon Appetit.

On December 21, 2017, Quavo announced that he would release Huncho Jack, Jack Huncho with Travis Scott on December 22, 2017, without any prior promotion.

This American rapper, singer, and songwriter have quite a history of dating. Quavo was dating Lira Galore and Karrueche Tran back in 2016. But neither of the rumors got official. Then in 2017, Quavo was linked with Iggy Azalea but this too didn’t got any official.

Quavo’s current relationship with 38-year-old grandmother is catching a lot of attention. And, do not get any creepy imagination with the word grandmother. This grandmother is Bernice Burgos, a totally hot model. Bernice ex, T.I. dumped her and went to his wife and mother of his kids. And now Bernice has found her solace in this Migos band member.

And now it is also been in the rumor that Bernice is pregnant with Quavo’s child. However, there is no any official confirmation from the couple, Bernice has stopped drinking and has been asking people not to smoke around her. Well, it is clear, isn’t it?

Quavo Net worth, House, and Cars

Quavo has a very successful music career with Migos.

As of today’s date, the total worth of Migos is $12 million, which divides $4 million for each member.

So Quavo has a current net worth of $4 million. He has earned his wealth with all the mixtapes, singles, albums, he released in past with his band. Atlanta rappers Quavo, Offset and Takeoff broke through with viral hit “Bad and Boujee,” which topped Billboard’s Hot 100 singles chart en route to half a billion spins on YouTube; the trio now grosses north of $150,000 per tour stop.

According to The Blast, Quavo has been busy over the last year, purchasing several properties in Georgia for himself, as well as his family members. Back in August 2017, Migos Touring, Inc. bought a massive mansion in Alpharetta, Georgia. The listed price of the home was $2,098,000 but supposedly Quavo managed to finesse the plug to lower the price to $1,885,000. The house comes with all the extra features too, including six bedrooms, 6.5 bathrooms, a wine cellar, a fitness and game room, a pool, and much more.

That wasn’t the only house that Quavo bought. Jennie Lou Maddox LLC, the company that Quavo used to buy his momma a half-a-million dollar home last Christmas, has recently purchased a third home in Lawrenceville, Georgia. The house is much more modest than the other two, only containing 3 bedrooms and two bathrooms, but it’s reported that his sister and other family members have moved in.

The total price of the properties he’s copped in the past year add up to a cool $2.58 million. Not bad for a guy from the trap house.

Apart from all his wealth, Quavo also owns a super luxurious and very expensive Lamborghini. Further, of his car collection, he also has Laren & Hellcat, BMW 650 and GLE63 AMG.

Quavo has lots and lots of fans and it can be proved if you visit any of his social media accounts. In his Instagram he has 8.7million followers while his Twitter has 1.68million followers. And his band Migos has 6million subscribers in YouTube.