history, Nick Saban. You probably know who is the most dominant college football team in the past decade, the answer obviously is Alabama. Thanks to the awesomely talented coach, Nick Saban, who with his determination built a reputation of Alabama and himself. It will be unbelievable to say; Nick was once known as a good college coach who was unable to translate the success to NFL, his hard work lead him to be a 6-time college football champion and a legend in college football history. 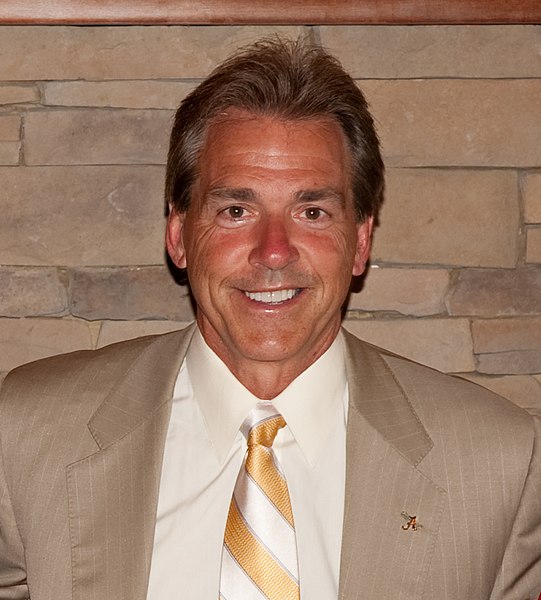 Before jumping off to the details of Nick Saban life, let us first go through this quick summary.

Although most of us know him as Nick Saban, his actual full name is Nicholas Lou Saban Jr. He was born on October 31, 1951, in Fairmont, West Virginia to May and Nick Lou Saban Sr.

Nick Saban grew up in West Virginia itself in a small community of Monongah and went to Monongah High School which is about 25 miles southwest of Morgantown.

Nick went to Kent State University and graduated in 1973 with a bachelor’s degree in business. Now, you might get shocked a bit, as this happened after his marriage, yes you heard it right, Nick went collage after tieing the knot. He further continued his study, and in 1975, he earned a master’s degree in sports administration from Kent State.

history. But Nick had no intention to enter coaching ranks until Don James hired him as a graduate assistant at Kent State. With that start, Nick’s career as a football coach started which led him to the success he probably hadn’t ever dreamed of.

Nick Saban has been the head football coach at the University of Alabama since 2007. Previously, Nick served as head coach of the National Football League’s Miami Dolphins

and the Alabama Crimson Tide to BCS and AP national championship

Nick Saban became the first coach in the football history to win a national championship with two different Football Bowl Subdivision (FBS) schools since the inception of AP Pool in 1936. Then in 2013, Nick was inducted into Alabama Sports Hall of Fame.

Nick Saban is considered to be one of the greatest coaches in college football history. Nick and Bear Bryant is tied for most major college football national championship for a coach in the modern era.

Nick has come a long way as a college football coach. He has tasted the success which only a few has seen and acquire. He was in his mid-20s when he took the first job as a graduate assistant and now he is 67 years old as of 2019.

Nick and Terry got married when Nick was only 21 years old, and so was Terry. The year it happened was December 18, 1971, and till today’s date, they are going strong giving us some major relationship goals.

You probably don’t know this, but Nick was hired as a graduate assistant at Kent State while he was waiting for Terry to graduate.

Nick and Terry’s love story is decades old. The couple first met when they were in seventh grade at 4-H science camp. But it was only when Terry was teaching in West Virginia when their relation got into full swing. The couple got married while Nick was home from school for Christmas break.

Nick and Terry have two children, a daughter, and a son and both of them were adopted.

Nick’s daughter Kristen Saban is an Alabama Graduate and was a former student assistant for Nick’s team.  Kristen got married to Adam Setas, a fellow Alabama graduate and childhood sweetheart in June 2015. She also works as an event manager at a Birmingham-based sports event planning organization called The Bruno Event Team.

Nick’s son Nicholas Saban is also married to the love of his life, Kelse Laney. The couple welcomed their first baby, a daughter in December 2013, whom they later named as Amelie Saban.

Nick Saban Net Worth 2019 and Salary

As per the news and report, Nick’s current salary is around $8.3 million.  His payroll rose up by around $800,000 after he signed a new contract with the University of Alabama in July 2018. Looking at the data of Forbes

that extended the payroll and compensation of the football coach through 2025.

The newly signed contract offers an annual compensation of $7.5 million over previous $6.725 million. It also provides a $400,000 annual rise on salary every year and an $800,000 bonus contract-year completion payment through 2025. According to the new contact, Nick will earn $8.3 million in 2018 season, that breaks down to a salary of $7.5 million and $800,000 for contract-year completion payment.

With such an amount of fortune, Nick lives a very grand lavish life. Out of many properties he owns, Tuscaloosa Lake Home in Clayton, featuring mountains views and lake Burton is one luxurious property. It is a 10,000 square foot property spread out over three levels with six bedrooms which Nick sold in an auction in 2013 for $10.95 million.

Other property that Nick owns includes a house in Baton Rouge, Louisiana and an island house in Boca Grande.

Nick Saban’s car collection too is a luxurious deal. Mercedes Benz S550 and Mercedes-Benz Vans are some of the cars owned by Nick. You may not know the fact that Nick Saban has a dealership with Mercedes-Benz of Birmingham. His partnership with other carmakers includes Porsche, BMW, Jaguar, Audi, and Maserati.

Nick is followed by millions of fans, admirers, and well-wishers in his social media. He is active in all three major social media platform – Facebook, Instagram, and Twitter.