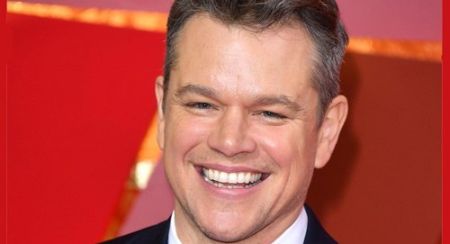 A genuine passion is an energy that drives you crazy, for the fact, after concentrating on what excites you the most. It is a relevant factor of emotions and enthusiasm. Being self-devoted to something peculiar is the most beautiful thing into existence.

The tale of today’s feature lead is quite the same, and he is none other than the famous actor, Matt Damon. He is a passionate man of virtues who prolongs to live for movies and acting.

He is also among the top-grossing actors of all time and listed among Forbes magazine’s highest paid actors.

Here, we will explore concerning details on Matt Damon about his child and wife as well as his career, read the following article.

Matt Damon is a popular actor, screenwriter, and film producer from the United States. Many people acknowledge him for his leading character as Jason Bourne in the Bourne franchise.

Furthermore, he has been featured in multiple films which include the Ocean’s trilogy, ‘The Martian,’ and ‘Invictus’  and many more.

Damon’s birth name is Matthew Paige Damon, who was born in Cambridge, Massachusetts on October 8, 1970. Matt is American by nationality and belongs to the mixed ethnicity of English, Scottish, Welsh, Finnish, Swedish, and Norwegian.

The name of his parents is Kent Telfer Damon and Nancy Carlsson-Paige. His mom used to operate as a professor at Lesley University, and his dad was a business person.

In his family, Damon has two siblings named by Kyle Damon and Sarah Bradford. At the age of two, Damon’s parents were legally separated. Furthermore, Matt had a keen interest in acting since his early times.

Besides, he has a brother named by Kyle, a successful sculptor and artist.

Concerning about his educational background, he joined Cambridge Alternative School. Moving on, he also entered Cambridge Rindge and Latin School. Ultimately for his further studies, he enrolled at Harvard University.

In the beginning, Matt Damon used to function as a theater artist which involved plays like ‘Burn This’ and ‘A… My Name is Alice’. When he was 18 years old, he made his movie debut with a minor role in ‘Mystic Pizza.’

Secondly, he depicted a role in ‘Geronimo: An American Legend.’ He is also a fantastic scriptwriter and has collaborated with Ben Affleck for the movie ‘Good Will Hunting’ in 1997.

Afterward, in 1998, he portrayed the character of Private Ryan in ‘Saving Private Ryan.’ During that same year, he was also featured in the movie ‘Rounders.’ Successfully his film dominance peaked with a string of film roles in the film like ‘Dogma,’ ‘The Talented Mr. Ripley,’ ‘The Legend of Bagger Vance,’ and ‘Finding Forrester.’

With the progress of his movie career, he made frequent appearances in several different films and television series such as ‘Deadpool 2’, ‘Suburbicon,’ ‘Downsizing,’ ‘The Great Wall,’ ‘Jimmy Kimmel Live!’, ‘The Monuments Men’, and ‘30 Rock’ among others.

Additionally, he has written and produced multiple films and TV series like ‘Incorporated,’ ‘The Runner,’ and ‘Speakeasy’ and many more in his career. Collectively, he has more than 76 credits as an actor, 15 credits as a producer and three credits as a writer.

Presently his new movie “Ford Vs. Ferrari Cast And Crew” will be hitting near your cinema theaters starting from November 15, 2019. The film is based upon the real events of the strong-minded technicians and creators who lead to pound Ferrari in the race of making the best racing car.

Damon is also indulged in Philanthropic activities and also is the founding member of H2O Africa Foundation. This organization operates as a charitable part of the Running the Sahara expedition. Similarly, he is also the ambassador for ONEXONE.

In 1998, Damon earned the prestigious Academy Award for ‘Good Will Hunting.’ Additionally, he has also been nominated for Oscar for over four times.

Moreover, he has garnered the Golden Globe, All Def Movie Award, EDA Award, American Cinematheque Award, and ACCA, etc. Altogether, he has 36 accolades and 141 nominations till date.

From his aspiring career as a Hollywood actor, Matt Damon has accumulated a hefty amount of fortune in his acting career. He has a net worth projected around $170 million.

Nevertheless, he has yet to disclose his current salary, which calculates in millions, solely depending upon his recent endeavors and film projects.

Giving an insight into Matt Damon’s love life, he is a married man. He got engaged in September 2005 and after few months got married on December 9, 2005, with actress Luciana Barroso Damon.

The couple first encounter was at the set of the comedy film ‘Stuck on You.’ Since then, they have been together. As of now, the couple is blessed with three children named by Isabella Damon, Gia Zavala, and Stella Zavala.

Following Matt Damon’s rumors and controversies, his remarks on sexual assault gained multiple backlashes. However, he consequently apologized for his comment.

He has also been indulged in a controversy followed up after stating Louis C. K. can be forgiven for his sexual misconduct accusation.

Presently, Matt’s professional and personal life is not rumored at all.

Talking about Matt Damon’s body measurement, he stands tall at the height of 5 feet 10 inches or 178 cm. Also, Matt has a body mass weighing approximately 185 lbs or 84 kg.

Moreover, the color of his hair is light brown and has a pair of blue color eye.

Matt Damon is not active on any social networking sites. He does not hold any accounts on major social media sites such as Facebook, Instagram, and Twitter.