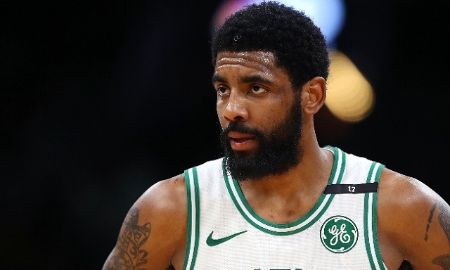 Kyrie Irving is one of a special breed among the best basketball player NBA league has ever seen. He is the top star player and a 2016 NBA Champion.

He is a truly one of a kind when it comes to basketball, but since his departure from Cleveland Cavaliers, his game has been volatile. With the promise of the championship in Boston Celtics he has not been able to compel what he dreamt about.

This a very vital year for him on whether which team he will be signing his new season soon. Let’s pray for the best for this NBA star, who is additionally associated with Nike launching yearly KYRIE shoe and products.

Here, we will explore concerning details on Kyrie Irving about his child and girlfriend as well as his career, read the following article.

Kyrie Irving is a professional basketball player and star player of the NBA league who is currently serving for the Boston Celtics.

He has also played for the USA team winning the gold medal during 2014 FIBA Basketball World Cup and the 2016 Summer Olympics.

Kyrie Andrew Irving was born on March 23, 1992, in Melbourne, Australia to his American Parents. He spent his first times in the Melbourne suburb of Kew. He is American by nationality and belongs to the ethnicity of African-American.

The name of his parents is Drederick and Elizabeth Irving, and the stepson of Shetellia Irving. At the age of four, Kyrie’s mother Elizabeth passed away due to a severe illness. He has two sisters in his family, namely Asia and London.

Highlighting his educational background, he went to Montclair Kimberley Academy and then enrolled in Duke College.

The year 2010 has been a significant year of his career where he was selected in the 2010 McDonald’s All-American game and 2010 Jordan Brand Classic in which he was named co-MVT with Harrison Barnes. Also in June 2010, Irving was a gold medal-winning USA team at the FIBA Americas Under -18 Championship.

He was a star player for the Cavaliers organization of the NBA league between the year of 2011-2017. Since then he has been played two seasons with Boston Celtics.

From his aspiring career as an NBA star, Kyrie Irving has accumulated a hefty net worth amounting $50 million. His salary earnings are over $20 million per season.

Giving an insight into Kyrie Irving’s love life, he is currently in a relationship with Chantal Jeffries since March 2016.

He has a daughter named by Azurie Elizabeth Irving from his previous relationship with Andrea Wilson. His daughter was born on November 23, 2015.

Kyrie Irving was allegedly in a rumor about his girlfriend cheating on him. He was also in controversy when he left an NBA game due to prudent reasons.

Talking about Kyrie Irving’s body measurement, he stands tall at the height of 6 feet 3 inches or 1.91m. Irving has a body mass weighing approximately 88 kg.

The color of Kyrie’s hair is black, and his eye color is dark brown.

You may also connect with us on Instagram and  Facebook for recent updates about your favorite celebrity.a