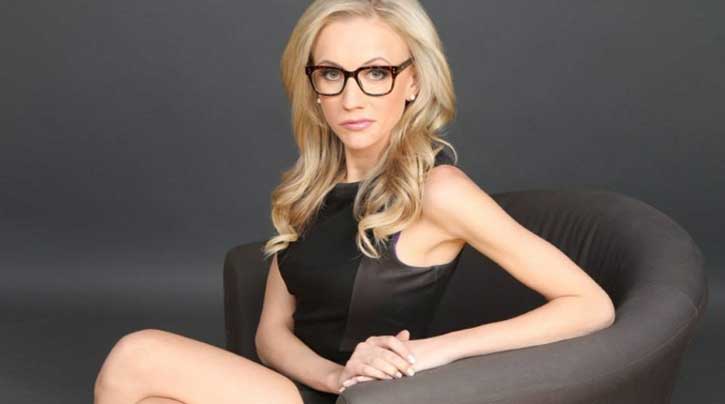 A bold and confident American reporter and comedian; Katherine Timpf calls herself a libertarian. She makes America laugh through her sarcasm in various issues. Her fans call her Kat.

Let’s know more about the life of young and energetic reporter.

Katherine; full name Katherine Clare Timpf; was born in Detroit, on October 28, 1988 and now living in New York. Not much is known about how she grew up. However, her parents are Daniel M. Timpf and Anne Marie.

The confident reporter is very close to her father. She loves being around him and also posts pictures of her with her father in social media time and again. She has posted the picture of the duo in twitter on the occasion of Father’s with a beautiful caption that says that her father is her best friend. Such a beautiful bond, isn’t it?

Timpf belongs to a mixed ethnic background of German and Polish and has an American nationality.

Talking abut her education, Katherine holds a Bachelor’s degree in English from Hillsdale College in 2010. However, not much information is available about her family members, and siblings. Also, there is no mention of the name of her high school.

Kat was into her profession soon after her graduation. It all started after she started working as a video and print reporter for Leadership Institute’s CampusReform.org in Virginia covering the waste, fraud, bias, and misconducts on campuses. She also worked as a digital editor for The Washington Times, a news anchor for NASA Third Rock Radio nad a producer and reporter for Total Traffic Network.

Her popularity made her appear on TV and radio programs like ‘Fox and Friends’, ‘American Live with Megyn Kelly’, and ‘The Nightly Show with Larry Wilmore.’ She also worked as a reporter for ‘National Review Online’, where she created columns and satire pieces addressing American government and culture mixed with sarcasm and humor.

Being a comedian, Kat performed numerous stand-up comedy throughout America. However, her popularity grew exponentially after she appeared in ‘The Gutfeld Show’, an american comedy and politics show in 2015.

On May 1, 2017, Katherine appeared as a co-host in ‘The Fox News Specialist’, an afternoon show for Fox News Channel. The show continued until 7th September 2017, until Eric Bolling another host from the show left the network.

Recently, Kat is with a weekly podcast named ‘The Kat Timpf Show‘, where she discusses any random subjects and also her personal life.

Katherine Timpf: Salary and Net Worth

The beautiful American comedian and TV host has a net worth of $1 million. She makes a handful of money through her career as a reporter. Her annual salary is estimated as $51,000. The fox channel pays her with attractive amount.

Needless to say, Katherine is a beautiful lady, she has perfect body measurements and height. Her dark brown eyes and blond hair  look more appealing.

Katherine has a hourglass body shape with measurement of 34-24-35 inches and wears a bra of 32B. She pays special attention on her physique and regularly visit gyms for workouts. She is 5 feet and 6 inches (1.69 m).

Well it’s hard to believe that a beautiful, confident and well-established personality is unmarried and still single. Rumors existed claiming that Joel Pavelski is her boyfriend, but she confirmed that they are only friends.

But, that does not mean she has not been in any relationship yet.  She once had a boyfriend named Blake but broke up a real time ago. May be she is looking for a guy who will fit in her desires.

If you are wondering, what is Katherine type of man; then have a look on her twitter posts:

Yes. I am looking for a husband that micromanages my face. https://t.co/0PvAk5v8N9

Being a media person, Katherine has been in few controversies. Katherine faced death threats for her remarks on Star Wars fandom on the comedy show Red Eye w/Tom Shillue.

Her comments on Hillary Clinton has also led her towards criticism. It was November 2015, when she commented Clinton as a fake feminist that lead to some backlash.

Adding on, her comment on Donald Trump has also created several controversies.