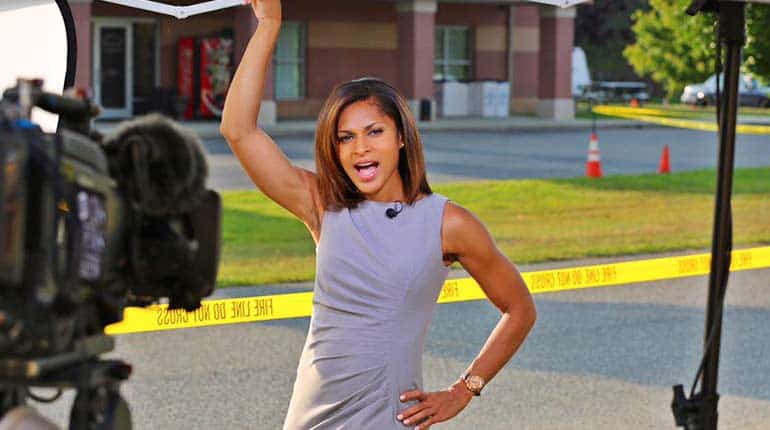 Jericka Duncan is a New York-based correspondent of CBS News. Before landing herself in this position of one of the biggest news channel, Jericka worked very hard to pave her way. However, the struggle never ends, does it? Recently Jericka was threatened by an executive producer of one of the CBS television network show. Why threaten a passionate and hardworking employee? You must stay with us to know the truth. Know more about Jericka Duncan and her life.

Born on August 12, 1983, Jericka Duncan was a very active and athlete kid while growing up. She went to Aurora High School in Ohio, where she was on the basketball team and the track and field team.

After graduating from high school in 2001, Jerick attended Ohio University where she earned her degree in Bachelor of Arts in Communications.

In her college life as well, Jerick continued playing track and field and was even the captain of the team.

After earning her degree, Jericka started her career in 2005 in nearby Elmira, New York, where she covered the news of search of Ralph “Bucky” Phillips, which is the longest chase for a fugitive in state history.

Duncan is also the recipient of a New York State Broadcasters Association Award for Best Spot News Coverage in 2007.

From 2007 to 2010, Jericka Duncan served as a reporter for WIVB (CBS) in Buffalo, New York. In that span, she also received a local Emmy Award in the best morning show category in 2008 for her winter storm coverage in 2008.

She was one of the first reporters at the scene of a plane crash in 2009 near Buffalo which took the lives of 50 peoples. Her passion and determination were impressive at that time, and her coverage even contributed to station winning two national; Edward M. Murroe Awards.

Jericka Duncan is one of the most hardworking and determinant correspondents on CBS.  Since her entry in CBS, Jerick has covered a wide range of national stories and breaking news including the shooting deaths of four Marine and a Navy sailor in Chattanooga, Boston snow storm and the 70th-anniversary celebration of D-Day in Normandy.

However, before starting her career in CBS News in 20013, Jericka Duncan spent three years at the CBS owned TV station at KYW in Philadelphia. Even in career stay at KYW, Jericka was exceptional. She earned the first place from the Associated Press for a series of reports on disabled adults who were held captive in a social security scam. Her bravery earned a nomination for a Mid-Atlantic Emmy Award.

For her contribution to journalism, she was honored by the Philadelphia Association of Black Journalist in 2012 with the Journalist of the Year Award.

Other Associations of Jericka Duncan

Apart from her work as a correspondent, Jericka Duncan has also associated herself in various other fields. She was a fellow at a North Caroline A&T conference on Childhood obesity in 2006.

She is also a member of the National Association of Black Journalists and has volunteered with Big Brothers Big Sisters, the Boys and Girls Club and the Black Leadership Commission on AIDS.

Is Jericka Duncan married? Or Is she dating someone?

Jericka Duncan has made us all praise her passion and contribution to her field. No only her resume, but her beauty is also undeniable. As she is self-accomplished and a very successful woman, man must be a line for her.

However, Jericka is very personal when it comes to her private life. Forget about her dating life; she hasn’t even disclosed the details about her parents. Some speculations were also made on Jericka being a married woman, but they are just rumors, she is yet to get married.

Talking about whom she is dating now, Jericka is currently seeing Dary Clark. Except for the name, we don’t know who is he, or what he does.

Success doesn’t pay off easy. Sometimes we have to face challenges and difficulties in our way. Jericka Duncan also faced the same situation. In 2018, news came out that Jeff Fager was fried as an executive producer of the show 60 Minutes because he was sending threatening messages to Jericka Duncan over sex misconduct reporting.

But Jericka wasn’t the kind of person to take a step back, so she made a decision and exposed those text messages on September 2018. It wasn’t the first time; several women accused Jeff Fager in the past for sexual harassment.

Jericka was widely supported by her co-workers, association, and public for her courageous step.

From her successful run of a career as a news correspondent, Jericka has accumulated a considerable amount of net worth so far.

Jericka is more of a Twitter-person than an Instagram one. In her Twitter account, she shares about her works letting her followers know what she is up to currently.