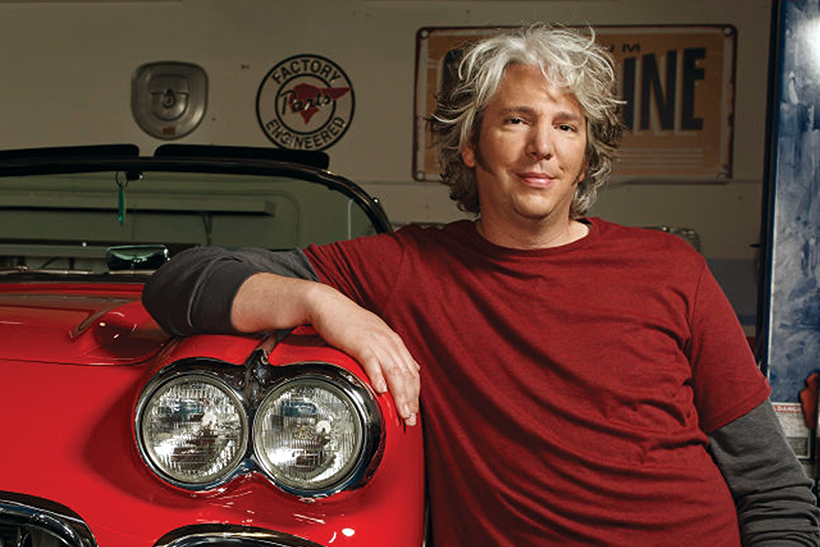 British-born, Edd China quit the Discovery channel’s show ‘Wheeler Dealers’ after 13 seasons in 2017. He worked alongside Mike Brewer for 13 years and both became very close friends between those years.

Mike told Press Association, “I’m obviously upset and gutted that Edd’s decided to leave the programme because we’ve got a very strong relationship and a close bond after 13 years and 135 cars.”

Who is Edd China? Know His Age, Birthdate, and Family

Edd’s full name is Edward John China was born on May 9, 1971, in London, United Kingdom. Talking about his nationality, he is British and his ethnicity is not known.

He was schooled at King Edward’s School, Witley in Surrey and later completed his graduation in engineering product design from London South Bank University. Since an early age, Edd has an interest in cars and mechanics. During his college days, China created the Casual Lofa (driving sofa) which his first project. This was built to raise funds for a Raleigh International expedition to Belize.

Edd China secured a job in television as a special effects technician for a British sitcom Father Ted in 1994 after his new creation of the Casual Lofa. Then he appeared as a guest on Top Gear Live in which he was seen driving the Casual Lofa at the Silverstone ‘Live Arena.’

Following the year, he and his invention were featured on Jeremy Clarkson’s DVD The Most Outrageous Jeremy Clarkson Video In The World… Ever! Furthermore, he appeared on The Culture Show and gave an interview on ITV’s Pulling Power about all of Cummfy Banana’s vehicles.

In the year 2005, Edd China appeared as a celebrity guest on BBC’s Ready Steady Cook and also co-hosted the television series Auto Trader along with Brewer which aired on the Discovery Channel. The same year, the Tv personality presented the miniseries called Classic Car Club which about the history of classic cars

Why did Edd China leave the show ‘Wheeler Dealers’?

His career got a big break after he paired with a TV presenter Mike Brewer for a new programme Wheeler Dealers in 2003 on Discovery Channel. Edd was served as the programme’s mechanic for series 1 to 13 from 2003 to 2017; Ant Anstead in series 14 replaced him.

During the show, he gained both fame, fortune and lots of love from the viewers. In a few years, everything began to change and become more popular. His garage was moved to California by Discovery.

In March 2017, Edd China made an announcement that he was leaving the show. He stated that reason to leave the show via his YouTube channel was disagreement with the production company’s direction for the upcoming series.

He said that the producer wanted to reduce the workshop time in the upcoming season.

‘The workshop jobs are certainly the hardest part of the show to make and reducing their substance and role in the show will save the production considerable time, effort and therefore money. However, thisnew direction is not something I am comfortable with as I feel the corners I was being asked to cut compromised the quality of my work and would erode my integrity as well as that of the show, so I have come to the conclusion that my only option is to let Velocity get on with it, without me.’

After six days, in the next video, Edd spoke about how Brewer telephoned over the weekend saying that he along with his family were receiving online abuse such as death threats after China left the show.

The TV personality China is married. Edd China tied the knot to his gorgeous wife Imogen China. Though their marriage date, year and venue are not available in regards. The two are having a great time as a married couple. Despite being a busy schedule, they always make time for each other and spent quality time like going on a vacation, dinner date and more.

Edd never revealed anything regarding how they met and began their love story. Well maybe, the duo doesn’t want any drama in their life and kept it a low profile.

Edd and Imogen can be seen in public places and attending the events, parties, and function. His wife is a kind and humble person. Reportedly, she worked as the Director of Cummfy Banana Ltd in 2006.

Talking about their children, they haven’t any children yet.

Edd China has worked on different companies as well as in televisions shows where he turned wrecks into goers and give old vehicles new designs by fettling them. Throughout the years, he dedicated working on his forte and earns an impressive worth.

Edd China has a net worth of $3 million.

Apart from shows, Edd makes considerable money from his garage ‘Grease Junkie.’ Further, Edd is an authored published a book titled ‘Grease Junkie: Tall Stories and Wheel Adventures‘ which would be expected to be released on May 16, 2019.

On May 1, 2018, he premiered his series, Edd China’s Garage Revival and continuously uploads more videos on his YouTube and answers questions from fans on the channel in the AskEdd series. He has a whooping subscriber of 384k on his channel.