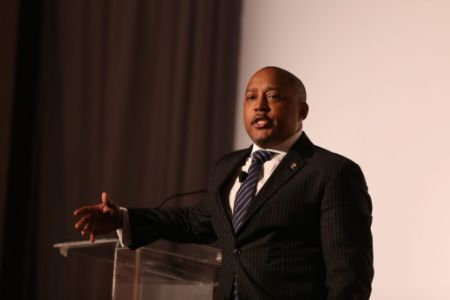 While speaking about the all rounded top business people and entrepreneurs, Daymond John holds a respectable position with the skills and intellect which can make people in awe.

He attains the authority of founder and Chief Executive Officer of FUBU. He is also a widely acclaimed businessman and a successful TV personality who reflects a perfect blend comprising his entrepreneurial life with his life as a TV figure.

Here, we will explore concerning details on  Daymond John about his child and girlfriend as well as his career, read the following article.

He is widely known as the founder, president, and CEO of FUBU. Also, he features as an investor on the ABC reality TV series ‘Shark Tank.’

Daymond Garfield John was born on February 23, 1969, in New York City, New York. He is American by nationality, but his ethnicity is not known.

The name of his parents is Garfield and Margot John. Daymond spent most of the childhood years while growing up in the Queens neighborhood of Hollis.

Real States Broker Steve Gold Is Looking For A Woman Who Likes Dog. Check Out His Net Worth, Career, and Bio

Speaking about his educational background, John went to Bayside High School. During his high school, he was involved in a program which permitted him to operate a full-time job.

In the beginning, Daymond John began his professional life by commencing a commuter van service. Soon afterward, he operated his FUBU venture in his mother’s house at Hollis which has now gained more than $6 billion in global sales. Additionally, it has also been emphasized at the Smithsonian’s National Museum of African-American History and Culture.

Furthermore, in 2009 he entered as the board member of ‘Shark Tank.’ He is also the CEO and founder of The Shark Group.

Daymond John is a  man of many talents, and he is a firm believer of passionate and motivational talking. He is regarded as a public speaker. John is the brand ambassador of the e-commerce company, Shopify.

He is acclaimed for being the orator of California First Lady Maria Shriver’s Women’s Conference, AT & T’s History Makers Tour, and Babson College School of Entrepreneurship and many more as well.

Proudly, Daymond John, he has six credits as an actor and three credits as a producer. He has featured in several films and TV shows titled Dr. Ken, Sharknado 2: The Second One, The Neighbors, CollegeHumor Originals, the Big Idea with Donny Deutsch, Rachael Ray, Harry, The Dr. Oz Show, Home & Family, Wendy: The Wendy Williams Show, Good Morning America, Dancing With The Stars, and many more.

Highlighting his accolades and honors, Daymond John has been awarded the Brandweek Marketer of the Year, the Advertising Age marketing 1000 Award for Outstanding Ad Campaign.

He has also garnered the NAACP Entrepreneurs of the Year Award, the Essence Award and Crain’s New York Business Forty Under Forty Award and many more.

From his aspiring career, Daymond John is a self-made man who has accomplished a series of achievements in multiple fields. John has accumulated a hefty net worth amounting $300 million.

However, he has yet to mention his current wages and salary per anum, which depends upon his recent endeavors and projects.

Giving an insight into Daymond John’s love life, he was previously a married man. Now he is a father of three children and is currently engaged with Heather Taras. With her, he has a daughter named by Minka Jagger John.

There are no adequate details concerning his past married life. Besides, John has two daughters from his past relationship named by Yasmeen and Destiny.

There have not been any significant rumors circulating his personal and professional life at the moment,

Talking about Daymond John’s body measurement, he stands tall at the height of 5 feet 6 inches or 1.69m.

The color of his hair and eye color is black.

Mentorship got me to where I am today. _ For me, mentorship was, and still is, everything. Mentors are all around you, teaching and leading by example. They're what help you understand your mistakes, and how you can grow from them. _ Tag someone who has mentored you in some way shape or form in the comments below ??