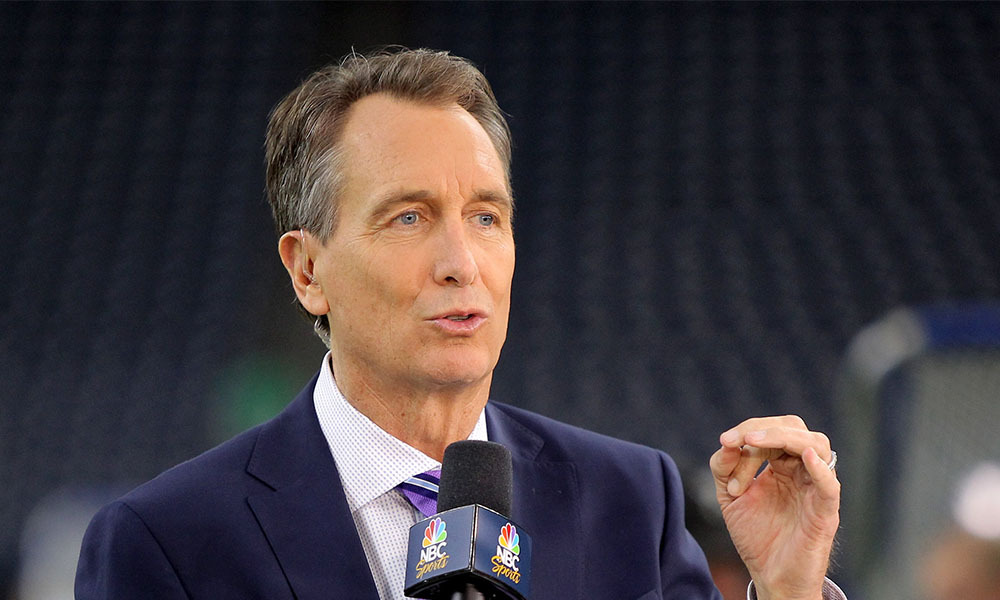 Then a college football player

commentator, whichever it is Cris Collinsworth

has nailed both of it. His success story is quite simple, but it involves a lot of hard work, passion, and determination. Today, he is one of the most successful and respect sports commentator with 15 Sports Emmy Awards. Thinking about how a player became a media personality, we are left with nothing but theories. But above all, one thing is for sure, Cris Collinsworth

made it sure to shine in whichever field he would embrace. Well, success is determined by our attitude and Cris is the best example of it.

A Quick Summary of Cris Collinsworth

was born on January 27, 1959, in Dayton, Ohio, the United States and his full name is Anthony Cris Collinsworth.

His parents are Abraham Lincoln “Abe” Collinsworth and Donetta Browing Collinsworth. You might be intrigued by Cris father’s name, but don’t be because he was born on Abraham Lincoln’s birthday, so Cris grandparents named him after the president out of total respect.

Collinsworth family moved to Titusville, Florida when he was only four, where he grew up along with his brother. Cris went to Astronaut High School. We might know Cris Collinsworth

as a sports broadcaster, but actually, he has a Juris Doctor degree from the University of Cincinnati College of Law which he earned in 1991.

height is way too impressive to be an athlete. He stands 6 feet and 5 inches tall. With such a height and father himself as an athlete, Cris was involved in football since he was in high school.

But this just his college career, his professional career was yet to be started. He was drafted by Cincinnati Bengals

in the second round of 1981 NFL Draft, where he spent his entire eight years of his NFL

After retiring as an NFL player, Cris Collinsworth

took a step towards a broadcasting career. He started as a sports

radio talk show host on Cincinnati station WLW. He was a guest host for Bob Trumpy

, but when Trumpy accepted more television

assignments he took over the show for full-time.

In his broadcasting career, Cris Collinsworth

involved in many shows of several channels. Let us know some prominent among them. In 1989, he joined HBO

lost their broadcast right to CBS

. By 2006, Criss was seen in three networks during football season.

as a commentator in the NBC broadcasts

in Beijing. Cris and Bod paired once again during the 2010 Winter Olympics

Awards and Achievements by Cris Collinsworth

In his long and successful career, Cris has received several honorary awards. In April 1998, he won a Sports Emmy Award

as Outstanding Studio Analyst and the second one in 1999. Then in 2001, his name was inducted into the Academic All-America Hall of fame.

For two years in a row in 2003 and 2004, he received his third and fourth Sports Emmy Awards as Outstanding Personality/Studio Analyst. In May 2006, he received his fifth Emmy in the same category.

Wife and Children of Cris Collinsworth

Cris Collinsworth is a married man. He is married to Holly Baknkemper, and now it has been three decades of their togetherness, amazing, right?

The couple met when both of them were in the University of Cincinnati in a quest to earn their degree. Holly graduated in 1988, while Cris in 1991. Like Cris Collinsworth,

Holly has a degree in law and continues to practice law, unlike her husband.

Coming such a long way through, Cris and Holy are also the parents of four children: two sons and two daughter – Austin, Ashely, Katie, and Jack. And recently he has been promoted to grandfather too.

Now here is my Grandbaby ready for SNF. ❤️

Cris Collinsworth is one of the most successful sports broadcasters. He is associated with many big channels like Showtime, CBS and the NFL Network. Not to forget he had a very successful college football career as well.

He is also the owner of Pro Football Focus, a website that focuses on a thorough analysis of the National Football Leagues (NFL)

football in the United States. The site is visited by millions of football lovers from around the world.

Cris Collinsworth net worth as of 2019 amounts to $15 million.

-A five-year contract with Fox as a part of NFL Sunday pregame show in 2009: $5 million

However, his present salary is estimated at between $1 to $2 million. His reporting partner of 2018 Super Bowl, Al Michales was $5 million annually, so Cris Collinsworth

is expected to be no less than $3 million.

With such an amount of net worth and annual salary, Cris life is way more luxurious. Apart from his fortune, his accommodation also very impressive. To elaborate his lavish lifestyle, Cris has brought a super luxurious mansion in Fort Thomas, Kentucky. Although no news has come regarding the exact worth of his mansion, looking at the pictures one can easily guess it goes to millions of dollars.

‘s social media accounts his very interesting. He is followed by a large number of people in Instagram and Twitter who are his fans, well-wishers and admirers of his work and pictures of friends and family, his shows and funny tweets totally worth it.

Congratulations to the Chiefs. Couldn’t imagine a better 10th season in the booth with my buddy Al