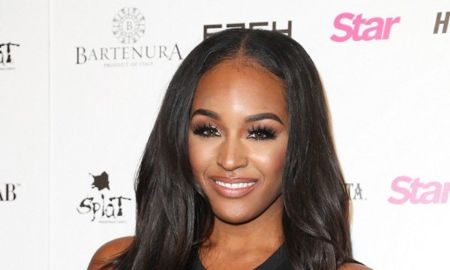 Brandi Maxiell is a reality Tv star and a strong and bold woman who fought with cancer during her early stages of life.

Brandi was diagnosed with ovarian cancer and had a face many bumps throughout her career. Her love life was a disgrace which had cheated consecutively far more than she could ever estimate.

Despite all the facts, she stayed true to her love and continued living with all the flaws. She is also an exemplary businesswoman and a caring mother.

Besides, she is famous for being the wife of favorite NBA player Jason Maxiell.

Here, we will explore concerning details on Brandi Maxiell about her child and husband as well as her career, read the following article.

Brandi Maxiell is an American actress and reality Tv figure from the United States. She is mainly recognized for being featured on the VH1 reality show Basketball Wives LA.

Brandi Maxiell’s birth name is Brandi M. Duncan, who was born on May 21, 1983, in Dallas, Texas, the United States of America. Maxiell nationality is American and belongs to the African American descent.

The name of her mother is Terri Duncan who single-handedly raised and groomed her. In contempt of the fact, Brandi adores both her biological father and stepfather evenly.

Highlighting Brandi’s early life and childhood details, there is not much information to share.

Concerning her educational background, she completed her degree from the University of North Texas in the year 2007.

There are not many details about Brandi’s early professional career. In the beginning, she got featured as a participant on the VH1 reality show Basketball Wives LA. Brandi later claimed that she used that platform to promote education on ovarian cancer.

Besides this, Brandi Maxiell is also the proprietor of Midway Salon & Suites. She has also appeared on several TV shows and programs which involves Access Hollywood and The Arsenio Hall Show.

When Brandi was 24 years old, she suffered ovarian cancer. Luckily she got over the surgery and treatment process quicker and easier than expected while it was in stage 1. After some chemotherapy treatments, she was eventually stated cancer-free around the year in 2008.

Brandi Maxiell has accumulated a hefty amount of fortune from her recent endeavors and beauty product projects. She is projected to have a net worth of $2.5 million.

However, she has yet to disclose her current salary and annual income. Her husband Jason Maxiell has a net worth about $8 million.

Giving an insight into the personal life of Brandi Maxiell, she is a married woman. She exchanged her wedding vows to former NBA power forward Jason Maxiell on August 1, 2010, in Denton County, Texas.

The couple’s first encounter was during their high school time and began their love life ever since.

The duo is blessed with a child name by Jason Maxiell II. The baby boy was born on 11 November 2011.

Despite some alleged sex opinions of Brandi Maxiell, the couple has a beautiful bond with each other. They lead a happy and prosperous life with their sweet little family.

Concerning on Brandi’s rumors and controversies, there have been no significant rumors except a divorce case with her husband Jason which was outraged in the media.

Presently, Brandi’s personal and professional life is not rumored at all.

Talking about Brandi’s body measurement, she has an average height of 5 feet 7 inches or 1.70 m. Maxiell’s has a body mass weighing approximately 62kg.

The color of her hair is black and has a pair of beautiful dark brown eyes. She has a perfect curvy figure with her body stats at 37-25-37 inches. Moreover, her dress size is of 10(US), and her shoe size is 9.5(US).

Happy Father’s Day To Baby Jason Hero AND The Best Dad Ever!!! For a man that’s never had a father you sure know how to do your job well. Thank you Big Guy!!!! We love you ?