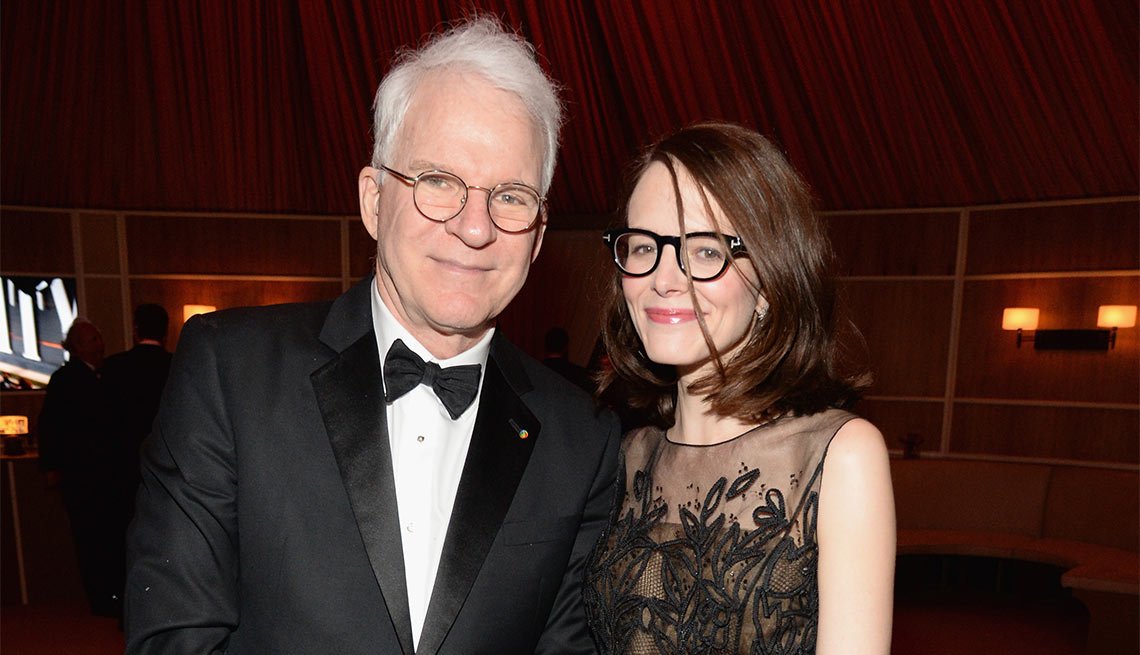 Steve Martin is a comedian, actor, and writer whose know for his role in movies like ‘The Jerk’ and ‘Father of the Bride.’But do you who is Steve’s wife?

Anne Stringfield is known as the second wife of Steve Martin. Annie is a successful writer and a former staff of ‘The New York magazine.’ Despite more than two decades of age-gap between Anne and Steve, they are so much in love with each other.

Anne Stringfield got married to Steve Martin in Los Angeles home on July 28, 2007, an actor and comedian. The surprised wedding which had not been informed beforehand of the around 75 guests including Tom Hanks, Eugene Levy, Diane Keaton, Ricky Jane, Carl Reiner and also attended by Martin’s friend, publicist Alan Nierob.

All the guests thought that they were attending the home party in Los Angeles. Former Nebraska Senator Bob Kerry presided the surprise wedding ceremony. Also, Lorne Michaels, creator of the famous show Saturday Night Live was the best man attended the wedding.

At the time, Anne was 35 and Martin was 61 years. Anne’s husband is 26 years older than her but their love proved that age is just a number. They have been together for more than a decade.

Before Anne, her husband, Martin was married to his first wife,  actress Victoria Tennant from November 1986 to 1994. Further to speak about Steve’s relationship, he dated an actress, singer, and dancer, Bernadette Peters fr0m in the late 1970s to early 1980s. They also co-starred together in tow movies, The Jerk, and Pennies from Heaven.

Anne and Martin welcomed their child, a baby daughter after 7 years of marriage. According to New York, their baby was born in December 2012. But they didn’t give any details of the child including date of birth.

Steve Martin became a dad at the age of 67 for the first time and managed to keep it secret from the media for more than a month. Her husband has no children from his previous relationship.

Anne’s husband and kid barely appeared in front of the camera. The whole family was once spotted in Beverly Hills together in November 2016.

Anne rarely made her appearances in the red carpet with her husband, Steve Martin. During the  43rd American Film Institute Life Achievement Award, she gained unexpected media coverage when Martin’s co-star and friend, Tina Fey said about Anne in a hilarious heartwarming speech.

Tina Fey pointed out Anne’s resemblance to her said,

“You have helped me so many times and in so many ways: showing up for SNL monologues; being a guest star on our dumb TV show; marrying a woman who is the younger, thinner, smarter version of me, just to keep me hustling. Always have my best interests at heart. It’s an honor…”

Stringfield got embarrassed by the attention whereas Martin looked back at his life pictures in the new issue of PEOPLE. Steve Martin told People magazine that his wife looked like Tina Fey.

Despite being the Hollywood celebrity’s wife, Anne Stringfield loved to stay out of the limelight and keeps a low profile. She is a camera shy person. You might be thinking what her profession is?

Anne is an American writer and a former staff of “The New York magazine.” She worked for the New York Magazine as a fact-checker and even writes her own piece.

She also wrote art and off-Broadway plays review. In the mid-2000s, Anne was assigned to check a comedy piece by a famous star. Apart from that, she is an avid art collector and a trustee of the Los Angeles Museum of Art.

Moreover, she has done some freelance writing for the Vogue magazine.

Anne Stringfield is a writer. She never talked about her total assets and income. She earned decent money from working in different journals. But her husband is a millionaire who earns a hefty amount of money as an actor.

Steve Martin’s net worth is $130 million.

Comedian, actor and writer, Steve Martin was born on August 14, 1945, in Waco,  the son of Mary Lee and Glenn Vernon Martin, a real estate salesman, and aspiring actor. Steve left college in 1967 to write for TV.

He won Grammy Awards for Let’s Get Small and A Wild and Crazy Guy. He made his debut in the film The Jerk and later he starred in the movie Father of the Bride which became commercially successful and also appeared in numerous movies such as All of Me, Little Shop of Horrors and more.

In 2009, Martin released The Crow, a collection of banjo compositions that went on to earn him the Grammy for Bluegrass Album of the Year, and two follow-up albums.

Anne Powell Stringfield was born in 1972 to Dr. James Stringfield and Margo Stringfield in Pensacola, Florida. Her father is a pulmonologist and mother worked as an archeologist at the University of West Florida.

She is the eldest of child pf her parents and has a younger sister. She studied at Pensacola High School and graduated from Davidson College in 1994.

Stringfield is not active on any social media but you may follow her husband’s Twitter to know the latest update.