Home » Personal Life » Toccara Jones: How is The America’s Next Top Model Finalist? Know Her Net Worth, Boyfriend, Bio

Toccara Jones: How is The America’s Next Top Model Finalist? Know Her Net Worth, Boyfriend, Bio 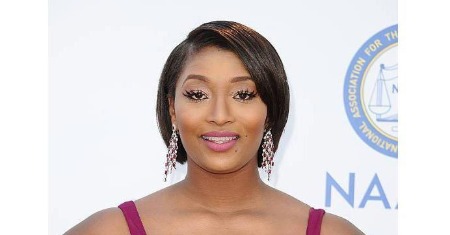 If you struggle with your body size then you are not alone, but there are plenty to proud of who they actually are. Likewise, Toccara Jones is the one who appeared in America’s Next Top Model, showing off her trademark curves and loses so many weight.

Toccara is a model, TV personality, singer and actress who summoned millions net worth from the modeling as well as Tv appearance. She was a competitor on the second season of the VH1 series Celebrity Fit Club in 2008. To know more about her stay with us.

African-American model, Toccara Elaine Jones was born on March 13, 1981, in Dayton, Ohio, U.S., making age 36. Information about her early life and parents are not available on the internet. Jones studied at  Stivers School for the Arts where she majored in theatre and dance.

Standing 5 feet 9 inches, Toccara Jones recognized by the public after she appeared on the third season of America’s Got Talent. Toccara was the twelve finalists for Cycle 3 and who ‘Covergirl of the Week’ for five times. Also, Jones was voted as one of the most memorable contestants by AOLEntertaimnet.

After that, Toccara is signed with Wilhelmina Models as a plus-size model. Further, she appeared on the covers of multiple magazines such as Be, Black Men, Balck Hair, The Next Level Magazine, Plus Model, and Ebony.

In addition to her modeling career, the plus-size model made her appearance on the television. Jones has co-hosted an episode of 106 & Park, and game show Take the Cake for the BET network.

Moreover, Jones hosted America’s Next Thick and Sexy Model, and in 2006, she appeared in the reality show for VH1, Celebrity Paranormal Project.

Rachael Leigh Cook: Split Up From The Originals Star, Daniel Gillies After 15 years of Marriage.

Additionally, she appeared in another reality series The Ultimate Merger in 2001. Besides, Jones released her own workout DVD titled Toccara’s Fabulous Work-Out for Real Size Women.

The black beauty competed on the second season of VH1 series Celebrity Fit Club in 2008. During the period, she lost weight about 15 kg to get down to 78 kg.

However, to get the perfect shape, she gained about 6.4 kg for the next season Celebrity Fit Club: Boot Camp. As a result, Jones maintained a perfect boy of 166 pounds.

The supermodel has a new man in her life, but who is he and how long they have been together from now?

Her boyfriend even featured in the music videos like Rihanna’s Rude Boy, Nicki Minaj’s Super Bass, and Usher’s Little Freak.

Toccara and Jason met on the dating show, but their relationship did not limit within the show and continued even after that, get a chance to know more about each other. They have been together for so many years and enjoying each other’s company.

So far, the pair has no plans of getting married anytime soon.

Toccara Jones earns most of her wealth comes from modeling and acting as well as the host. Throughout her career, Toccara appeared on the cover of many magazines and editorials. Jones has a net worth of $1.5 million, as of 2019.

The plus-size model shares overindulging pictures of herself on social media platforms. She has over 146k followers on Instagram and above 108k followers on Twitter. Besides, Jones has her website where you can get ladies apparel too.