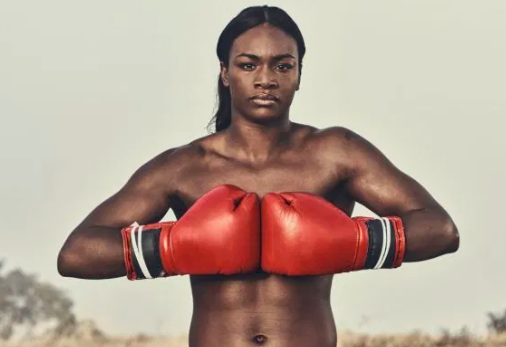 Discover how this woman transformed from being a bullied child to becoming one of the most feared and highest paid female fighters in the ring.

Try to mess with her and she’ll beat the living headlights out of you. At 25, female pro boxer Claressa Shields holds championships in three weight classes.  In fact,  BoxRec ranks her as the world’s best active female light middleweight fighter, as of January 2020.

Being the undisputed female middleweight champion of the world, her impressive professional record stands at 10-0, two of which were knockouts.  She is a self- proclaimed Greatest Woman of All Time (GWOAT), much to the chagrin of a few contenders.

Shields was born and raised in Flint, Michigan. Her parents are Marcella Adams and Clarence “Bo” Shields, himself a former boxer who played in underground circles. Claressa’s father was jailed from 1996 to 2004, after being found guilty of breaking-and-entering.

According to Claressa, her mother Marcella was an alcoholic and couldn’t keep a job. The matriarch would disappear for days, and she would be left tending to her three siblings. There were days when the children had nothing to eat.

As a child, Claressa was extremely shy, stick-thin and had unruly hair. At age five, her mother’s boyfriend allegedly raped her. The assault happened a few times when Marcela reported to Wal-Mart for work. When Claressa told her mother, she did not believe her.

They later sent Claressa to the hospital, but it seemed too much time had passed to determine the boyfriend’s guilt. He was later beaten up badly by a relative and left Flint.

Joanne Adams, her grandmother, knew she was telling the truth and bought a doll to let Claressa share what happened. Shields is thankful to her grandmother for teaching her not to accept gender restrictions. The female boxer wrote a poignant tribute letter to her grandmother in 2018, almost eight years after Joanne died of cancer. 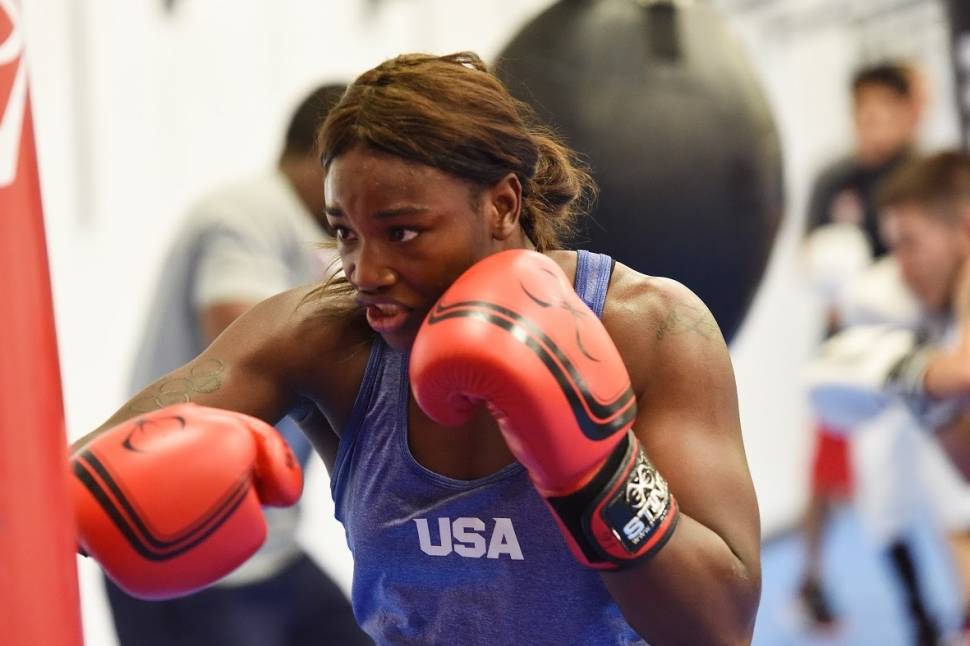 A quiet kid, she barely spoke in school and was likely bullied by the other kids in school. She did not fight back until one day, when she was 11 years old, and had had enough, she punched a bully and sent the kid to the ground.

In their renewed bond following his prison release, Bo spoke to Claressa about Laila Ali, daughter of boxing legend Muhammad Ali. Laila would then pique Claressa’s interest in the sport, being that their fathers are both boxers.

Claressa was a high school junior when she started going to the Berston Field House in Flint, where she would meet her future coach and trainer, Jason Crutchfield.

Holding a record of 25 wins and no losses at that time, she won the Women’s Elite Continental Championships against three-time defending world champion Mary Spencer.

Shields competed in her first open- division tournament and won the middleweight title and also qualified for the U.S. Olympic Trials in 2011.

In February 2012, Shields, who was only 16, became the youngest boxer to take part in the US Olympic trials. She was declared the middleweight (165 lb/75 kg) division winner after beating reigning national champion, Franchón Crews-Dezurn, the 2010 world champion, Andrecia Wasson, and Pittsburgh’s Tika Hemingway.

Her amateur boxing record was 77 wins, of which 19 were via knockout.

Shields further became the first American female boxer to win an Olympic gold medal, as it was the first time women’s boxing became an Olympic event in 2012. In London, where the 2012 Summer Olympics was held, Shields beat Russian boxer  Nadezda Torlopova, with a score of 19–12.

Along with her award-laden amateur career, Shields won her second Olympic gold medal at the 2016 Olympics, making her the first American boxer—female or male—to win consecutive boxing Olympic medals.

She won the World Championship gold medal in 2014 and in 2015 and became the first American to win titles in women’s boxing at the Olympics and Pan American Games. 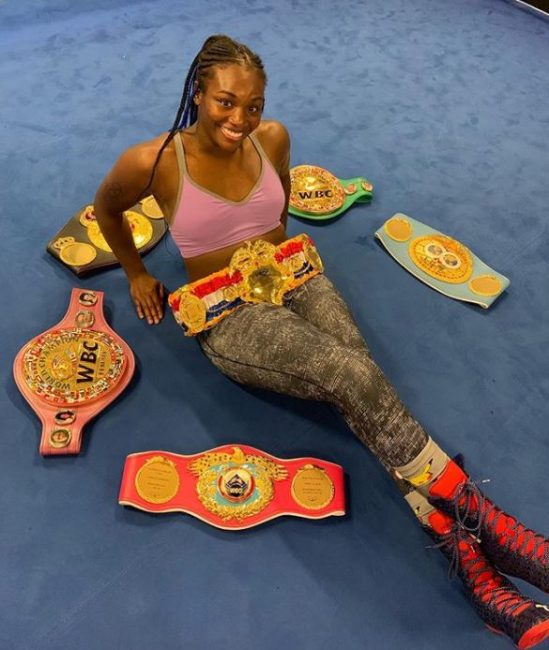 A professional boxer since November 2016, she won against her first match as a pro boxer with Franchón Crews-Dezurn, by unanimous decision.

In December 2018,  Claressa Shields’ win against Femke Hermans attracted the highest ratings during HBO’s last boxing broadcast. The fight opened HBO’s “Boxing After Dark” triple header and drew in up to 379,000 viewers. THe 10-rounder fight was for IBF, WBC and WBA middleweight titles.

How Much Did Claressa Shields Earn?

It was unclear how much these fights brought into the female boxers’ purses, but for reference in 2005, Christy Martin and Lucia Rijker were supposed to have a high-paying fight.

Each was guaranteed a base pay of $250K but the winner would be rewarded with a $500K, increasing the winner’s income to $750K and the total pot to $1 million.

Unfortunately, it did not push through. 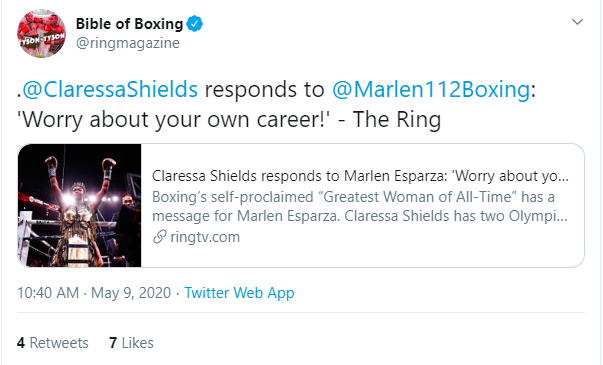 Outside the boxing ring, Shields has found a foe in fellow pro boxer,  Marlen Esparza.

Shields’ self-proclamation as boxing’s “Greatest Woman of All-Time” (GWOAT) did not sit well with the 2010-2014 Houston Fighter Of The Year, saying it was inappropriate and disrespectful to the sport and its fighters.

As a response, Shields told Esparza to worry about her own career and not Shields.

The verbal spat happened on the heels of Esparza’s loss to Seniesa Estrada last November 2019.

According to the Wall Street Journal, in 2016, Shields’ income during that period was mainly a $3K monthly stipend besides the $25K reward as one of the gold medalists. But later that year, she snagged 2016 endorsements for Audi, McDonald’s, Mini, Powerade, and Swimsuits for All.

Her growing fame comes with a ballooning net worth in the years that followed. For instance, her 2019 estimated income from two high drawing pay-per- view fights for HBO might have easily earned her $1M.

Her Patreon Account charges subscribers with membership costs of $45 for 30-minute Zoom one-on-one workout, $75 for one-on-one training, and $100 for boxing training fundamentals.

Shields charges $20K to $ 30K for her appearances, such as keynote speech, virtual meetings, corporate appearance, grand opening, product announcement, moderated Q&A or for an exclusive meet and greet, according to  AthleteSpeakers.

In 2019, she posted a slick luxury orange convertible car—a 2020 Chevrolet Corvette that costs around $66K. She bought her own house for an unknown amount, in 2020. 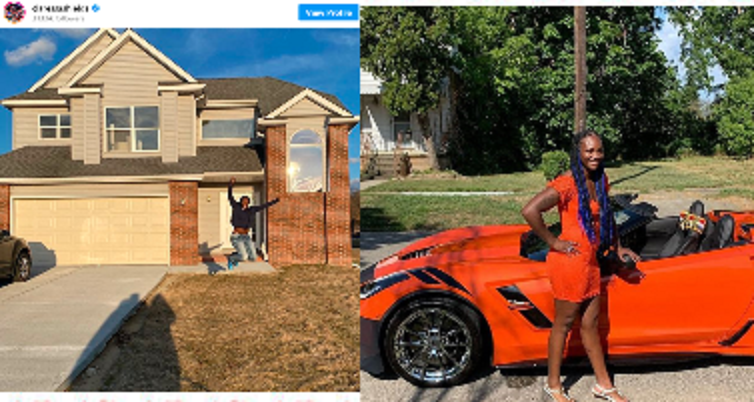