Patricia came to international fame after marrying a famous American comedian, and actor, Rob Schneider. The couple dated for several years and got married in 2011 in a private ceremony. The Happy Couple https://www.instagram.com/p/BeohJ8HHas-/?taken-by=iampatriciamaya The couple dated for three years and decided to tie the knot in 2011.

When the couple got married in 2011, the actresses popularity furthered because of Rob’s international fame in the Hollywood industry. The marriage is Rob's third marriage and the first of Patricia. The couple also shares their home with musician Elle King, daughter of Rob from his first marriage with model London King.

Patricia and Rob share two daughters together. Their name is Miranda Schneider and Madeline Schneider. Their marriage enters the eighth year and this is the longest lasted marriage of Rob Schneider. Maybe the third time is the charm for poor old Rob.

Net Worth of Patricia Azarcoya Schneider

Patricia Azarcoya Schneider hasn't had a long American show career and has just started to flourish as a show host and a writer and a producer. Her net worth is not significant to be calculated yet, but her famed husband's net worth is around $15 million.

Gorgeous Curves of Patricia Azarcoya Schneider https://www.instagram.com/p/BisTRpAHsid/?hl=en&taken-by=iampatriciamaya Rob is still starring in movies, and with his wife starting to work as well, it all looks good for the Schneider family.

Patricia is starting to gather praises and attracting interests from Hollywood directors through her performance in the show Real Rob. The future looks bright for this gorgeous latina.

Burglars broke into the couple's mansion in the Los Angeles neighborhood of Encino on 15th June 2018 on a Friday evening when the couple was out having dinner.

Hundreds of thousands of dollars worth of property were stolen from the home, which unfortunately included a diamond engagement ring of Patricia that cost around $120,000. 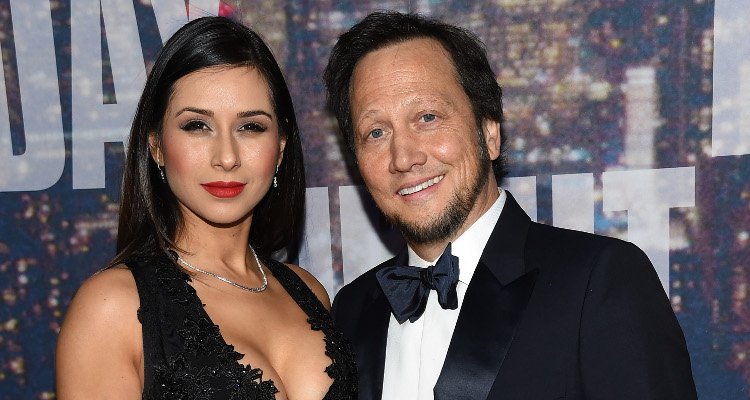 Patricia Azarcoya Schneider is gradually gaining fame and recognition through the Netflix series and has been a popular figure on Instagram and Twitter.

Her original Instagram account under the name @iampatriciamaya and has 28,000 followers. She constantly posts her beautiful personal photos and also images related to her show in her account.

She was born on 6th March 1988 in Mexico City. Patricia was born to Mexican parents but now holds American citizenship. She started her career as a model and as an actor in Mexican TV. Then she worked as a producer on several Mexican films and TV series, before moving to the USA.

Patricia with her two daughters https://www.instagram.com/p/BinVAgxHWdi/?hl=en&taken-by=iampatriciamaya During the season of Real Rob, Patricia told that she was 29 years of age and we believe her age is 35 years. Patricia despite giving birth to two babies has an impressive curvilinear body.

She exercises rigorously to keep her fit and healthy. Patricia has fluent Spanish speaking capability and also speaks some Portuguese. She is active in social media through Twitter and Instagram accounts. Patricia is a keen soccer lover and follows the Mexican Soccer League weekly.

Patricia started her professional career in the USA in 2007 when she produced her first television series El Monchis. She is also involved in hits as " Cuéntame cómo pasó" and "Guerra De Chistes"

In 2006, she played a role in a short film "Alkahest" Patricia Azarcoya Schneider moved to Los Angeles owing to a TV project and met Rob. At present, Patricia appears on Netflix’s series, ‘Real Rob,’ Season 2 along with her husband and daughter Miranda.

In the second season, she became the most loved star by the fans, overshadowing her husband, who is supposed to be the leading star of the show. The fans praised her comic timing more than her husband's and are stealing the spotlight of the show.

She also contributes to writing the script for the show and also directs the show. Patricia and Rob have two daughters, and they all live together.

TODAY'S MOST POPULAR
CINEMA
Top 3 comedies that will make you laugh to tears
A $14.5 million worth of luxury watches were stolen from a Berlin department store
Brazil's team doctor on the possibility of Neymar playing against South Korea
Jennifer Lopez shares a picture of her son Max lying on her husband Ben Affleck
Tesla has delivered its first electric semi truck
"Indiana Jones" 5th installment trailer and title released.
Volodymyr Zelensky: "We understand that terrorists are planning new attacks"
Discovered: The drug for diabetes causes enormous problems for the offspring!
An unexpected desert scene: A fish-shaped rock emerges from the sand
THIS WEEK MOST POPULAR
ATHLETES
Romelu Lukaku memes flood the internet after Belgium's shock loss against Croatia
Volodymyr Zelensky angry with Elon Musk: Come to Ukraine
Kim Kardashian declined the offer to join the Balenciaga campaign after the scandal
Simon Cowell trolled after his dramatic appearance transformation
Fatty Liver: The causes
The rapper Kanye West praising Hitler and defending the Nazis
The PC version of The Callisto Protocol disappointed gamers
Hailey Bieber insists she isn't pregnant as she discloses ovarian cyst
Top 3 scariest horror movies!
The five most common signs of a heart attack that appear one month before