In the dusty New Mexico desert, Elvis Presley's private plane, the Lockheed 1329 JetStar, awaits a new owner. The "King of Rock and Roll" bought the red and white JetStar in 1976 for $840,000, or about $4.4 million at today's exchange rate.

"Elvis and his effect on the music industry are known the world over, and this opportunity for a new owner to acquire an extravagant piece of his aviation past is a momentous occasion with untold room for flights of rock ‘n’ roll fancy," the listing reads.

The plane was then considered to be a luxury type of aircraft that was reserved only for celebrities and CEOs of large companies. There was room for nine passengers, along with three crew members, on board this jet that had four engines mounted at the back of the fuselage.

It had a top speed of about 909 km/h with a range of about 4,023 km. A red carpet and wooden paneling dominate the interior of the room, which also has gold details and red velvet with gold details. Six plush chairs and a sofa are available as part of the seating area.

There is a vintage media cabinet with a TV, audio cassette player, and RCA video player, as well as a microwave and drinks cart in the kitchen, along with a video player. 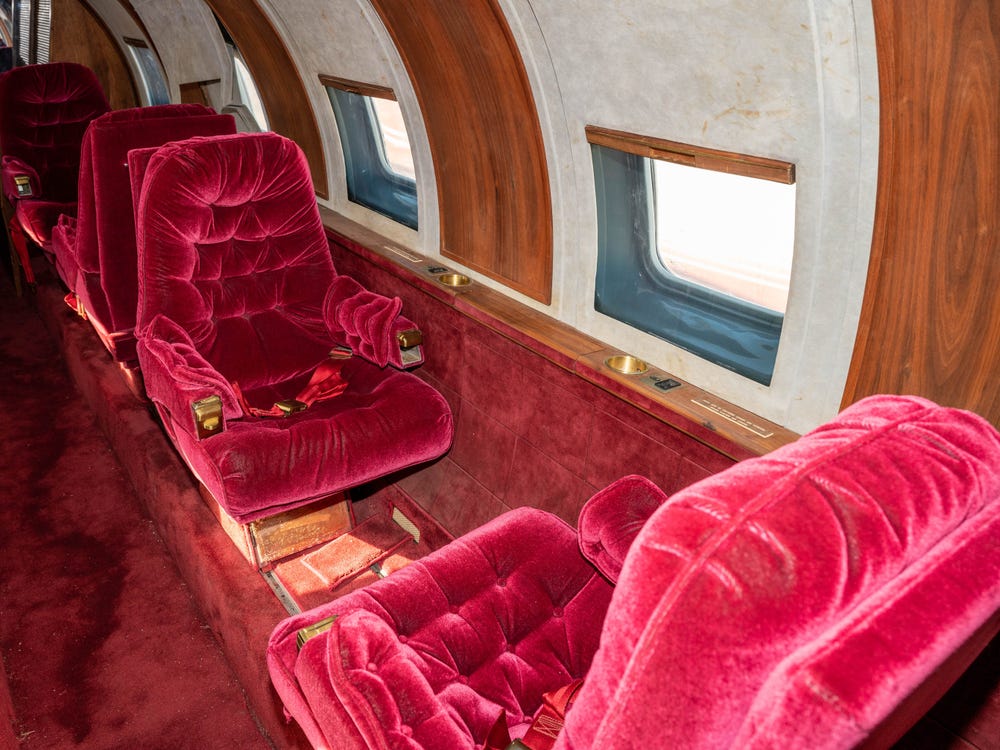 The legendary singer owned more than one Lockheed plane.

Besides the Convair 880, Presley also owned a custom Convair 880 that is currently on display at Graceland, Memphis, called Lisa Marie. Elvis released his album "Jailhouse Rock" in 1957, the same year Lockheed introduced this model.

At its Marietta, Georgia facility, the company eventually built 203 aircraft. "With a busy touring schedule, these crafts were needed to transport the singer, his TCB band, backup groups, Col. Tom Parker and the ever-present Memphis Mafia to venues, concerts and appearances all around the country," the listing reads.

"Elvis kept several pilots on retainer that were ready to fly him to adoring fans at a moment’s notice." Elvis sold the jet a year after he bought it, and the aircraft ended up in a Saudi Arabian company. It was eventually moved to the International Air Center in New Mexico, where it was kept for decades.