Julia Roberts decided to pay tribute to her colleague George Clooney with her latest fashion release, and the unusual dress she wore had his photos painted on it. The Hollywood actress was a guest at the 45th annual Kennedy Center Honors in Washington, D.C., and her outfit was the center of attention during her red-carpet appearance.

Roberts wore a short black jacket and underneath it a long black Moschino dress covered with photos of George Clooney. Upon entering the ceremony, the 55-year-old actress changed into a simple black suit. George was among the awardees at the ceremony, and other colleagues such as Matt Damon showed their support.

Clooney and Roberts have worked together several times over the years, and their joint film "Ticket to Paradise" hit theaters in October. During his speech, Clooney said: “Growing up in a small town in Kentucky I could never have imagined that someday I'd be the one sitting in the balcony at the Kennedy Center Honours.

“To be mentioned in the same breath with the rest of these incredible artists is an honour. This is a genuinely exciting surprise for the whole Clooney family”. In addition to business cooperation, the duo has repeatedly emphasized over the years that they are good friends.

At the same event, Clooney appeared with his wife Amal, who was dazzled in a long silver dress covered in sequins. 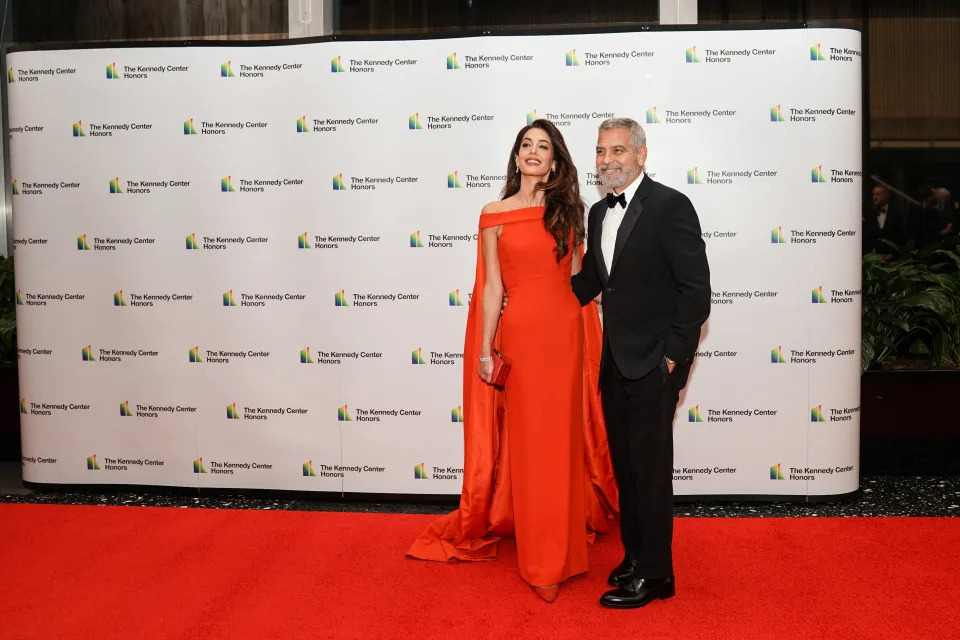 For the ceremony, George chose a black suit combined with a white shirt and a rainbow ribbon.

George and Julia on their friendship

"The minute we met, we had fun," Clooney told PEOPLE at the U.S.

premiere of their new film, Ticket to Paradise. "The beauty is when you work with people who take their work seriously and don't take themselves seriously, and that's really fun." As for Roberts, she seconded that sentiment.

"I thought, 'He's going to be a pal,'". "We met on Ocean's," Clooney told PEOPLE in 2015 of encountering Roberts for the first time. "We had actually never met before. People just thought we had." Added Roberts, "He and [director] Steven Soderbergh called me into a little meeting, I think to see if they liked me."