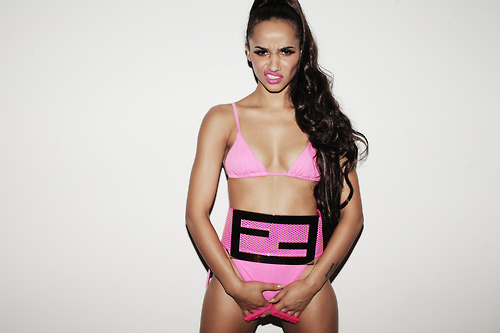 The sexy and sensual, Tanaya Henry is the owner of the upcoming jewelry company Laces by Tanaya and a professional model and an actor. Let us know some more about this intriguing beauty and badass person.

Tanaya and Trey were together as a couple but have separated. Trey is Tanaya’s only known boyfriend. The pair were very close friends for several years before getting comfy. The couple has separated after rumors confirm Trey cheating with another college who looks like Tanaya.

The couple is separated since and Trey even shared a snap in snapshot after the breakup.

Treys Snapchat after break up with Tanaya

Tanaya is a very successful model, an actress, and a jewelry designer. She owns Lace by Tanaya and through her popular friends has featured artists like Rihanna and Nicki Minaj in the company’s laces.

Tanaya is still growing in the fashion and modeling industry.

Tanaya has decorated her several body parts with tattoos, and they suit the skilly model from Minnesota. She has a cross sigh in back of her neck and also has a tattoo under her cleavage. She shows off her sexy body and inks modeling for her laces and other accessories and posts photos in her Instagram profile.

Tanya Posing for Lace by showing off her Tattoos

After moving to New York, Tanaya excelled in modeling and started signing deals with big business houses. She signed with Wilhelmina Models and modeled in campaigns of big companies like Apple, Sephora, Xbox, Target, Disney and Make Up For Ever. In 2010 Tanaya became a lot popular after appearing as a human billboard in her “She Wears Your Tee” campaign.

Soon after Henry started designing jewelry on her own. She made earring and necklaces by hand and called them “earlace”. She, worked as a dancer in nightclubs to fund her jewelry designing project. Her new workplace friends started to buy the jewelry from her. Soon after, the ear lace caught the attention of a stylist of Alicia Keys. The jewelry gained instant popularity since then, and Tanaya started her own company called Lace by Tanaya. Lace by Tanya has worked with some of the biggest celebrities present such as Beyonce, Kylie Jenner, Khloe Kardashian, Alicia Keys, Ashanti, Miley Cyrus and many others.

She moved to Los Angeles to pursue a career in commercial modeling and acting.

Tanaya Henry was born in Minneapolis, Minnesota on August 31, 1988. She is of Native-American (Sioux and Potawatomi tribe), African-American, Swedish and Russian descent. Her parents are Derick Anthony Henry and Tawnya Lynn Nelson. Derick is a former bodyguard and guarded top musicians and celebrities. He now owns a restaurant in Miami. Tanaya has two younger siblings, Gabrielle Henry and Katya Elise Henry.

Tanaya was a competitive cheerleader for five years and began to model at the age of 9. She worked with Target, a company based in Minnesota. In her teen years, Henry worked with local Minneapolis photographers. In 2006, Tanaya graduated from Prior Lake Senior High. She then attended Normandale college and studied computer programming. In the same year, at 19 years of age, she dropped out of college and moved to New York City. Henry pursued a career as a professional model in New York.