Home » Net Worth » Rosanna Pansino: Who is She Dating Now? Know Her Height, Net Worth, Age, YouTube, & More 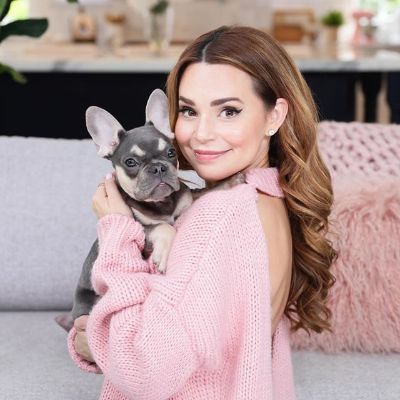 Social media is the easiest and only platform where anyone shows their hidden talent and variety of contents. Among them, Rosanna Pansino is one of the most famous YouTube personalities who has won millions of hearts through her baking recipes videos.

With rising fame, Pansino has accumulated a large number of followers on all over the social media and net worth as well. So, without delay, let’s us give some personal information, including her professional life. Check it out.

Who is Rosanna Pansino?

American YouTuber Rosanna Pansino was born on 8 June 1984, in Seattle, USA. She has a sister, Molly Pansino, who is also a social media influencer. However, she has not revealed the details regarding her parents and early life.

Though Rosanna has a passion for cooking, which she inspired by her grandmother, Rosanna is a skilled baker that led her to win the Shorty Award in the food category in 2013.

Rosanna Pansino never thought that she would be one of the famous social media celebrities. Rosanna created her self-titled channel after some of her YouTubers friends inspired her. Then she started making and uploading videos on her channel. She is getting more and more comfortable being in front of the camera.

After that, Rosanna started filming her baking show Nerdy Nummies, a tutorial on how to make a nerdy themed baked items. As a result, viewers love watching it and requested for more videos. As of 2019, Pansino has amassed over 2 billion views and has a whopping of 11 million subscribers on YouTube.

Not only that, but she also posts content like DIY, challenges, and much more. In her videos, Rosanna featured her parents and sister who worked as managers and filmed the videos for her.

On the other hand, YouTuber Rosanna Pansino pursued her career as an actress. Rosanna starred as Violet in the television series Broken Quest in 2013. Then she appeared as Miss Blissful in another TV series Emo Dad in 2016.

Moreover, she made a guest appearance in Disney’s series Bizaardvark as herself. Some other televisions credits are Parks and Recreation, CSI: Crime Scene Investigation as well as YouTuber Red’s Escape the Night as The Jet Setter.

Bethany Mota: Who Is She Dating Or Seeing Now? Know Her Age, Bio >>

In addition, Pansino made a cameo in the music video Dessert. Besides, she was a contestant on the VH1 reality show called Scream Queens  Season 2. Further, Pansino received three Streamy Awards nomination for Nerdy Nummies.

Aside from YouTube, Rosanna makes extra money from endorsement deals and even worked with brands such as  Home and Family TV, Wayfair, Wilton Enterprises, and so on.

James Charles: Is He Gay? Does He Have a Boyfriend? Know His Age, Net Worth, Merch, Wiki-Bio >>

Furthermore, Pansino has authored a cookbook entitled The Nerdy Nummies Cookbook that released on November 3, 2015. The book is divided into six chapters and has templates barcodes.

Recently, she published her new cookbook titled named Baking All Year Round, has many recipes for the entire year, including Spring and Easter.

Who is Rosanna Pansino’s Boyfriend?

The beautiful YouTube star has dated quite a handsome hunk in the past. However, Rosanna doesn’t talk much about her personal life to the media.

The 33-year-old actress is currently in a relationship with the YouTuber Mike Lamond aka Husky or HuskyStarcraft, who is a former e-sports commentator. As a matter of facts, Pansino along with her boyfriend runs her YouTube channel nerdy Nummies.

Rosanna and Husky first met through YouTube, and soon they turned their friendship into a relationship and began dating in 2013. Since then, the pair have been living together and loves each other’s company.

Although the couple is not married and doesn’t share any children yet but hopefully, we soon hear the wedding bells of this lovely duo.

Before Mike, Pansino was in a relationship with her co-star from the Glee, Josh Sussman. Even, they attended numerous red carpet and events together.

Back in 2016, in one of her Twitter, Rosanna stated that she had a boyfriend, but she didn’t reveal the name not even a single detail. Pansino posts may picture and videos of them on her social pages and YouTube as well.

It might be surprising for you when you heard her height. So how tall is Rosanna? The gorgeous, social media influencer height is only 4 feet 10 inches and weighs around 47 kg. However, her boyfriend’s height is 6 feet, 2 inches. Also, she posted a picture with her boyfriend mention their height on her Instagram.

Just found out in my first month back to YouTube my Husky channel grew more this month than any other month since I started the channel years ago. ?

You guys are INCREDIBLE. Can't wait to show you the next video (it's being edited right now!) pic.twitter.com/d1lVCvHttx