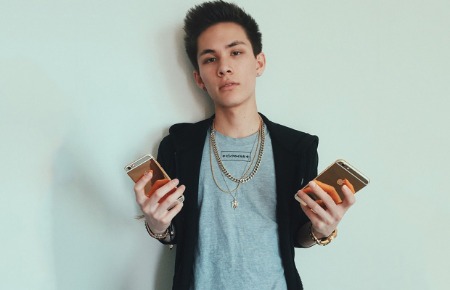 Carter Reynolds is a member of the group known as Magcon which is founded in September of 2013. Carter is a social media celebrity best known for his Vine videos.

The cute and handsome Carter has millions of fans on all over the social networking sites and pulls thousands of dollars through his videos. Controversies have always surrounded Reynolds. Carter lost millions of fans after leaking a private video of the two stars Maggie and him on the internet, and even many people tagged him as a rapist.

Let’s have a close look at Carter bio, age, salary, and so on.

How Old is Carter Reynolds?

Birth name; Carter  McCoy Reynolds was born to parents Jerimie Reynolds and Jeanie Reynolds on May 24, 1996, in North Carolina, United States of America. He has a sibling named Kealia. Reynolds holds an American nationality and is of Korean-American descent.

Moving towards his education, he studied at Jimmy C. Draughn High School in Valdese, North California. In addition, there is no detail of his further institution about the subjects in which he majored.

Career as a YouTuber

North Carolina-based Carter Reynolds shot to popularity alongside other Vine stars like Cameron Dallas, Shawn Mendes, and Nash Grier. Carter is one of the members of Magcon that stands for ‘Meet and Greet Convention’ and also toured across the USA together.

The group Magcon Boys was created by Bart Bordelon in 2013 and traveled to different cities around the USA to meet thousands of fans.

By 2014, Carter left the Magcon Family along with Hayes Grier, Nash Grier, and Cameron Dallas after two months, and he started The Carter Tour featuring other famous stars like Maggie Lindemann and Alyssa Shouse where they charged $75 for per VIP tickets.

Hayes Grier: Bio, Net Worth, Height, Dancing With The Stars

Moreover, he also collaborated with Vine stars like Matt Espinosa, Jack, and Lohanthy. Carter also has created a self-titled channel on  Aug 13, 2013, on which, he has over 776k subscribers with 10 million views.

After establishing himself as a social media star, eventually, he signs contracts with many big companies to promote different products. By 2014, he earns big bucks from companies that include Aeropostale, Coca-Cola, Audible and Airheads.

Additionally, the YouTubers was paid quite a handsome amount of income from the Magcon Tour. At the time, the tickets price ranged from $32 for the general ticket to $150 for VIP tickets.

Aaron Carpenter: Is He In a Relationship With Connar Franklin? Know More About Him.

However, Reynolds’ exact net worth and salary are still under review. According to Social Blade, the young star makes around $1 – $21 per month and yearly between $16 – $256 from his videos.

Who is Carter Reynolds’ Girlfriend?

Carter broke the heart of many his fans, especially girls when he officially announced that he is dating Instagram star  Demi Plaras. The couple is dating each other since 2017 and has been together for almost two years.

As of the current writing, there is no rumor of their breakup and enjoying each other company. Both Carter and Demi have followed on each social accounts and also, post their lovely pictures.

Recently, on May 20, 2019, Carter shared a photo with his girlfriend with a sweet caption. He wrote, “The only girl I want by my side, @demiplaras.”

Before Demi, the social media star was in a relationship with fellow YouTube star, Maggie Lindemann. They started dating in 2014 and eventually, break up.