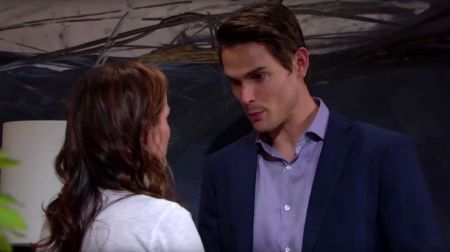 Adam is on the verge of doing something he might regret!  Hey there, Y&R fam! We have a hot new spoiler for you, and you may want to sit back and enjoy the drama that is about to ensue.

Young and Restless | Adam On The Prowl

We all know Adam is desperate for Chelsea, and after the little confrontation with Nick, we are pretty sure the rage is just a show. The question is, will Chelsea give in to the temptation?

When Chelsea and Nick meet, he lets her know what dirty scheme Adam is planning against them. He discloses that her ex sent Phyllis to seduce him, and he reveals why. Chelsea is utterly shocked that Adam would go such lengths, but considering he is her ex, she feels what happened is, in fact, the truth.

Later, we see Chelsea burst into Adam’s condo and demand explanation. What the hell does he think he’s doing? She is in a relationship with Nick, and nothing will ever change that. She goes on to say that her happiness is with Nick now and that he should stop interfering with what they have.

But Adam will not give heed. He isn’t staying down that easy. The drama, the heat, and the charm are going to blow the roof of this place. In the spoilers, we see Adam pouring his heart out for Chelsea. She is his love, one and only. Before their relationship bit the dust, everything they built went down the hill, it was just them; Chelsea and Adam (Chadam).

Young and Restless | Is Chadam Even Remotely Possible?

Moreover, Adam is ready to beg for another chance. He is going to do whatever it takes to get Chelsea back. Even now, his heart believes that Chelsea has feelings for him and that his desperate attempts may result in fruition. Nick isn’t whole enough to love the way he will love her. Regardless of all the physical action involved, Nick isn’t Chelsea’s ultimate destination.

It’s only a matter of time to what it holds for Adam. Will Chelsea give in to his brazen expression of affection? We must not forget Chelsea fell into his arms more than just once before. So what might go down? Find out in the next episode of Young and restless, airing only on CBS!