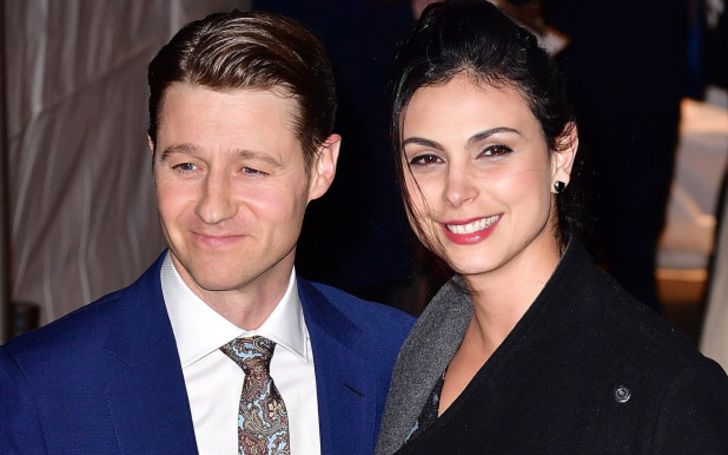 Ben McKenzie wife Morena Baccarin fell in love with the guy on the sets of “Gotham,” a series showcasing the criminal life in Gotham city. Two of them shared the stage as a couple and later on went on to be a real-life couple in 2017.

They got married on 2nd June 2017, which is also the birthday of Morena Baccarin.

Baccarin was born on 2nd June 1979. She played Dr. Leslie Thompkins in TV series “Gotham,” Vanessa in “Dead pool,” and Jessica Brody in “Homeland” for which she got Primetime Emmy Award nomination. In November 2011, Baccarin married to Austin Chick, an American film producer.

They had a son named Julius Chick, born on 22 October 2013. Austin Chick filed for divorce in July 2015, stating they had antagonistic differences. The divorce happened in March 2016.

After the separation, Baccarin announced the plan to get married to McKenzie, also revealing they are expecting a child.

Ben McKenzie was born on 12th September 1978. He is an American based actor who is well known for his role as Detective James Gordon in the TV series “Gotham,”. In addition as Ryan Attwood in TV series The OC.

McKenzie and Emily Van Camp rumored to be together before is marriage. She has played in TV series like; Everwood, Brother and Sisters, and Revenge and as Agent13 in MCU’s Captain America Series.

He was also rumored with Amanda Lancar and Shelley Hennig. McKenzie didn’t confirm any of these rumors. He started dating Baccarin and announced engagement in September 2015.

Ben McKenzie wife, Baccarin announced her pregnancy, she was in the phase of divorce with her the then-husband Austin Chick. Chick and Baccarin share a son Julius Chic, regarding his custody, there remained a huge ruckus. She also had pregnancy risk. The proceedings of Divorce was on hold.

But with such uncertainty and such harsh moments in her life, Morena still stated, “I’m right where I should be. All I think about is my son, my family and my future family”. She also said that she wouldn’t keep anything secret from her children and share every truth with them.

Austin Chick and Morena Baccarin share the custody of their son Julius. Chick believed Baccarin’s pregnancy should be when they were still together and working on their marriage. He blames Baccarin for cheating by such statements. But Morena Baccarin was planning of getting separated.

She sought out other relations. She didn’t think it was an act of guilty. But Chick said he supposedly had no idea that Morena and Ben were together.

They have been hooking up from the time they met on the sets of “Gotham” back in 2014. He felt cheated at that moment and decided to end the relationship.

After the divorce, Baccarin announced that she was pregnant with the child of McKenzie, and they are expecting their child very soon. On 2nd March 2016, they welcomed their daughter Frances Laiz Setta Schenkkan. Their marriage was on 2nd June 2016.

Ben and Morino are busy in their careers; they also recently canceled the visit to Comic-Con Paris due to the hectic shooting schedule, which left many Gotham fans heartbroken. Ben was busy in shooting schedule for “The Report.” He recently visited Japan for the promotion of “Gotham” with other costars of the series. Morena is enjoying her holidays celebrating Halloween.