An aspiring model blessed with a cute face and perfect skin tone, Eniko Parrish often lives under the shadow of Star husband, Kevin Hart. It’s such a shame that the promising model couldn’t explore her very best but will look to overturn her career after her delivery. The bold model is often seen posting pictures of the baby bump and never shies away for flaunting it. Before her pregnancy, the model used to take the internet by storm with her workout and beautiful photos.

Eniko Parrish was born in Baltimore, the US on 18th August 1984. According to wiki sources, she was born to Jamaican parents and possesses a unique skin tone. Also, she belongs to Afro-Jamaican and Asian ethnicity.

The model is a fitness freak and works incredibly hard in the gym due to which she has perfect curves to show off. Further, the model possesses American nationality. 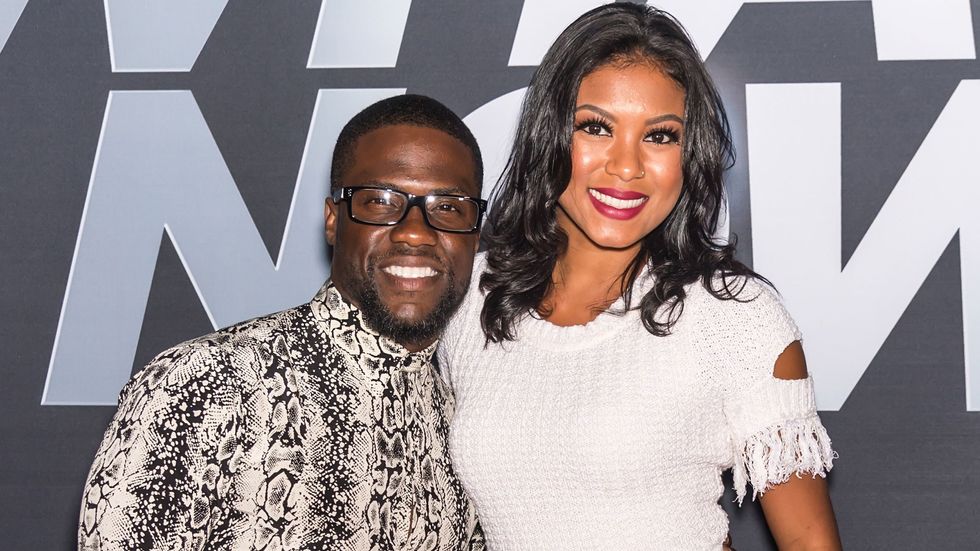 What Is She Doing For Living?

An inspiring model and actress, Eniko moved from Boston to Los Angeles to pursue her dream in a modeling career.

Parrish walked down to the ramp for BET’s in 2013 ‘Rip the Runway,’ which was a fashion and music hosted by Kelly Rowland and Boris Kodjoe.

She also played in some movie with her husband, Kevin. Eniko Parrish is a fashion icon. Also, she had a unique beauty and maintained figure and charming face with an adorable smile.

Her height is 1.71 meters that she is taller than Kevin Hart whose height is 1.63 meters. The couple is the evidence of love that the body measurement doesn’t matter in love life.

Eniko Parrish married with a long-term boyfriend, Kevin Hart in 2016 at a beautiful ceremony held in Santa Barbara, California and was attended by more than 200 guests in the wedding ceremony.

Eniko wore a custom-made mermaid gown by Vera wang accomplished by Sophia Webster. She looks stunning on that wedding dress on her wedding day.

Eniko Parrish shares the photo of the newborn son on Saturday and takes the snap, held on her arm through Kenzo’s face was kept hidden.

A love like no other! 💙 Every ounce of pain was worth it ALL..Would I do it again? ABSOLUTELY!

Eniko posted a five old days son on the Instagram:

You are a little miracle ✨ Our beautiful baby boy. 💙 We pray you'll feel so safe and loved Surrounded by our joy. For we are blessed to hold you close And feel your beating heart. The little life we hoped for How wonderful you are. We raise our hearts with praise and thanks For you our little gift. May God's peace surround you As you wake and as you sleep. And may you grow to live and love And play your little part. In this world may your light shine And never be put out. #HappySunday🙏🏽 #Happy5DaysOld👑 #BabyZo 👼🏽

The Jumanji actor Kevin Hart appeared on Power 105.1 Radio’s The Breakfast Club on Thursday and admitted that he was cheating on his wife, Eniko Parrish.

“There’s no way around it. The best way to do it is addressing it right on. You gotta f*cking just say exactly what it is. That’s Kevin Hart in his dumbest moment. That’s not the finest hour of my life,”

Hart said, on the radio The Breakfast Club.

“With that being said, you make your bed; you lay in it.”

Later in September, the unidentified person exposed the tape of Hart with another woman also claimed to have “sexually provocative.” Kevin was threatened if he refused to pay then that video will be telecast on the social media.

Before the news marks as a headline, Hart explains in his social media saying that someone was trying to make “financial gain” off his past mistake.

However, Hart apologized to his wife and kids in the Instagram video.

Sending so many apologies to my wife & kids. I gotta do better and I will. I'm not perfect and have never claimed to be …I love you all.

Later Kevin’s wife accepted his apology also he said that he wants to go home and fix his marriage.

Eniko is active Twitter and Instagram and has lots of fans followers on the social account. Additionally, Eniko loves the children and dogs and spends her free with Heavens and Hendrix and hobbies of listening music.

Moreover, Parrish keeps posting a picture of children and dogs on Instagram. The rising model aims to achieve more and more success in the future.

Furthermore, she has an attractive body physique of 35-28-36 inches with light brown eye color and black hair. Moreover, she has kept her figure well-maintained & well-sculpted despite giving birth to a baby boy.

However, her measurements of her impressive figure are Breast-35inch, Waist-27 inch, Hip-35 inch.

Eniko Parrish Salary And Net Worth

While there is no information about her salary and net worth has not officially revealed as of yet.

But, Kevin Hart is one of the best-paid comedians in the world and, has a net worth in the region of $57 million, as of 2019.