Home » Celebrities » Selena Gomez And Bill Murray Are Getting Married?

Selena Gomez And Bill Murray Are Getting Married? 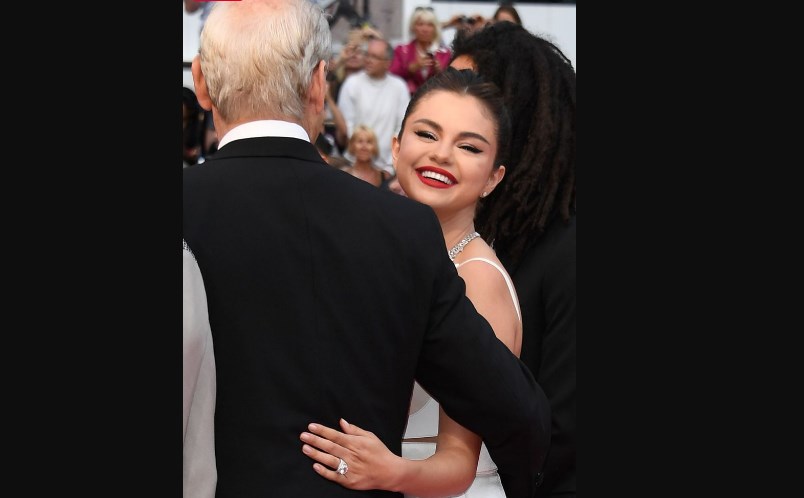 Selenators, you will be stunned when you hear your favorite singer and former Instagram Queen announced on the 2019 Cannes that she is getting married, but you will never guess to whom. Selena Gomez attended the 72nd Cannes Film Festival to promote her movie with her co-star Dead Don’t Die.

Selena Gomez and Bill Murray Are Getting Married

The 26-year-old singer headed from home to Cannes for the first time and obviously, she had documented the experience. Selena entered on the red with Bill Murray putting hand-on-hand like a couple at the 72nd Cannes Film Festival and spin-off everyone’s head.

She took Instagram to speak about her experience and posted a picture with her co-stars of Dead Don’t Die along with director Jim Jarmusch in France and captioned it,

“My first time in Cannes! I’m so honored to have been a part of this movie with Jim and the whole cast.”

Hold on! It’s not ending here. She added,

“By the way Bill Murray and I are getting married.”

Selena had a blast hanging out with Bill, who is 42 years senior to her. At the event, the actress looked stunning in a two-piece dress designed by  Louis Vuitton and completed her look with classic dramatic cat eye/red lip combo and a chic updo.

On the red carpet, Bill whispered into Selena Gomez’s ears that moment was captured by the camera which went viral on social media and everybody was curious to know what he told at the 2019 Cannes? Well, we are still unaware of their conversation.

However, fans noted that she was teasing them with the caption.

Moreover, we heard that the 68-year-old actor is also impressed with Gomez. Murray gushed to Vanity Fair that he doesn’t remember what he said instead he was just trying to keep her at ease, he likes her.

“She’s unusually bright. She’s kind and she’s natural. I’m always pleased to find some kind of pop icon who I really like.”

Take a look at the adorable pictures she posted on Instagram,

So are Selena and Bill Hollywood’s newest celeb couple? What do you think? Many of her fans believed that they could be a perfect match?

The Disney star has turned superstar singer and actress in the Hollywood industry and also, has had a lot going on her life which you don’t know. Here we are going to talk about her dating affairs? So who were the lucky guys she dated in her past?

In late 2018, Gomez broke up with Canadian singer, The Weeknd. After a few months of their dating, the couple split up but what the reason behind it?

The first time, she and The Weeknd were spotted kissing in Santa Monica. At the time, the Canadian singer had just broken up with Bella Hadid.

Then they were seen together again in Los Angels and eventually traveled to Italy together. Also, they attended the Met Gala together. However, the duo hasn’t revealed anything relating to their separation.

When Selena went on to date with rumored teen Caleb Stevens in the mid-2018. Though the pair has been spotted together along with their pals in Los Angeles.

According to the insider, Selena and Caleb were just good friends. Besides, there was not anything between them like lovers and claimed that they are not dating.

The most popular teen couple, Selena and Justin were known as Jelena and made a place in millions of fans’ heart. Gomez and Bieber have an on and off relationship from 2010. But sadly, the two ended their love in 2018.

Jelena attended the Vanity Fair Oscars party together for the first time in 2011. In the earlier, her ex, Justin moved on with model Hailey Baldwin and got married in early 2019.

Back in October 2016, the rumored swirled that Gomez and Puth were getting closer. The duo also worked together on hit duet We Don’t Talk Anymore. During the time, neither Selena nor Charlie admitted they were dating each other.

But in an interview with Billboard, Charlie confirmed that he has flung with her. He added it was very short-lived, very small by very impactful. He tried his best but he wasn’t the only person on her mind. So when he found out, he ended. Even their fans noticed that Charlie had unfollowed Gomez on Instagram.

As per sources, Selena Gomez and Samuel Krost were rumored to date in 2016 for a few months. She was introduced to Krost through their mutual friend, Gigi Hadid. According to US Weekly, they were seen together on dates — at Cipriani in Manhattan and hanging out at the SLS Hotel in Beverly Hills, California.

However, in April 2019, Samuel was rumored to dating the model Gig Hadid after the two were photographed very closed. Later, it was reported that she was single and not dating any guy.

Selena was featured on Zedd‘s song I Want You To Know. The DJ and the pop star fueled romance rumors in 2015. She stated in a radio interview that she had had a thin with Zedd, real name is Anton Zaslavski and that was nice.

When Diplo asked her a question about their relationship, she admitted that the two were romantically involved.

The romance between Selena and Niall Horan, a former member of One Direction are rumored to be dating again in April 2019, according to Hollywoodlife, the duo was spotted together at the MTV VMA in 2013 and eventually dated.

Additionally, they were also seen together at Jenna Dewan‘s 35th birthday party. Fans speculated that they were in a relationship and then appeared in X Factor Finale in December 2015 in London.

The singer dated the Jonas Brothers’ member, Nick Jonas for a few months back in 2008 after he broke up with Miley Cyrus. But recently, Gomez trolled ex-boyfriend, Nick Jonas by reminding him about their date to Central Park because of his behavior.

Selena Gomez and Taylor Lautner got pretty cozy for a while, with Gomez spotted shopping with Lautner’s younger sister. The two met up when they were both in Vancouver. Taylor was filming New Moon and Selena was filming Ramona and Beezus. However, the pressure of the media became too much for them, causing them to split up.