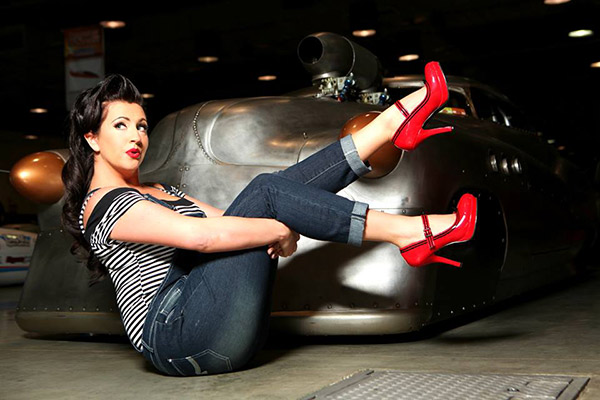 Valarie Gillies is as efficient as glorious she looks. Apart from being beautiful, she is a very good manager of Dave Kindig, an American Hot Rod designer and owner of custom car restoration, Kindig-it.

Kindig-it is a car designing and modifying company located in Salt Lake City, USA. Valarie Gillies looks after all the office works of Kindig-it while Dave, the owner is busy designing the cars. So let’s look closely at the life of this amazing woman, Valarie Gillies.

Valarie Gillies, also known as Vintage Valarie was born in Utah of Salt Lake City. She has been associated with Kindig-it for last 16 years.

Is Valarie Gillies married? Who is her Secret Boyfriend?

Valarie Gillies is a perfect woman. She is an excellent manager and also super gorgeous. Anyone could be lucky to have her as a partner but seems like she has already found her catch. Yes, you heard it right. Rumors circled around that Gillies was in a romantic relationship with Chris Zerull, a freelance photographer from the Salt Lake City of Utah.

It was found that Zerull has made their relationship official in Facebook account. However, Gillies hasn’t uttered a word about the relationship or called it official.

Gillies works as an Office Manager in Kindig-it. Kindig-it was founded was Dave Kindig along with his wife Charity Kindig 18 years ago.

Valarie began her career in Kindig-it over 16 years ago and since then she has been a huge part of the company.

Valarie is responsible for the inner working and fine-tuning of Kindig-it Design – everything from the collection, customer relations, and managing client builds to keeping the fellas, including Dave Kindig, in the right direction.

Valarie Gillies is known as Vintage Valarie on her social media accounts. She updates her accounts time and again to remain connected with her fans and well-wishers.

Valarie has a vibrant personality that matches her love to shoot “Pin-up.” Her laugh is completely infectious, and she’s maintained a great relationship with all of the Kindig-it Designs customers of over a decade.

Well, it seems like Gillies is a nice and hardworking person overall.