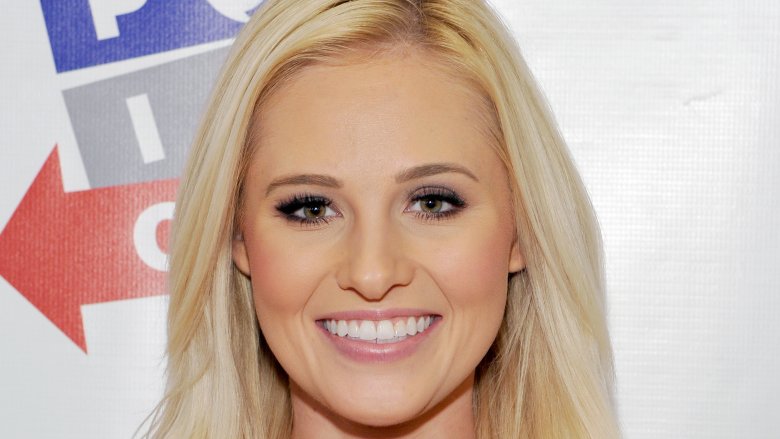 Tomi Lahren is an American conservative political commentator and a former television host. Tomi was suspended from the former boss of The Blaze, Gleen Beck in March after an interview on The View saying that she believed women should have legal access to abortion. She joined Fox News as a contributor in August 2017.

Tomi Lahren has an estimated net worth of $3 million in 2018.

Tomi is a young lady and has an impressive body figure who has been active in the television for two years. Lahren earned monthly $16,000 while she was working with The Blaze. However, her OANN monthly has never been revealed.

In 2010, she has featured in a Rapid City Journal story about teenagers searching for their first jobs.

Tomi loves being in front of the camera since childhood. After graduation, she applied for an internship at the One America News Network and obtained an interview. Lahren impressed the interviewers, and she was offered to host her show by OANN. She immediately said yes and packed her bag and moved to San Diego, California and started­ hosting on her own show “On Point with Tomi Lahren” which debuted in August 2014. Her commentary on the 2015 Chattanooga hooting quickly garnered the public attention.

In August 2015, Lahren tweeted that she had completed her last show with OANN.

I’ve completed my last show at OANN, and I am profoundly grateful for their support over the last year. Something new is coming…#TeamTomi

Later she moved to Texas and began a new show with The Blaze. Lahren became known for her show with a three-minute segment called “final thoughts.” In early 2016, Tomi endorsed for president in the Republican Party presidential primary. In November 2016, Tomi appeared on The Daily Show with Trevor Noah for a 26-minute interview.

In May 2017, she began working at Great America Alliance and in the same year, she worked as a contributor on Fox News.

In 2017, The Blaze’s owner, Gleen Beck fired Lahren without cause after supporting abortion rights on ABC’s ‘The View.’ She was suspended in April and filed a wrongful termination lawsuit.

The lawsuit file in Dallas County Court, Tomi said that’s her firing was motivated by an unlawful animus and specific intent to inflate Beck’profile, from what has become a mediocre following at her expense and also said her contract stated, she can be only fired for the cause. Lahren tweeted about her legal action saying, “Lay down and play dead really isn’t my style.”

Lay down and play dead really isn't my style. #FinalThoughts

The lawsuit was settled under an agreement with the former boss, Beck that she kept her Facebook page but she has to remove all the videos that she had made with Glenn.

Tomi dated a military officer, Jerad Christian who is from Utah. The couple met in February 2015 at the Naval Amphibious Base Coronado in San Diego. Tomi told to Daily Mail; she was so proud that he’s fighting for America. The couple dated for a short period and split up.

Jerad is the one who inspired her to blast President Barack Obama’s efforts in the fight against terrorism. Tomi Lahren called out Obama’s administration for their half-way. Half-baked, tip-toe. Be-friendly-to-to-Jihadis mentality in a passionate speech.

Then she dated Chase McNary in 2016. Chase McNary is the second runner-up on The Bachelorette. The couple began dating in second-half of 2016. They were spotted together at iHeartRadio Festival in Las Vegas. But their relationship did not last long.

Tomi Lahren was born on 11 August 1992 in Rapid City, South Dakota. Tomi was born into a military family and is of German and Norwegian descent.

Tomi attended Central High School and graduated from the University of Nevada, Las Vegas in 2014 with a Bachelor of Arts in broadcast journalism and political science.

Lahren was quite active in college. She was an associate producer for The Scramble, a political roundtable show for her university’s television program, and interned for Republican congresswoman, Kristi Noem, becoming the first intern for Noem’s Rapid City office.

Beautiful and vibrant, Tomi is 26 years old. She has 5 feet 5 inches tall and body weight is 55 kg. Her body measurement is 32-25-34. She is a fashionable Correspondent who is living a sophisticated lifestyle. She spends her free time with her family and friends. She is fond of Dogs and very often she posts the picture of her with a different breed of dogs.