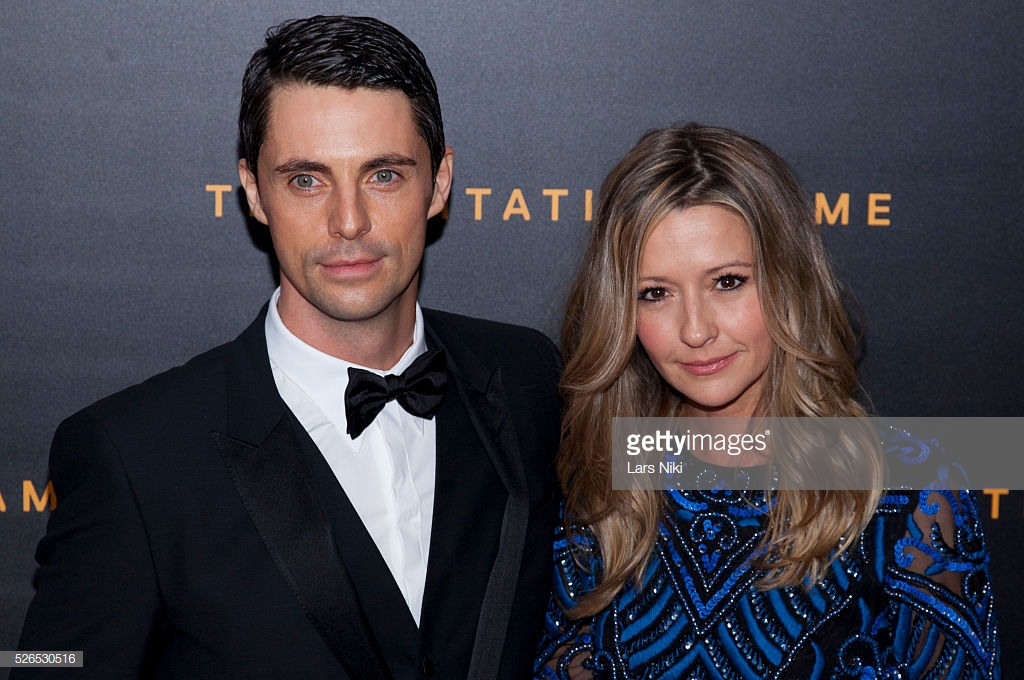 Sophie Dymoke is popularly known as the wife of British actor, Matthew Goode. Matthew is famous for his role as Henry Talbot in the series ‘Downton Abbey.’ Sophie married to Matthew Goode in 2014 and is the mother of three children.

Sophie Dymoke came to spotlight after she began dating the British actor, Matthew Goode in 2007. The duo hadn’t disclosed much about their relationship especially, how and when they met for the first time.

According to GettyImages, Sophie, and husband, Mathew first spotted together at the Tribeca Grand Hotel in Manhattan while he was filming ‘Match Point’ on December 15, 2005. Since then the couple is together to date. The couple never revealed about their private life to the media. Sophie and Dymoke also had attended several movies parties and the red carpets together. Sophie is very supportive of Goode’s acting career.

Back in February 2010, Sophie and Matthew attended BAFTA Soho House Grey Goose at the Grosvenor House Hotel in London where she made her appearance in a white shiny gown and Matthew was wearing a black tuxedo. The duo also attended “The Imitation Game” premiere on 9 September 2014 at Princess of Wales Theatre in Toronto, Canada.

Furthermore, the pair was together on the EE British Academy Film Awards which held at The Royal Opera House in London on 8 February 2015.

After dating for several years, the couple got married in 2014. Sophie and her husband never revealed about their wedding including the venue and guest.  In an interview with Hitflix, Matthew opened that they got married in 2014. There are no rumors of their extramarital affairs or divorce. They both are loyal to each other and have been together for over a decade.

Even before marriage, the couple was living in an open relationship. They have three children together. Sophie and her husband welcomed their first baby in March 2009. It was a baby girl, and they named her Matilda Eve Goode. She became a mother for the second time in after four years of having her first child. She gave birth to an another beautiful daughter, Teddie Eleanor Rose Goode in 2013.

After a year of marriage, Sophie gave birth to their third child in 2015. This time it was a son, Ralph Goode. Sophie and Matthew have sighted only their eldest daughter, and the other two kids are kept away from the cameras .

Talking about her net worth, Sophie is a fashion designer and designed several costumes for then boyfriend and now husband, Matthew. Sophie has worked for several companies including Vince and Mih Jeans. She also worked for Diesel as a sales manager for a year and as Head of Sales at Alice+Olive for two years.

Nowadays, she is working at Mih Jeans as a designer. Sophie is more focused on her children and family than her career. Becoming a celebrity wife, she is not active on any social media, not even on Facebook.

Sophie Dymoke net worth is not revealed yet. Mostly, she accumulated an impressive amount of money through her profession. However, her husband, Matthew Goode has a net worth of $3 million, as of 2018. Currently, she is living a lavish lifestyle with her husband and kids.

Sophie Dymoke neither a celebrity nor from the wealthy family. Her birth of date and parents’ details are not available in any social media. As we know, she was born in England and belongs to white ethnicity. Sophie studied at Sacred Heart School and graduated from the University of Wales, Swansea. Then Dymoke worked in the fashion industry as a designer.

In an interview with independent.co.uk in February 2013, Matthew stated,

“She used to work in fashion, and help us out (Financially), recently she went back to working for MiH Jeans.”

Sophie’s age is unknown however the gorgeous lady has well maintained her body figure. There is no complete details of her height, weight, and body measurement. She has beautiful black eyes and has blonde hair.