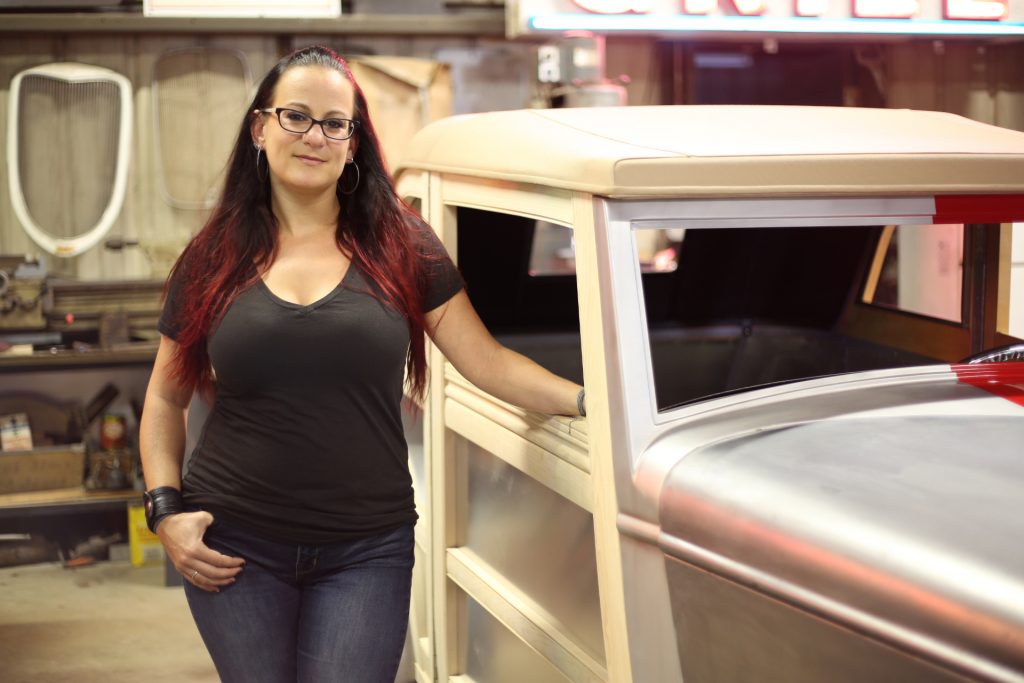 Sarah “Bogi” Lateiner is an ASE certified Master Technician, American television celebrity, poet, and an artist. Bogi is best known as a TV host of Velocity Network’s TV show “All Girls Garage.” It is the show which has proven that repairing cars and motorcycles is not limited up to men only.

Sarah is popular by her nickname “Bogi” alongside Cristy Lee, and Rachel De Barros, three women team of “All Girls Garage.” She is also the owner of 180 Degrees Automotive and recognized as a supporter of arts by educating people about its importance.

Let’s take a detailed look on wiki-bio of Sarah “Bogi” Lateiner now and learn how did she get a passion for the cars as well as what is the meaning of her nickname “Bogi.”

Bogi is born as Sarah Lateiner on 15 December 1977 in Flushing, Queens. Bogi had spent most of her childhood with her only sister Jenny in a small town called Montclair in North Jersey. Moreover, she had grown up in a middle-class family, and her parents struggled to ensure that both of their daughters never lacked anything.

Sarah’s parents wanted to make her a lawyer. Therefore, at first, she went to Oberlin College to get a degree in Pre-Law and Women’s Studies. After graduation, Sarah also had thought to join Harvard Law School and became a lawyer. However, her passion for vehicles never got out of mind, and she decided to attend Universal Technical Institute in Phoenix and graduate as a mechanic from there.

Her Career and Achievements

Bogi graduated in mechanic but being a woman in this field; it was hard to find a job. After several attempts of job seeking, she had landed at BMW STEP program and worked there as a dealer technician for six years. Then, she ventured into a personal business where she did remarkably well.

While she is working BMW STEP program as a technician, she had felt that she was missing customer interaction and got the vision for an auto shop. Then, Bogi started 180 Degrees Automobiles in 2006. Similarly, in 2012 she becomes part of the TV show “All Girls Garage,” which is a great breakthrough in her career.

Talking about her achievement, Bogi has won Female Service Shop Owner of the Year in 2014 and has also won WP Carey School of Business-Impact Award.

How did Bogi get a passion for a cars

Bogi’s passion for cars started at the age of sixteen, ever since she bought her first car an old VW Bug. That car needed lots of things to repair, and she had a terrible experience repairing it at the auto shops. Therefore, she decided to take that car in her high school’s auto shop where she had restored her beloved first car completely.

How Sarah got her nickname “Bogi”

If you are thinking about how she got her nickname “Bogi,” then we also have an answer for you. During her study, she got the chance to become part of a student exchange program that let her resides in Hungary. There, Sarah’s friends gave her the nickname “Bogi” which means “Leader” in Hungarian.

Is Sarah AKA Bogi is still Single or Married

The gorgeous TV host is still single even at the age of 41 as of 2018. It may look strange to many of her fans, but it’s true that Sarah neither yet married and nor dating anyone. Similarly, she is a straight woman and does not have any lesbian relationship with anyone.

The reason behind her single status is the busy work schedule as she spent most of the time in traveling. Therefore, we can say that she is enjoying her life as a world-class car mechanic now. However, sooner or later Sarah will definitely meet her Mr. Right someday.

Her hobbies and personal interest

In her free time, Sarah “Bogi” Lateiner likes writing, traveling, enjoying the arts and supporting the community of artists. Exploring Arizona with her bike, enjoying great food and spending quality time with her friends are some of her other hobbies.

<check out my story for more from this event!> Thrilled to have been able to come out and support some of my amazing #cargirltribe friends with their mission to educate and empower by bringing classes in automotive basics to women around the country. This is their 4th event and it’s so cool to see all these ladies welding, getting a tour under the hood of their car, and learning all about brakes. Make sure you follow #womanandmachine to find out about events coming to a city near you in 2019! #knowledgeispower #cargirls #learneveryday #passthetorch #carcareclasses #womenempoweringwomen #femalemechanic #womenwhowrench #womenwhoweld

Bogi isn’t only passionate for cars but also wants to transfer her passion to more and more woman in the world. So, she also teaches people, especially women, about vehicles in monthly car care classes as well as gives training in her automotive shop.

“All Girl Garage” star Sarah “Bogi” Lateiner had a successful TV career and earned much money from the show. However, her salary for the show is not revealed yet. Bogi has also earned attractive money from 180 Degrees Automotive. Similarly, she has also made extra cash from others ventures.

She has she earned $1 million by fixing cars in a driveway for two years. Similarly, in 2011, her business made another $1 million in sales. As of 2018, Bogi accumulated a net worth of $5 million. There’s no doubt that in the upcoming year she will increase more net worth.