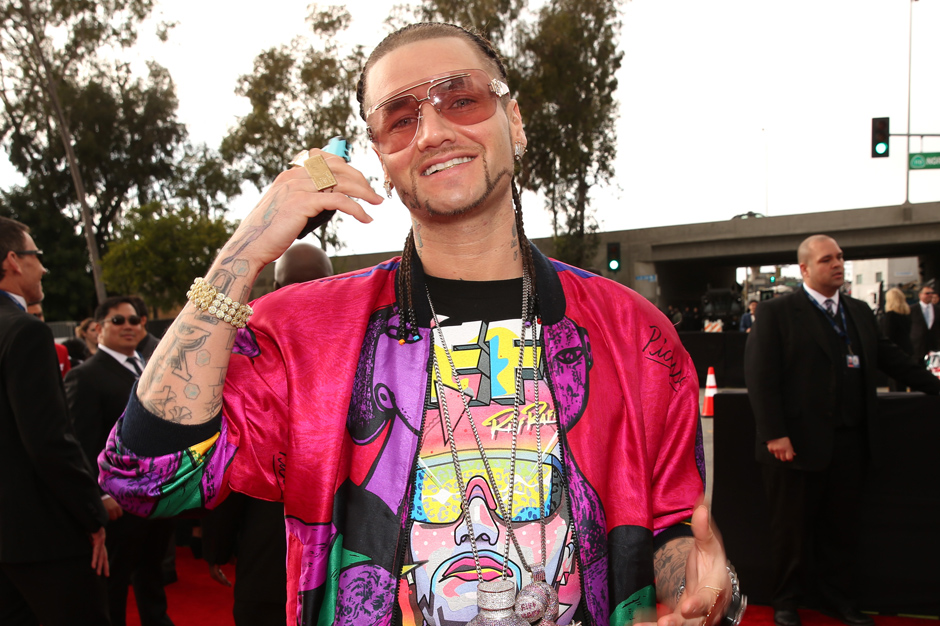 Riff Raff is an American rapper. He is the co-founder of OG Ron C and has been associated with rapper and producer Soulja Boy’s S.O.D. Money Gang Inc. He was a member of Three Loco. Riff Raff has a number of tattoos including logos of MTV, NBA, and his name on his fingers.

The rapper earns a tremendous amount of money through his music albums and concerts. Further, he receives extra wealth from an endorsement deal.

Riff Raff moved to LA and began rapping and participated in the rap battle. Then he began making CDs of his rap over other artists’ beats. Riff Raff released his tracks via social media such as YouTube, My Space, and WorldStarHipHop using the name ‘MTVRiff Raff.’

He also gave auditions in many shows. In 2009, he flew to Anata to audition for MTV’s reality show ‘From G’s to Gent’s’ but he was eliminated on the second episode of that season. In the year 2009, he finally got a call from Simon Rex who is a rapper and comedian. Simon and Riff Raff along with Andy Milonakis formed a group named ‘Three Loco.’

In mid-2011, Raff was signed by Soulja Boy and began making music videos and his two singles, Jose Canseco and Marc Jacobs gained massive fame on the internet. In mid-2012, he signed a deal with Diplo’s label Mad Decent and released mixtapes such as Birth of an Icon, Summer od Surf and an independent album, “The Golden Alien”. His mixtape ‘Birth of an Icon’ received the honor of Mixtape of the Week by Stereogum.

In April 2016, Riff Raff partnered with Stampede Management and BMG and raised 4 million dollars for his Neon Nation Corporation to invest in music and movies. However, the partnership broke up due to mismanagement.

Riff Raff is an actor and a reality star. He starred as Double Cup on FXX’s Major Lazer. He competed on the MTV reality series ‘The Challenge: Camps vs. stars’ in November 2017. He also played a minor role as Jamie Franko in the movie ‘One Life to Live.’ Moreover, he has appeared in many reality TV series like ‘Wild n Out’ and ‘From G’s to Gents’.

Riff Raff was arrested in Greensboro, North Carolina when the cops found drugs in his vehicle on 11 August, 2013. He was imprisoned along with another two-person and was released without bail after some hours.

On 31st May 2018, Riff Raff canceled his tour to Australia and New Zealand after an Australian woman accused him of drugging and raping her backstage of a concert five years ago.

Johnny Dang & Co created Riff Raff ‘s dark diamond Street Shark grill teeth. Riff Raff’s grill teeth appears to be full top and bottom which look like a billionaire conehead. He told to Complex, “Nobody got this.” He added, “The Best grill that anybody ever had.”

He tweeted, “MY TOOTH iS SHARP I OFTEN GET MiSTAKEN FOR A GLOW iN THE DARK SHARK” in 2013.

Riff Raff has several tattoos on his body. He had tattooed MTV on his right side of neck before he auditioned for the MTV reality series ‘From G’s to Gents.’ He also has BET tattoo on his right shoulder, but later he covered up with a tattoo of his dog, Jody Husky.

Horst Christian Simco was born on January 29, 1982, to Anita Isaacs and Ronald Sico in Houston, Texas, USA. His father was a Vietnam War veteran who served as a police officer and worked as a manager at Walmart, and his mother was a maid. Horst raised along with his four siblings in a shady neighborhood in Copperfield.

As a child, he played basketball with his friends and was known as the best basketball player in high school. He attended Langham Creek High School where he was a shooting guard of the basketball team and he was almost sure about making his career in sport. By the time, his family moved to Stone Creek. However, he dropped out in the senior year.

After his parents divorced, his father was diagnosed with tonsil cancer and later moved to Duluth, Minnesota for his father’s treatment. In 2001, he joined at Hibbing Community College in Hibbing, Minnesota, and majored in liberal arts. He dropped out of college in 2003 and moved back to hometown and did some odd jobs and eventually relocated to Los Angeles.