Rachael Leigh Cook: Split Up From The Originals Star, Daniel Gillies After 15 years of Marriage. 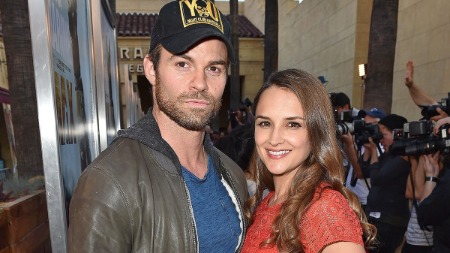 Have you ever been feeling stuck in a relationship? Are things not moving fast enough?

Likewise, American actress, Rachael Leigh Cook feels the same, so she and her husband Daniel decided to end their 19 years of togetherness and 15 years of marriage that announced through social media on June 13, 2019.

So what made Rachael and Daniel end their romance? Is she dating someone? Let’s have a close look at her personal and professional life.

After 15 years of marriage, the She’s All That actress Rachael Leigh Cook and The Originals star Daniel Gillies have decided to separate.

So it comes as a shock for the fans after being together for so many years, Rachael Leigh Cook, 39, and Daniel Gillies, 43, have decided to end their marriage. The couple shared the news via an Instagram page on June 13, 2019, and captioned it with a read heart emoji and seems they are still in love but failed to work out their marriage.

Let’s discuss how their love story began and what the reason behind their separation. Rachael Leigh Cook started dating in 2001. Three years later, the duo took their relationship into the level and officially became husband and wife in 2004.

Camille Guaty: Who Is Her Husband? Know Her Net Worth, Age, Career, IMDB, Bio

Rachael and Daniel have two adorable kids:  daughter Charlotte,5, and son Theodore, 4. Even she shares the cute pictures of her children on her social profiles with a lovely caption. Despite the busy schedule, Cook manages the time for her children and also, went to trip or vacation in different places and countries.

Rachel rose to stardom in the classic 1999 teen comedy She’ All That. Since then Rachael remained working as an actress with different roles on the TV series as Psych and Perception.

Prior that, she first appeared in a public service announcement for foster care at the age of seven. Afterward, Cook began working as a child print model for Target as well as featured on the boxes of Milk-Boe dog biscuits.

Rachael landed her first role as Mary Anne Spier in 1995 comedy drama The Baby-Sitters Clube at the age of sixteen. Besides, she starred in many television films such as Country Justice, Stealing Paradise, Left to Die, Summer Love, Summer in the Vineyard, Frozen in Love, Valentine in the Vineyard and more.

Aside from TV series, Rachael Leigh Cook made her debut on the big screen as well. Rachael portrayed Laney Boggs along with Freddie Prinze Jr. in the teen romantic comedy film She’s All That that became hit at the box office in the late 1990s.

Some of her notable films include Josie and the Pussycats, Nancy Drew, A Midsummer Night’s Dream and also, appeared in numerous direct-to-DVD like American Crime, All Hat, Falling Up, Vampire, The Family Tree, and Red Sky.

She’s All That actress earns her most of her wealth from her acting career as well as a producer, voice artist, and model. Cook owned a production company named Ben’s Sister Production. Rachael Leigh Cook net worth is believed to be approximately $5 million.

Apart from that, she has had a voice role in the animated WB series Batman Beyond and also, in the animated movie Batman Beyond: Return of the Joker. Furthermore, she provided the voice for video games such as Kingdom Hearts II, Dirge of Cerberus: Final Fantasy VII, and Yakuza.

Rachel Leigh Cook was born on October 4, 1979, in Minneapolis, Minnesota, U.S.A to Joann Thomas H. Cook. Rachael’s mother was a cooking instructor, and father was a social worker. She raised along with her brother Ben Cook.

Concerning about her educational background, Rachael studied at  Clara Barton Open School, Laurel Springs School, and Minneapolis South High School. However, the details about her college and university are not known.

Being a celebrity, Rachael has to keep updating about her latest work on social profiles where her well-wishers and fans could know about her. She is active on social networking sites such as Twitter, Facebook, Instagram.

On Instagram, Cook has above 185k fan followers in which she posts photos of herself and her kids as well. After Rachael split with her husband, she stopped sharing pictures of them on social accounts. Also, Cook last appeared on former husband’s Daniel Instagram account on January 3, 2019, in which she was reading an old school recipe book about casseroles.

Not only that but the actress also shared a photo with Daniel carrying a small dog on July 20, 2018, which was taken in 2010.