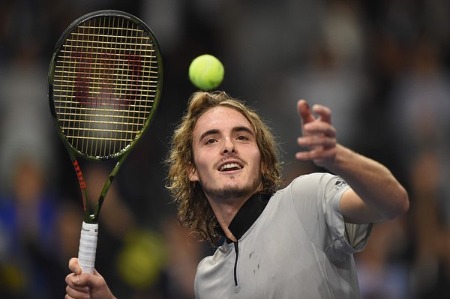 The person who never fails, have learned nothing in their life. Have you ever heard or meet someone who had worked out for what they want with zero struggle? No, you haven’t. The professional Greek tennis player Stefanos Tsitsipas has won three ATP singles titles and also reached seven finals. He is the youngest and highest-ranked player in Greek history.

Stefanos stated, Tennis has taught him discipline, behavior, respect, self-awareness, and decision-making in his early teen. He continued, “Tennis is my life.”

Let’s have a close look at Stefanos’s bio-wiki, profession, age, net worth, and salary.

Stefanos Tsitsipas was born in Athens, Greece, on August 12, 1998, to a Greek father from Karditsa, Greece and a Russian mother from Moscow. His parents were the first people to introduce him to tennis. His father was a well-trained tennis coach.

He is the fourth child of his parents and lived in a touristic suburb south of Athens in Vouliagmeni which named after Lake Vouliagmeni.

How tall is Stefanos Tsitsipas?

Tennis player Stefanos has learned a lot of things in his career. It allows him to experiment with new things, places, and peoples.

As a matter of fact, Stefanos turned his childhood hobbies into his profession, and that was incredible. Stefanos has maintained his physique and stands 6 ft 4 in (1.93).

Getting started Tennis at a Young Age

Greek tennis player, Stefanos Tsitsipas began playing tennis at the Tennis Club Glifada at the age of six. His coach Giorgos Spiliopoulos taught him the importance of sport and right technique on the court while playing tennis.

When Stefanos was eight years old, he moved to Giorgos, the person who taught about the game, technique as a junior player. Since then, Tsitsipas everything changed and gained lost of knowledge.

Greek Player Stefanos Tsitsipas took the most important decision for his future at the age of 12 that he wanted to be a tennis player. At the time, Stefanos was ready to sacrifice his life in Greece to begin traveling for tennis around the world.

For this long journey, Stefanos went through stress, frustration, and anxiety, but his biggest challenge was to play against another team.

Stefanos was a former junior tennis player who began playing with the ITF junior circuit in 2013 at the age of 14. The next year, Stefanos reached the final of Orange Bowl and overall ranked at No. 14 at the end of the season.

Again, in 2015, the tennis player reached the final of Orange Bowl but failed to win the titled and then returned to his hometown. So, to become a pro player, he went to Mouratoglou Tennis Academy in France where he started training.

In 2016, Stefanos got a big chance, which became a turning point in his career. The same year, Tsitsipas won his first Grade A at Trofeo Bonfiglio in Milan, Italy.

Wearing the wings of his success, Stefanos became the third Greek player and first Greek male in the Opera Era to win the Junior Grand Slam title. In 2017, he played his first ATP at the 2017 Rotterdam Open but lost a match to Jo-Wilfried Tsonga.

Stefanos gained massive attention around the world after he won his first ATP match and soon ascended the ATP rankings following that year.

In 2018, he reached three ATP finals and also, won his first titled at the Stockholm Open and became the youngest player, beating the four top-ten opponents in a single tournament.

Most recently, the Greek tennis player continued his career reaching the semifinals at the 2019 Australian Open.

Stefanos Tsitsipas earns quite a hefty amount of net worth through his tennis career over the year. He has been playing tennis form age six and now, he became a pro tennis player and has won many titles.

Stefanos Tsitsipas net worth is $1.2 million, as of now. At the moment, he makes around $349,493 from the match. However, the player has not disclosed the actual salary to the public yet.

What do you think? Does the young tennis player have a girlfriend or not?

At present, Stefanos Tsitsipas is more focused on his career rather than falling in love.  Currently, he is single and unmarried — neither Tsitsipas posts photos on social media nor seen with any girl in public.