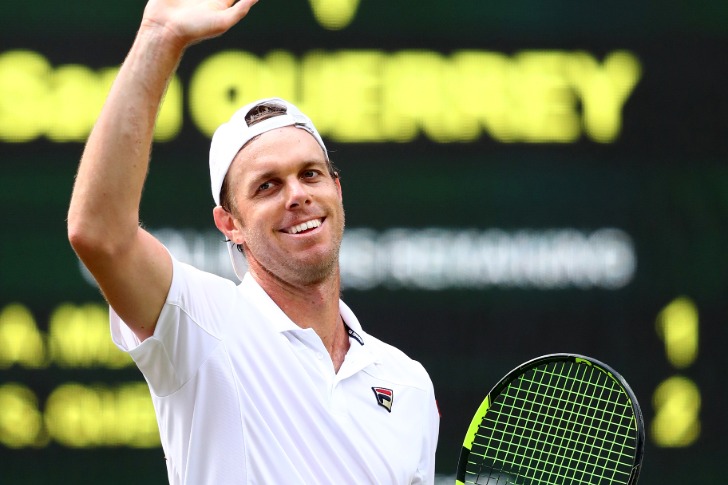 If you a tennis lover then you might have heard the name of Sam Querrey who is playing against Spanish tennis player Rafael Nadal in the Wimbledon quarter-final 2019.

Sam Querrey won ten career titles and was ranked number 17 in the world in January 2011. In 2017 Wimbledon Championships in a Glam Slam singles event, Sam reached the semifinal after defeating world No. 1 Andy Murray and also, he victoried over world No. 2 Rafael Nadal in the Acapulco final.

For more information about Sam Querrey is on the deck below.

Before the quarterfinal match, find out about this tennis star, here are some of his quick facts!

Born in San Francisco, California, Sam Querrey to American parents Mike Querrey, mortgage banker, on October 7, 1987.  He was introduced to tennis at age seven. Sam has a younger sister named Ellen who is an outstanding volleyball player.

Sam attended Thousand Oaks High School and completed in 2006. The University of Southern California offered him a scholarship but he turned it down to go pro.

Querrey is the first tennis player to win a challenger event in his debut pro season at the Yuba City and Winnetka Challengers. Following year, Querrey competed against many players such as José Acasuso, James Blake, Mikhail Youzhny, Juan Mónaco, Rafael Nadal, and  Andy Roddick.

The same year at US Open, Sam was defeated by Austrian Stefan Koubek at the first round. He ended in the top 50 at the end of the year, world rankings No. 47.

In 2008, S. Querrey won his first ATP titled after beating South African Kevin Anderson in the final at the Tennis Channel Open. Also, he represented the USA at the Beijing Summer Olympics and the David Cup match.

By 2009, Querrey defeated No. 1 seeded Tommy Hass at the LA Tennis Open and won the ATP titled after beating qualifier Carsten Ball. In 2011, Sam Querrey reached in the quarterfinals of ATP 500 Series where he was beaten by Juan Martin de Potro and Mardy Fish.

In 2012, at Farmer’s Classic, Sam played against Ričardas Berankis in the final and won the title. Then, Querrey defeated Novak Djokovic in the second round at the BNP Paribas Masters. Following the week, Querrey reached the final of Delray Beach Open where he beat American Rajeev Ram and won his first ATP title.

At the Delray Beach, S. Querrey triumphed over David Goffin, Dominic Thiem, and Nick Kyrgios at the ATP Acapulco tournament. At Wimbledon, Sam Querrey defeated Murray in the first semi-final but lost to Marin Cilic.

In 2019 Wimbledon, Querrey victories over Dominic Thiem, Andrey Rublev, John Millman, and Tennys Sandgren reached in the quarter-final. In the Wimbledon quarter-final, Sam Querrey vs Rafael Nadal will take place at Court 1.

Well, Sam Querrey is a married man and residing in Las Vegas, Nevada, the USA with his wife happily together.  Sam walked down the aisle with a model, Abby Dixon on June 2018 in Ft. Pierce, Florida.

His wife, Abby is 5 feet 9 inches tall who travels across the world due to work schedule. She modeled for many top brands and fashion designers.

The couple has been together since 2015 and even posts a series of pictures of them on each social media.

American tennis player Sam Querrey has a net worth of $12 million. He earned millions of salary over the career. He earned $11,466,578 in prize money.

His stats on the Wimbledon website show that he has won over 300 matches in his career. He has won nine titles so far and over $8 million in prize money. He steadily climbed to the top until his highest ranking of No. 17. He is currently ranked No. 28 in the singles division while he has earned a net worth of $12 million in his entire career.