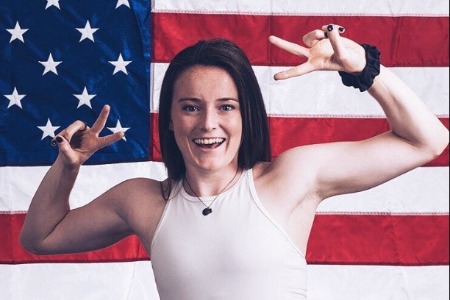 Rose Lavelle, the USA midfielder has capped off her breakout tournament that anyone could hardly imagine. Bursts of speeds, Rose scored the second goal in the 69th minutes, defeating the Netherlands 2-0 in Lyon, France. In the 2019 tournament, the American team has scored 26 goals.

Rose Lavelle, after graduation from college, began her professional career with Boston Breakers and now, she is playing for Washington Spirit.  Rose scored a brace in her first match, Team USA’s 13-0 masterclass against Thailand in June 2019.

Here’s what you need to know about everything about Rose Lavelle. Stay with us.

Who is Rose Lavelle?

American soccer player Rosemary Kathleen Lavelle was born on May 24, 1995, in Cincinnati to parents Marty and Janet. She has three siblings named John, Nora, and Mary. As of now, Rose is 24 years.

In addition, Rose is a sports enthusiast and has been playing soccer at a young age. Lavelle played soccer in her hometown, initially with Lakota Soccer Club at age eight and later joined the Cincinnati United Premier Soccer Club.

Growing up, Rose attended Mount Notre Dame High School. Then for further studies, she went on to the University of Wisconsin-Madison, where she majored in Sociology.

According to her school bio, she scored almost 57 goals by the end of her high school. Overall, she made first-team All-Big Ten and led the team in shots. As a junior, she was named first-team All-American by NSCAA.

The US soccer player Rose Lavelle started playing with many clubs before getting into the international level. During the 2014 season, Rose played with the Dayton Dutch Lions in the USL-W-League. Also, she took home the 2014 US Soccer Young Female Athlete of the Year.

Then in the summer of 2015, Lavelle played the Seattle Sounders Women of the W-League and also was named all-league. After the W-League. Lavelle returned to the Lions played Women’s PremierSoccer League season in 2016.

According to USA Soccer, overall, Rose was drafted No. 1 in the 2017 NWSL Draft by the Boston Breakers. After that, Lavelle made her U.S. WNT debut in 2017 and was named 2018 CONCACAF Women’s Championship. The same year, on 4  March, she played against England.

Then she scored her first international goal against Russia on April 9 and second game against Sweden on June 8 in Gothenburg.

In 2018, Rose Lavelle’s team played against Canada, scoring the U.S. 2-0 in the second minute of the 2018 CONCACAF Championship.

The 24 years old soccer player, Rose has been called the future of the U.S. WNT. Captain Megan Rapinoe scored the first goal off a penalty in the 61 minutes. Then Lavelle set the victory after scoring the second goal in the 69 minutes.

In the finale, she has more highlight than her incredible goals. She was awarded to the third-best player in the tournament. It is the fourth World Cup title in US history.

lNet Worth and Salary

Rose Lavelle is a professional soccer player in the USA. She has played numerous games over the career that accumulated quite a decent amount of salary. According to Oregon Live, the player minimum salary is $16,538 while the maximum salary is $46,200.

However, it is not clear how much does Lavelle and her teammates earn on both national and international team. Though as per sources, the team used to make just under $5,000 per match.

Does Rose Lavelle Have a Boyfriend?

Apart from her professional life, many fans followers are curious to know that is she in a relationship or single? So, the answer to this question is No. Rose is single and has not seen with any guy neither in public places nor in the function and parties.

The outstanding player is currently focusing on her career instead involving in the romantic relationship.

Rose has maintained her physique that suits her personality. She stands 5 feet 4 inches and her dark brown hair. However, Lavelle’s body measurement is not available on the internet.

Yes, Rose is active as @lavellerose on Instagram where she has more than 253k followers. Additionally, she has an account on Twitter and Facebook, where you can always get her updates from her social media.