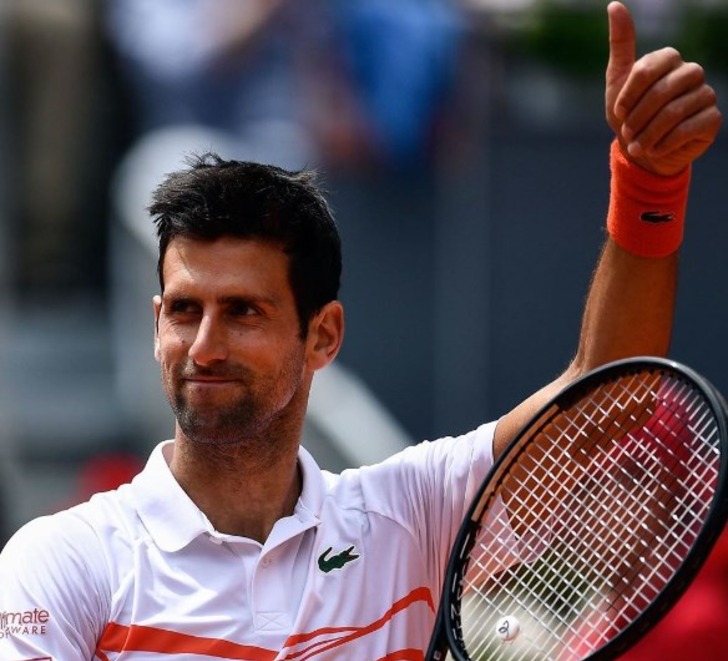 World’s no. 1 Wimbledon champion Novak Djokovic is through to his eighth semi-final at the All England Club in the previous ten years and the ninth overall, beating David Goffin in the quarter-final.

Djokovic is the first Serbian player to be ranked No. 1 by ATP and the first male player who has won 15 Grand Slam singles titles, five ATP Finals titles, 33 ATP Tour Masters 1000 titles, and 12 ATP Tour 500 titles in his career.

In this article, we are exploring details of Novak Djokovic profession, income, age, wife, and children.

But before getting into his biography, take a took at the quick facts!

Who is Novak Djokovic?

Novak Djokovic was born on 2 May 1987 in Belgrade, Serbia to father Srdjan and mother Dijana. His father, uncle, and aunt were all the professional Skiers. Additionally, his father was excelled at soccer. Novak has two siblings named Marko Djokovic and  Djordje Djokovic.

At age six, Noval spotted tennis legend Jelena Gencic at his parent’s sports complex. At the age of thirteen, Novak was sent to the Pilic Academy in Munich, Germany. And when he was 14, Novak began his international career, which is quite shocking for people.

Novak Djokovic started playing tennis at the age of four. At age 14, he ended as a Triple European champion in singles, doubles, and team competition. Djokovic won the silver medal at the World Junior Championship for Yugoslavia. When Noval was 16, he was ranked the 40th best junior player in the world.

In 2004, Novak won his first ATP Challenger tournament in Budapest, where he began as a qualifier. Then he was qualified at Wimbledon and reached the third and ranked into the Top 100.

The following year, Novak won the second Masters title in Montreal, defeating the top three players; Roger Federer, Andy Roddick, and Rafael Nadal and ranked No. 3 in the world. Djokovic competed in the 2008 Beijing Olympics where he won a bronze medal.

By 2011, Noval won a total of 43 matches and also, won the Australian Open, Wimbledon and the US Open, becoming the No.1 tennis player.

In 2014, Novak Djokovic won the second Wimbledon title and victory over second-time champions, Roger Federer. That same year, Novak defeated Andy Murray to reach in the semifinals for the eight-time. Subsequently, Kei Nishikori defeated him.

By 2015, at the Australian Open, Djokovic defeated Andy Murray and earned the fifth Australian Open title and the eight Grand Slam. In 2016, at Wimbledon, he was defeated by American player Sam Querrey in the first round and later that year, he lost to Wawrinka at the US Open final.

The following year, Djokovic defeated Nadal Rafael at Australian Open singles. As of 2019, after beating David Goffin in the quarter-final on 10 July 2019.

He defeated many higher ranking players that include P. Kohlschreiber, Denis Kulda, Hubert Hurkacz, Ugo Humbert, and David Goffin to reach the semifinal.

Well, don’t forget to see the semifinal match, Novak Djokovic vs. R Bautista Agut. In your opinion, who will go to the final.

Novak Djokovic is a married man and father of two children. He has been married to his wife Jelena Ristic, a former model since 2014. He met his wife back in 2005 while they’re in high school. Soon their friendship turned into a relationship and began dating. They have been together for more than a decade.

After being a relationship for more than eight years, the couple got engaged in 2013 and walked down the aisle on July 14, 2014, in Montenegro after winning Wimbledon.

Novak and Jelena blessed with two adorable kids. His wife gave birth to their first child, a baby boy named Stefan on October 21, 2014.

They welcomed their second child, a beautiful daughter, Tara, born on September 2017. Moreover, the tennis player founded the Novak Djokovic Foundation for the disadvantaged children in Serbia that aim to provide a healthy lifestyle.

In addition, Novak was linked to many ladies like Javelin Thrower, Leryn Franco, and Serbian singer Natasha Bekvalac.

Novak Djokovic Net Worth and Salary

The No. 1 tennis player earns a hefty salary from his tennis career and brand endorsements. Novak Djokovic has a net worth of $200 million.

According to Forbes, Djokovic earned a salary of $23.5 million from the matches and endorsements.  Moreover, Novak hs won over $129 million prizes from the tournaments.

Not only from the matches but he also makes extra income from the brand endorse that added to his net worth. He has dealt with Lacoste and Uniqlo.

Novak has a three-bedroom, three, a half bathrooms and a giant building on the shore that relocated in Miami’s Eighty-Seven Park. Besides, it has a suntanning deck, bar and two gardens.

Additionally, the tennis player has two condos in New York City that cost over $10 million.

Serbian professional tennis player already won million of people hearts across the world through his performance. On his social networking sites such as Twitter, Facebook, and Instagram has a large number of fans followings.