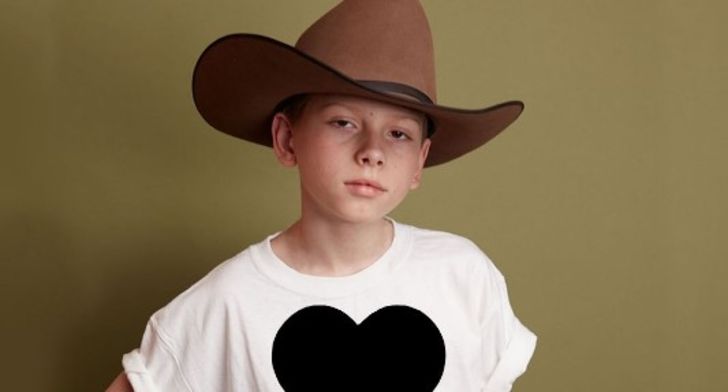 YouTuber-turned-country singer, Mason Ramsey found fame at early teen singing a cover song of Hank William‘s Lovesick Blues in his hometown. The song has garnered over 15 million views on his self-titled channel which has over 678k subscribers and 53 million views.

As the internet personality, Manson won the millions of fans’ hearts and stepped in the music industry in 2018. Since then, Ramsey has been charmed on the national television and become the biggest little star in Country music. In addition, he influenced by famous artists like Elvis Presley, Buddy Holly, Randy Travis as well as pop stars including Keith Urban, Ed Sheeran, Blake Shelton and so on.

Here, we are exploring the details of the young and talented country singer’s bio, age, net worth, and more.

Before that, let know some quick facts of Mason Ramsey.

American singer Mason Ramsey was born on November 16, 2006, in Golconda, Illinois, U.S, making him age 12. His zodiac sign is Scorpio. When Mason was just three weeks old, he started living with his grandparents named Ernest and Francis Ramsey.

Additionally, Ramsey loves to play basketball. Once in an interview, Mason said that he used to be No. 1 scorer while studying at 5th grade. Now, he has no one to play with. Talking about his education, he is homeschool.

From the age of four, he started singing for Josh Turner and Gene Watson at Carson Center. Then at age seven, Mason sang on Christmas Tv show along with Kenny Rogers.

Ramsey widely recognized after singing  Lovesick Blues in a Walmart store in Harrisburg, Illinois that went viral on all social media platforms and was entitled as ‘The Walmart Yodeling Boy‘ from that performance. As of now, he has signed a record deal with Big Loud and Atlantic Records.

He is the youngest country artist to sign a record label in a generation. Mason released his first debut single Famous on April 2018. The single charted at number 62 on the US Billboard Hot 100 and No. 4 on Hot Country Songs.

Keith Urban: What Is His Net Worth? Who Is He Married With? >>

It debuted with 10.8 million US streams and sold 19,000 in its first week. That same year, he performed with DJ Etha Snoreck at Coachella.

After his first EP title, Ramsey returned in 2019 with a new single Twang alongside a music video.

on the music video, Ramsey appeared using his cowboy charms in school to a girl who is twice his height. he describes how she loves him for twang and reminds her a little Hank. Since the song has been released on YouTube, it has garnered over 4 million views within a month.

The Famous singer salary is estimated to be hundreds and thousands of bucks. According to Social Blade, Ramsey makes monthly between $1.4K – $23.2K and yearly estimated around $17.4K – $277.8K.

Moreover, he got a college scholarship worth $15,000 for his future. As per sources, the young country singer has an estimated net worth of $1 million.

Other than that, Mason has his own merchandise where he sells apparels and accessories.

Does Mason Ramsey Have a Girlfriend?

Well, Mason has no girlfriend and is too young to be in a relationship. At present, he is focusing on his study to make his future better. We hope in the near future, Mason will find his perfect match whom he can spend his whole life.