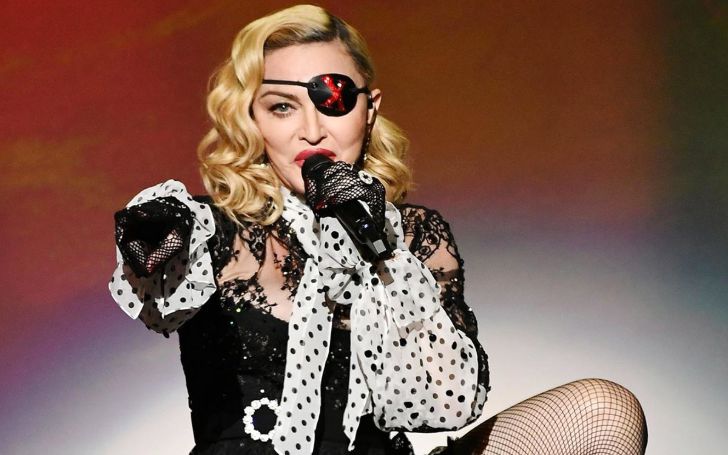 “Cause we are living in a material world, and I am a material girl.” Whenever we think of Madonna, things like an iconic, revolutionary, diva and anything that represents a strong and independent woman pops up. And indeed Madonna, with the net worth of $850 million, is iconic on its own.

Truly, Madonna is a force to be reckoned with. One must know that the title ‘Queen of Pop’ does not come easily. And to think she has held on to this title for decades is commendable enough.

Today, we will be talking more about the pop diva and original ‘material girl’ of the entertainment world. So, brace yourselves because it is going to be a long one.

Let’s begin with some facts first.

Madonna Net Worth and Income

Hands down, Madonna is one of the iconic pop stars of our generation. Since the beginning of her career in music, this diva was known for her eccentric music and, of course, wardrobe. Well, her personality and music have not only earned her fame but wealth as well. As of 2020, Madonna has a whopping net worth of $850 million.

Amazed but not surprised! She is Madonna, not some stars who came, gave one hit and poof, gone. Madonna has been in the music industry for over four decades now, and she is still going strong.

Moreover, Madonna is considered as the best-selling female artist and the fourth best-selling artist of all time. As of now, Madonna has sold over 300 million records globally and grossed more than $1.5 billion from concert tours alone.

Mansion Befitting The Queen of Pop

Having such profound wealth and even quoted as the Wealthiest female Musician of all time by Forbes, the question arises, where does Madonna live? And where does the money go?

One of the richest musicians of all time, Madonna, has not one but countless luxurious houses all over the world. Depending on her tour dates and other ventures, the global icon moves from one home to another.

Mansions in Portugal and London

Currently, Madonna is living in a historic Quinta do Relogio estate located in Sintra, Portugal, about 20 miles outside of Lisbon. Built-in the 18th century, the house covers a massive 16,146 square feet and has four bedrooms and seven bathrooms.

Surrounded by a lake and lush vegetation, the American pop singer spent around $8,927,470 for the house. Now that’s a lot!!

However, it is not the only mansion that the star owns. In addition to this, Madonna owns her second house in London and another one in New York. Located in the poshest area of London, the Georgian Townhouse is a classy six-story brick house with ten bedrooms, a built-in studio, and an adjacent Staff’s bungalow, coming at a value of $8 million.

It would be weird for the American star not to own a house in the states. And in Madonna’s case, it is more like a mansion than a home. The global pop icon owns the Manhattan Apartment located at 152 East 81 Street in Manhattan, the Upper East Side.

Likewise, the star grabbed the neighboring two houses and combined them to make an ideal home for her and her children. Valued at $40 million, the famed Manhattan house has thirteen bedrooms and a notable king-size library and a 3000 sq. Feet garden.

It is a known fact that Madonna is a millionaire. She has earned enough thanks to her successful musical career and other ventures in-between. Aside from owning luxurious cars and houses, the star is also an avid art collector.

The pop icon is such an art fan that at this point, Madonna has a collection worth over $100 million. Similarly, the ‘Material Girl’ singer has got an exquisite taste in art, thanks to which she owns many valuable artifacts dating back to a hundred years.

Likewise, Madonna owns one of only five paintings created by Frida Kahlo in addition to the work of other artists like Picasso, Diego Rivera, Damien Hirst, and Marilyn Minter.

Madonna: Age and Height- How Old Is Madonna?

Despite being in her 60s, the versatile singer and producer have not lost her charm. Standing at 5 feet 4 inches(164 cm), the pop singer weighs around 55 kg(119 lbs). Moreover, being the original sex-icon of the 1980s, Madonna has retained her youthful figure. Her attractive figure measures 35-25-36 inches, making all women envious.

Similarly, Madonna has lustrous blonde hair and striking blue eyes. On top of that, she has a beauty mark or mole on her right cheek, just above her lips. And aside from her personality and persona, the mole adds more to her already exuding sex-appeal.

Madonna whose full name is Madonna Louise Ciccone was born in Bay City, Michigan, the United States of America. The Pop Icon is the daughter of father Silvio Anthony ‘Tony’ Ciccone and mother, Madonna Louise. Since she and her mother shared the same name, Madonna was often called ‘Little Nonni.’

Likewise, the pop diva is an American and belongs to mixed ethnicity. Her father belonged to Italian emigrants while her mother was of French-Canadian descent. Sadly, Madonna’s mother passed away from breast cancer when the singer was just five years old.

As for her education, the young Madonna went to many schools before attending Rochester Adams High School. Later she joined the University of Michigan School of Music through a dance scholarship. However, she then dropped out to pursue her career in dancing.

Talking about her career, Madonna commenced her musical career as a backup dancer and singer for the French disco artist Patrick Hernandez. During that time, the star got close to musician Dan Gilroy. Similarly, with him, the young Madonna formed her first rock band, the Breakfast Club with drummer, Stephen Bray.

However, Madonna later left the band and decided to promote herself as a solo act. Following the event, she was signed by Sire Records and released her first solo debut single, Everybody.

Similarly, Madonna’s second single Burning Up, along with the first single, got great reviews from the audience. Both of the singles became a big club hits in the United States. Following the success, Madonna released other singles such as Holiday, Borderline, and Lucky Star.

Along with her music, Madonna also caught the attention of many with her bold looks and styles. With the hype in the entertainment world, numerous girls and women started idolizing her and even started copying her style.

Moreover, Madonna’s signature blonde hair, vibrant attires with laces, and fishnet stocking became a hit with the girls. Her fame reached a new height after releasing her second studio album, Like a Virgin. The album instantly shot to number one in Germany, Italy, Netherlands, New Zealand, Spain, the UK, and the US.

Madonna also became the first female to sell over five million copies in the states. The album was later certified diamond and has sold over 21 million copies worldwide. However, the young singer also received several backlashes for her provocative dance moves and for promoting premarital sex.

Rise to Stardom: Music and Albums

Despite the negative comments, Madonna’s ‘Like a Virgin’ performance at the first 1984 MTV Video Music Awards garnered massive media coverage. With a white wedding dress and white gloves, she appeared atop a giant wedding cake and then rolled around on the stage. That performance is still considered as one of the ‘most iconic’ pop performances of all time.

Likewise, her second single, ‘Material Girl,’ reached number two on the Hot. Some of her other remarkable songs include Crazy for You, Gambler, Into the Groove, Angel, Papa Don’t Preach, You Can Dance, and others.

Well, the ‘Material Girl’ singer has earned a lot from her music career. However, Madonna’s staggering net worth of $850 million does not come from that alone. Aside from being a famed musician, she is also an actress, dancer, record producer, and author.

In 1986, the diva Madonna starred in the movie Shanghai Surprise, not as a singer but as an actress. For her role in the film, the now actress received her first Golden Raspberry Award for Worst Actress.

Later, the singer made her theatrical debut in a production of David Rabe’s Goose and Tom-Tom, followed by the feature in Who’s That Girl. Then in 1990, Madonna starred as Breathless Mahoney in the movie, Dick Tracy.

Madonna’s Personal Life: Boyfriend- Who Is She Dating Now?

Just like her professional career, Madonna’s personal life is also much talked about in public. Known for dating men with various backgrounds, from artists to models and from directors to trainers, her dating life is indeed colorful, like her musical career. However, hardly most of them were successful as her career.

But that does not mean the diva is single. In fact, at the moment, Madonna is in a relationship with Ahlamalik Williams, one of her backup dancers. The rumors of them dating have been going around for months before Williams’s father, Drue, confirmed the news.

According to Drue, the two met for the first time in 2015 when the young Ahlamalik auditioned for Madonna’s Rebel Heart Tour. And that the singer personally picked Williams out of the group.

Moreover, the father explained how the 61-year-old musician invited them to her suite and told them how much she loved Williams. Indeed, love is in the air, but with this, people are also going wild, looking at their age gap. At the moment, Williams is just 25 while Madonna is in her 60s.

However, most people were not surprised upon hearing the news. This is not the first time she has dated someone younger than her. Back in 2011, Madonna blew the net with her dating news. Apparently, at that time, the American star dated Brahim Zaibat, a young French dancer from 2011 to 2013.

Madonna: The Pop-Star’s Not So Successful Marriage Life

Previously married, the singer first tied the knot with actor Sean Penn in 1985. The two met while working in the video ‘Material Girl.’ They married on her birthday in the year 1985. Sadly the relationship did not last enough, unlike her musical career.

Likewise, in 1989, the once high-profile couple ended their relationship, just after four years. After that, Madonna had her fling with lovers that did not last long either. From her short relationship with Carlos Leon, a personal trainer, she has a daughter named Lourdes, who was born in 1997.

Again, in 1999 Madonna began her relationship with Guy Ritchie, a British director. This is her most prolonged and the tamest relationship to date. Similarly, the couple first met at a party hosted by Sting in 1998 and soon got married two years later in 2000.

Madonna, at that time, was 42 and was ten years senior to Ritchie. Also, that same year, the pop diva gave birth to her second son named Rocco. However, this relationship could not last long, and soon the duo went through a divorce. As a matter of fact, the superstar was rumored to be having an affair with baseball player Alex Rodriguez.