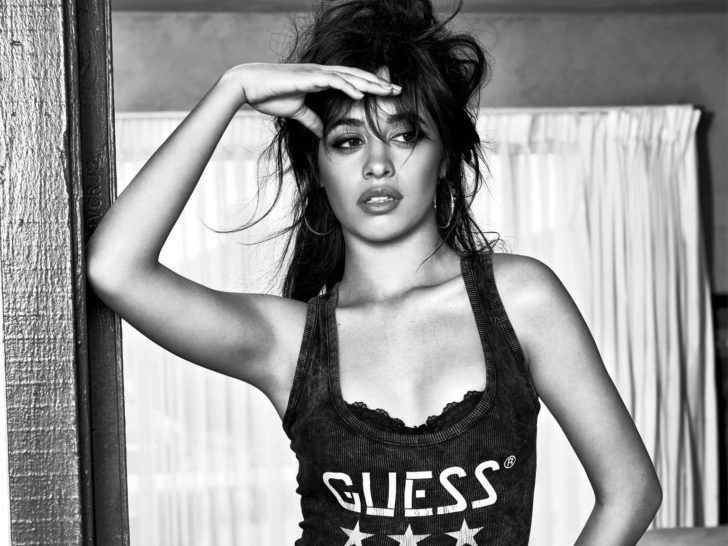 Camila Cabello is an American songwriter and singer who went to the top as a girl group member, “Fifth Harmony.” She produced a drastic exit from the group in 2016 and her incredibly hit song “Havana” in 2017 had everyone singing and dancing. While she was well recognized with Fifth Harmony, her popularity increased in 2017, and since then she has continued to create waves.

But let us allow to provide some quick facts right here right now.

Who is Camila Cabello?

Born in Cuba, Camila Cabello resided in Havana’s capital. She then relocated to neighbor Mexico when she was five years old, before moving to the United States.

Cabello joined four other female singers to become the Fifth Harmony after auditioning as a solo performer on the second series of The ‘X Factor’ US version.

Born in Havana, Cuba to Sinuhe Estrabao and Alejandro Cabello, Camila Cabello AKA Karla Camila Cabello Estrabao grew up in the city of Cojimar in East Havana. Furthermore, she has a younger sister, Sofia.

Camila Cabello and her family moved back and forth between Havana and Mexico City for most of her early lives before moving to Miami, Florida, when Cabello was five years old in the United States.

In 2008, Camila Cabello obtained American nationality. Cabello attended Miami Palmetto High School but left to follow her singing career in the school year 2012–2013 while she was in 9th grade. She later graduated from high school.

Between 2012 and December 2016, Camila Cabello stayed in Fifth Harmony. With Ally Brooke, Normani Kordei, Dinah Jane and Lauren Jauregui, she starred in the group.

The group, Fifth Harmony, signed a joint agreement with Simon Cowell‘s record label Syco Music and Epic Records in January 2013 following their success with the US version of The X Factor.

After four and a half years, Camila decided to leave the group on December 19, 2016. Just hours after taking the stage for iHeartRadio’s Jingle Ball in Florida, the 19 years old left the band.

She later explained to Dan Wootton of The Sun,

“I’m so proud of everything that we achieved together and every moment that we had together.”

“But you know, just like any artist I felt like it was time to explore my own artistic vision so I just followed my heart and here I am.”

Cabello’s exit from the group caused a great deal of tension as her former bandmates rushed to unfold her on social media after claiming she hadn’t told them she’d left.

The remaining girls also challenged Bizarre Editor Dan over their former bandmate’s interview questions-leading him to proclaim it was clear why Camila Cabello couldn’t wait to quit.

Recently, Camilla hit back on claims that Taylor Swift was behind her girl-band exit, instead insisting on talking about love and boys whenever the two hang out.

Despite the ill-feeling of the remainder of the band who announced their separation, Camila said about the rest of the group,

“I genuinely wish them the best and I just have a love for them and the whole journey we went through, I feel like now that it’s been a year and a half I totally respect the time and the memories we had. I don’t want to disrespect it.”

Cabello appeared to be testing the waters for going solo before Camila left the group. In November 2015, Camila published a duet that was called I Know What You Did Last Summer with Canadian singer Shawn Mendes.

Camila scrapped her earlier scheduled album after landing one of the greatest hits of the year with Havana and came back to the studio.

The self-titled debut broke records in 99 nations around the globe by peaking at the top place on iTunes. Furthermore, Havana recorded number one on the UK chart for five weeks, overtaking Adele‘s record for Someone Like You in 2011.

Shawn Mendes and the Havana singer, Camila Cabello have continuously insisted that they are just friends, despite constant rumors of their alleged connection.

The two have commonly communicated certain information of internet friendship, posting pictures and sending supportive emails – this sometimes only serves as a fuel for their fans who wish they were together.

During a Taylor Swift show where they both played, the duo wrote their hit song; I Know What You Did last summer. Camilla was still with Fifth Harmony at the moment, and she was playing with her group. Their connection has only evolved since then, and they both now recognize as the BFF of each other.

Recently, however, Camila Cabello opened with fellow musician Shawn Mendes about her bond, telling an interviewer that “I just trust him.”

After releasing a steamy music video for “Senorita,” which marked their second partnership, the pair sparked relationship rumors. Although the talks have yet to be verified, the two continued to fuel them when they were allegedly spotted kissing on Saturday, per TMZ.

TMZ reported, For that matter, Shawn feels like he’s just rolling out of bed, Camila too. And they are in a relationship.

Shawn’s in San Fransisco for having a concert on Monday and Tuesday (14 July 2019 and 15 July 2019) at the Oakland-Alameda County Coliseum. He’s touring the United States at the moment.

That may be the reason why he is comping with Camila. However, Shawn is 20 years old on the other side, Camila is 22 years old.

As of 2019, Camila Cabello is earning a net worth of $12 million in jaw-dropping. She published her debut Camila album on the US Billboard, which reached #1. It has been awarded in America and Canada as a Gold album.

In the second week of January 2018, the album sold over 119K units. Her album for each audio cd is accessible at $9.97. Her earnings from the debut album are reported to be $1 million.

The singer is a former Fifth Harmony member, worth $5 million. She was performing for the band for two years. She gained almost $500K each year during her career with Fifth Harmony.

Camila Cabello has participated in numerous works of charity. She partnered with Save the Children in February 2016 to design a limited edition ‘Love Only‘ T-shirt to assist increase awareness of problems that involve equal access for women to schooling, health care, and possibilities.

She assisted with other performers to build the single charity Power in Me in June 2016. Later, in 2017, Cabello joined various Latin performers on the song ‘Almost Like Praying’ to help the communities impacted by the Hurricane in Puerto Rico.