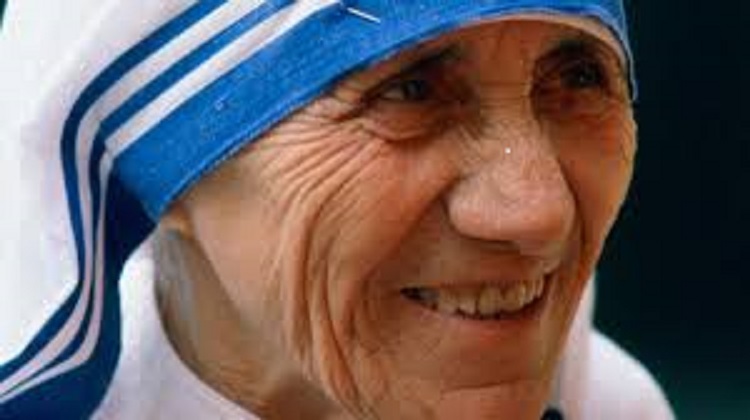 Read on to know more about Mother Teresa and why the diminutive saint who had died decades ago, is dragged in a recent U. S electoral campaign controversy.

Canonized as a saint a day before her 19th death anniversary, Mother Teresa, or Saint Teresa of Calcutta, embodies unfeigned humanity. Clad in blue-edged sari, the diminutive woman with wrinkled face is an icon of unmatched spiritual and charitable resolve.

Also known as the “Saint of the Gutters”, she often interacted with the poorest among the poor, and the rich and powerful. But she lived without the comfort of material possessions and died with almost nothing.

Mother Teresa and Her Charity’s Net Worth

Mother Teresa won the Nobel Peace Prize in 1979 for which she was rewarded $192K. She asked the Nobel committee to skip the extravagant dinner and donate the money to the poor.

According to a blog post, upon an inquiry into the Missionary of Charities’ (MoC) actual funds, the Indian Finance Ministry listed the amount as “classified information”.

In Germany, a certain Maria Tingelhoff, who had handled the organization’s bookkeeping works until 1981 estimated an annual DEM 3million ($1.6M) in the congregation’s coffers. Susan Shields, a former MoC nun for nine years, said there was $ 50M in the groups’ New York bank account, at one point.

Born Gonxha Agnes Bojaxhiu in Skopje, the capital of North Macedonia, she is the youngest child of Nikola and Drana. She was baptized a day after her birth, received her first communion at age five and was confirmed at age six.

At an early age, Gonxha showed interest in the lives of missionaries in Bengal and wanted to be one, according to a book written by Joan Graff Clucas.

She went to a convent-run primary school state-operated secondary school, where she sang in the local Sacred Heart choir. While attending the annual pilgrimage to the Church of the Black Madonna in Letnice, at age 12,  she realized her calling to the religious path. 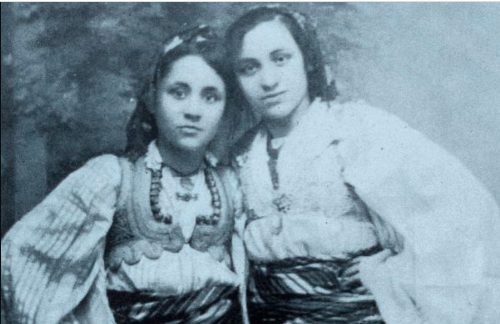 The Bojaxhius were devout Catholics, and family head Nikola was devoted to the  local church. He was an active supporter of  Albanian independence. To raise the family, he worked as a building contractor and sold medicines and other goods.

When Gonxha was eight, her father Nikola suddenly felt ill and died, leaving her mother, Drana, with a challenge to raise the family by herself. Despite this, Gonxha was raised well, and the cornerstone of her religious formation remained solid. She was deeply involved in Jesuit parish of the Sacred Heart.

An adent desire to become a missionary prompted Gonxha to leave Skopje at 18 to join the Sisters of Loreto at Loreto Abbey in Rathfarnham, Ireland. She learned the English language there. 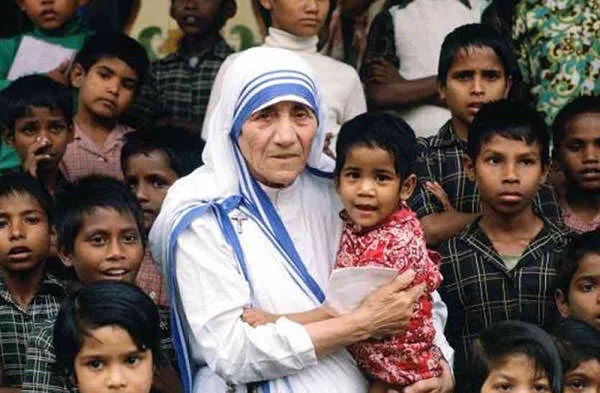 She arrived in Calcutta on 6 January 1929 and began her novitiate in Darjeeling, where she learned Bengali and taught at St. Teresa’s School near her convent.

On 24 May 1931, she took her first religious vows and adopted the name sister Mary Teresa after the patron saint of missionaries, St. Therese of Lisieux. Six years later, she took her Final Profession of Vows of poverty, chastity and obedience,  on 14 May 1937. She was concurrently a teacher at the Loreto convent school in Entally, eastern Calcutta.

Teresa worked in the school for almost 20 years, where she was appointed  as

headmistress in 1944. The glaring poverty in Calcutta disturbed her, compounded by the Bengal famine of 1943 and the brewing Muslim- Hindu violence sparked by the Direct Action Day in August 1946.

Mother Teresa’s “Call within a Call”

It was while riding a train from Calcutta in 1946, that Mother Teresa had her second calling. In what she termed as the “call within a call”, she said Jesus spoke to her and told her to abandon teaching to work in the slums of Calcutta aiding the city’s neediest and sickest people.

It took more than a year of lobbying and convincing before her convent approved to support her new calling.

Her life transformed forever, when in August 1948, wearing a blue and white sari, she left the convent to start her mission in Calcutta’s streets. She held on to nothing but the goal to provide aid to “the unwanted, the unloved, the uncared for.” 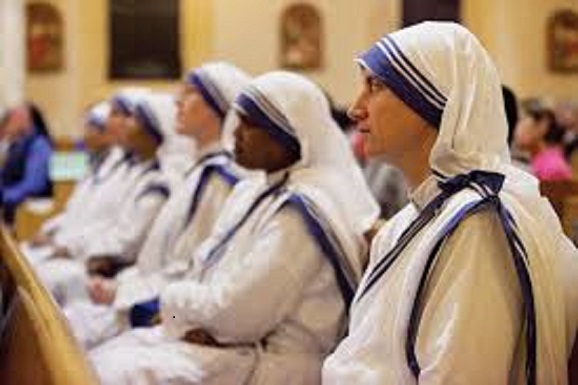 To further solidify her lifelong mission and calling, Teresa founded the Missionaries of Charity in 1950— giving attention to those who are ostracized— refugees, former prostitutes, mentally ill, sick and abandoned children.

The congregation operates homes for the sick and needy, particularly to those who are dying of HIV/AIDS, leprosy and tuberculosis. They did this by running orphanages and schools, soup kitchens, dispensaries, mobile clinics, children’s and family counselling programmes.

As of 2012, the congregation has over 4,500 religious sisters. Like their founder Mother Teresa, Missionaries of Charity members take vows of chastity, poverty, and obedience, and also profess a fourth vow—to give “wholehearted free service to the poorest of the poor.”

The Saint of Calcutta

It would have been difficult for a Roman Catholic missionary to get recognition in a predominantly Hindu country. But Mother Teresa got more than a simple acknowledgment. Within 10 years, she was recognized as “the saint of Calcutta,” for carrying out her charity work in India’s slums.

As a sign of respect, people would bend to touch her feet as she shuffled through the crowded streets. In response, and to discourage the act, she would try to lift her fans up, according to Navin Chawla, who released a book about Mother Teresa.

An interview for a BBC TV program in 1967 put Mother Teresa in the international spotlight. After the meeting, famed journalist Malcolm Muggeridge was awed by her that one year later he traveled to Calcutta for a documentary called, Something Beautiful for God, about Teresa’s “House of the Dying”. Muggeridge would also write a book with the same title years later.

Just two years prior to the interview, in 1965, the congregation branched out of India, with the first house opening in Venezuela. In 1971, the Missionaries of Charity opened its first house in the U.S, in New York. At present, they operate in 25 of the USA’s 193 Catholic Diocese.

Globally, the congregation has nearly 600 clinics, orphanages, soup kitchens, maternity homes, refugee centers, and homes for the poor, sick, and dying in more than 100 countries.

She is recipient of the Bharat Ratna, the highest civilian honor in India, in 1980.

The international community recognized her efforts via the Ramon Magsaysay Award for Peace and International Understanding in 1962; and the Pope John XXIII Peace Prize 1971. She was also appointed as an honorary Companion of the Order of Australia.

A Roman Catholic saint has to undergo a lengthy process of beatification and canonization. If all the criteria have been met, the pope will conduct a special Mass where the person is recognized as such.

Mother Teresa was beatified in 2003 and canonized a day before her 19th death anniversary, on 04 September 2016. According to New York Times, it is one of the fastest processes done in recent times, partly because she was close to the Vatican, and was often asked by then Pope John Paul II to visit him in Rome. 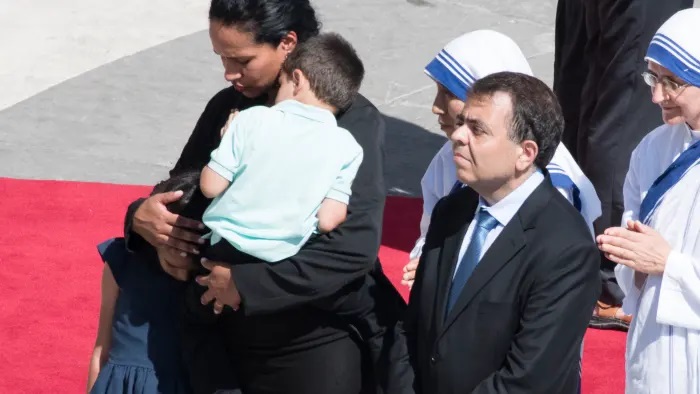 The first miracle attributed to Mother Teresa involved Monica Besra, who, in 1998, had a serious abdominal tumor that doctors could no longer remove.  Monica went to pray at the Missionaries of Charity chapel. After a miraculous medal that touched Mother Teresa’s body was placed on Besra’s stomach, the tumor reportedly disappeared.

The second miracle involved a Brazilian Marcilio Haddad Andrino who was dying and in comatose due to brain infection. His wife, Fernanda, prayed to Mother Teresa for help and placed the relic, a wedding gift from a priest, on Marcilio’s head, and he later recovered.

Mother Teresa was equally revered and criticized, mainly due to her staunch opposition to abortion and for providing inadequate care to the vulnerable sectors. Critics allege fund mismanagement and misuse as the care centers and orphanages maintained by her order were substandard.

Dr. Robin Fox visited Home for the Dying in 1994 and wrote about the experience in the British medical journal, The Lancet. One of the glaring observations according to Dr. Fox was that patient care was provided by untrained volunteers and relief for the dying was inadequate.

Dr. Aroup Chatterjee, a London-based physician who grew up in Calcutta, published “Mother Teresa: The Untold Story” in 2016, which challenges one’s view of Mother Teresa as a saint. He said he found a “cult of suffering” in homes run by the Missionaries of Charity.

In 1994 a highly unflattering documentary titled Hell’s Angel was made as an exposé on Mother Teresa’s questionable works.  Dr. Chatterjee said he found a “cult of suffering” in homes run by Mother Teresa’s organization, the Missionaries of Charity, with children tied to beds and little to comfort dying patients but aspirin 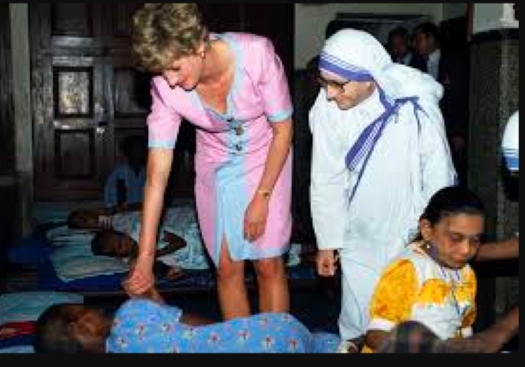 After suffering from various illnesses in 1996, including pneumonia and malaria, Mother Teresa died at 87 on 05 Sep 1997. The world had already mourned the death of an equally famous humanitarian, Princess Diana, few days prior.

The two women had been together in New York months earlier, TIME columnist Roger Rosenblatt noted. They developed a friendship from having shared advocacies.

In a moving letter to the editor, a reader had a reaction to Mother Teresa’s obituary: “Let it not be said that Mother Teresa died of heart failure. It is far more accurate to say she had at long last given all her heart away.”

She had died over two decades ago but her name was dragged in a recent US Congressional campaign issue.

Florida lawyer Jim Towey, who represented Mother Teresa for decades when she was alive, sent Republican Chuck Dietzen, one of the 15 candidates for Indiana’s 5th Congressional district, a cease and desist order asking the latter to pull out his campaign ad showing him and Mother Teresa in an old photo. 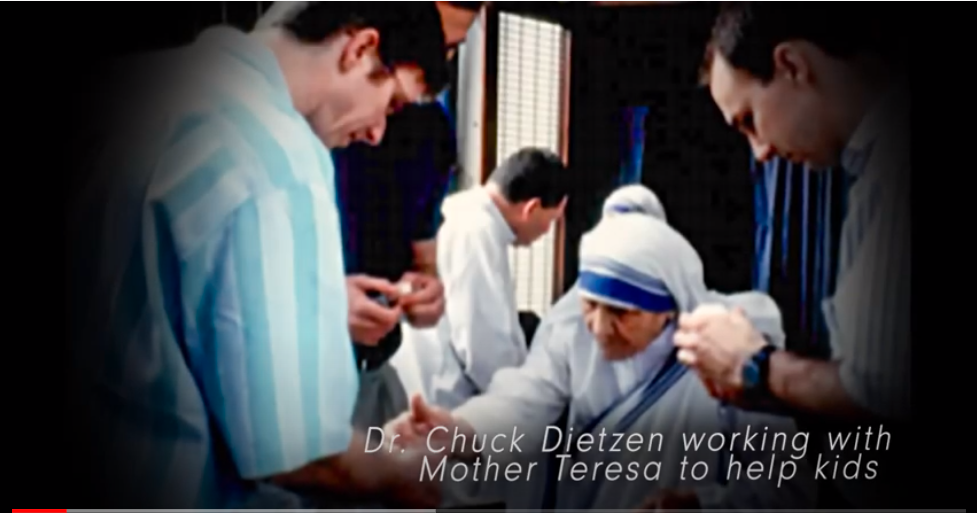 Towey chided Dietzen, saying Mother Teresa in her lifetime strictly prohibited using her name, image and likeness for any political purpose or message.

The former Chief of Pediatric Rehabilitation Medicine at Riley Children’s Hospital met Mother Teresa in one of his trips to India in the 90s, while he was assisting surgeries performed on children with polio and cerebral palsy.

Dietzen’s camp responded to Towey by asking for proof that he still represents the Missionaries of Charity. In the 2007 Presidential candidate Hillary Clinton removed Mother Teresa’s image in her Presidential campaign at the request of the said group.