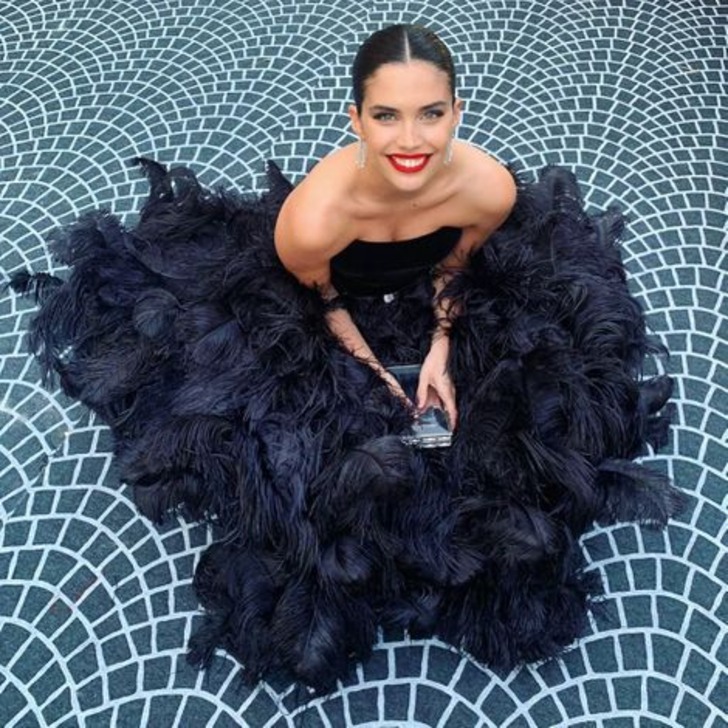 “As women, we need to stand together. We are judged and objectified often enough by men.” Portuguese model and actress Sara Sampaio is best known for her work with Victoria’s Secret.

Over the year, Sara won five Portuguese Golden Globes for Best Female Model. In her career, she appeared in the cover magazine such as GQ, Elle, and Vogue.

Well, If you are searching about Sampaio then this is for you. Also, find out the figure of net worth and her relationship status.

Before that, know some quick facts of Sara Sampaio.

Born on July 21, 1991, Sara Sampaio is the daughter of Armando Sampaio and Cristina Sampaio. She grew up in Porto, a coastal city in north-west Portugal. Her birth name is Sara Pinto Sampaio. Additionally, she has a brother named André.

After high school, Sara enrolled in the University of Lisbon. At the time, she worked as a part-time editor in a small office. Meanwhile, she got an opportunity for modeling and even appeared in a commercial.

Eventually, Sara moved to New York City to make her career in modeling.

At the age of 15, Sara Sampaio came to limelight for the first time but had to wait until age 16 so she could participate in the competition. Then Sara was signed to a modeling agency after winning modeling competition.

Later in the USA, Sara became one of the most prominent ambassadors for Axe body spray. In April 2012, she featured on the cover of Portuguese Vogue.

After that, Sara signed to Calzedonia Mar. Following the year, Sampaio was the first Portuguese supermodel to appear in the Sports Illustrated Swimsuit Issue.

Moreover, she has appeared in several top magazines such as Elle, GQ, Vogue, Maxim, Harper’s Bazaar, Glamour and so on. In 2017, Maxim included her in a list of ‘The 20 most beautiful Angels of all time.’

In 2019, Sara received a nomination for a CinEuphoria Award for Best Ensemble – National Competition for Carga.

Other than that, Sara Sampaio appeared in the movies The Clapper and Carga. In addition, she featured in the TV series Billions in 2017.

Besides, Sara made her appearance in numerous music videos including Selena Gomez‘s Hands to Myself, Kanye West‘s Wolves, David Guetta feat. Justin Bieber‘s 2U and more.

As of now, Sara Sampaio has a net worth of $10 million. Her most income comes through her modeling and some extra worth from acting.

Furthermore, the model added her net worth associating with the different luxury fashion brands like Asos, Armani Exchange, Calzedonia, Victoria’s Secret and many more.

Who is Sara’s Boyfriend?

At present, the Portuguese model is in a relations ship with a British businessman, Oliver Replay, founder and CEO of Ocean group. She and Oliver dating since 2015.

In May 2018, the couple was seen hand-in-hand during the Cannes Film Festival. Thus, the love bird often spotted in different events and parties.

Further, Sara and Oliver attended the 2019 Cannes Film Festival and attended Once Upon a Time in Hollywood movie premier and even she shared a picture of them on her Instagram with a caption. She wrote;

“With my love at the Once Upon a Time in Hollywood premiere yesterday in Cannes! What an awesome movie!! And so in love with this @georgeshobeika dress”

The beautiful model is never shy to flaunt her love life on social media. She posts numerous photos of them on her social pages so her fans could see it.

Back in 2012, Sara was romantically linked up with River Viiperi for a couple of months. Also, she had an affair with American singer, Alex DeLeon.

Additionally, Sara rumored to date One Direction’s singer Harry Styles when they were seen together back in June 2015.

In 2017, again, there was a rumor that she and Nick Jonas were dating and also, spotted on a bowling date in February. Nevertheless, the two denied all the dating rumors.

The model is now 28 years old. She stands tall with a standard height of 5 ft 9 inch and weighs around 119lbs. Her zodiac sign is cancer. Though her body measurements are not available.

The model has accounts on several social media where she has massive numbers of fans followings. Sara has over 7 million followers on Instagram. Hence, Sampaio makes impressive money between $18,208-$30,346 per post on her Instagram