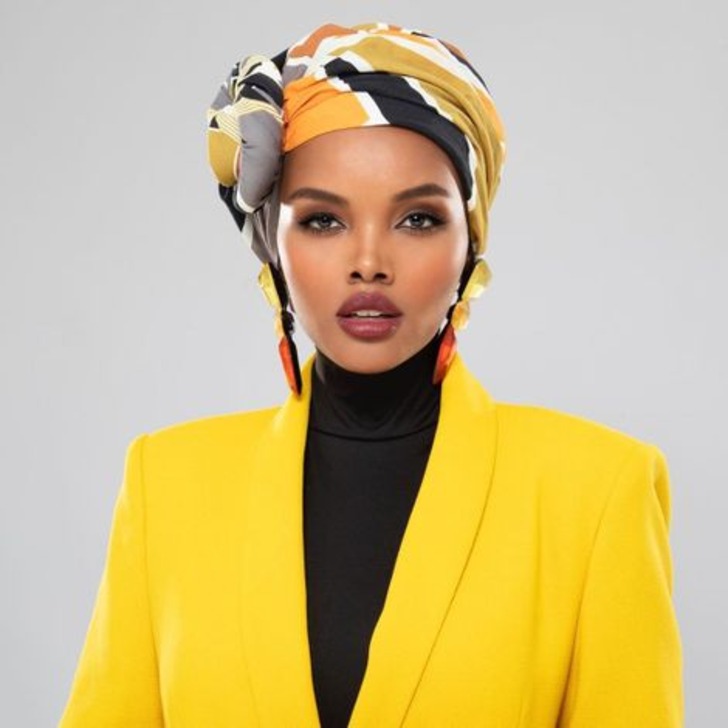 Somali-American fashion model Halima Aden is the first hijab and burkini wearing model to walk on the runways. The 21 years old model from Kenya received nationwide attention after competing in the Miss Minnesota competition where she entered the semi-final.

Despite working in the fashion world, Halima is stick to her religious traits and traditions. Many of her followers curious about her love life. Find in detail about Halima including her career, net worth and relationship status below!

Before that, take a close look at her quick facts.

American fashion model Halima Aden was born on September 19, 1997, in Kenya at the Kakuma Refugee Camp. Halima was six when she moved to the United States and settled down in St. Cloud, Minnesota.

Halima mother raised her but nothing is known about her father. In addition, she has a younger brother, but his name is not mentioned anywhere.

Aden attended Apollo High School and later enrolled at St. Cloud State University. Before fame, she worked as a hospital aide to support her studies at the age of sixteen.

Halima Aden has an average height of 5 feet 5 inches and weighs around 50 Kg. Despite the average height, she has become a role model in the fashion industry, inspiring many young girls around the world.

She has glowing cocoa skin, dark brown eyes, and black hair. She wears a shoe size of 7.5 US and has a slim figure.

Halima Aden gained the attention after she competed in the Miss Minnesota USA pageant and was the first contestant to wear a burkini and a hijab in 2016. She was placed in the top 15 but could make it in the top 10.

Following the year, IMG Models Agency signed a three-year contract with Aden. In February 2017, Adem made her debut at the New York Fashion Week and eventually, served as a preliminary and telecast judge of the Miss USA 2017 pageant.

Over the years, Aden has walked on the runway for any designers such as Alberta Ferretti and Maxmara. Moreover, she posed British Glamour, American Eagle, and featured on the cover of CR Fashion Book. Additionally, Halima appeared on the cover of several famous magazines, including Vogue Arabia, British Vogue, and Allure.

Back in 2018, Aden became a UNICEF ambassador that focused on children’s rights. In April 2019, Halima Aden appeared in Sports Illustrated’s Swimsuit Issue and is the first model to wear the burkini and hijab.

This is not the first time in her career that she appeared wearing burkini and hijab in the fashion industry. Aden even shared a picture and video of herself on her Instagram, sending a message to her community and the world.

Don’t change yourself .. Change the GAME!! Ladies anything is possible!!! Being in Sports Illustrated is so much bigger than me. It’s sending a message to my community and the world that women of all different backgrounds, looks, upbringings… can stand together and be celebrated. Thank you so much @si_swimsuit & the entire team for giving me this incredible opportunity.

Net Worth and Income | How much does Halima Aden make?

Halima Aden earns an impressive amount of salary from her profession and endorsements. However, she hasn’t revealed the exact net worth or her annual income.

The youngest billionaire in the making: Kylie Jenner

Over the years, Aden has worked with many top brands such as Dolce & Gabbana, Calvin Klein, and so on. Other than that, Aden has designed her own clothing brand Turban and Shawl collection. During an interview with Teen Vogue, she said that her design is for everyone. Through all her exclusive tenures, she is living a lavish lifestyle.

The hijabi model is single as of now. No rumors regarding her relationship have been surfaced yet. Further, the model hasn’t disclosed any information relating to her family and private life.

At present, Aden is more focused on her career than searching for her perfect match.