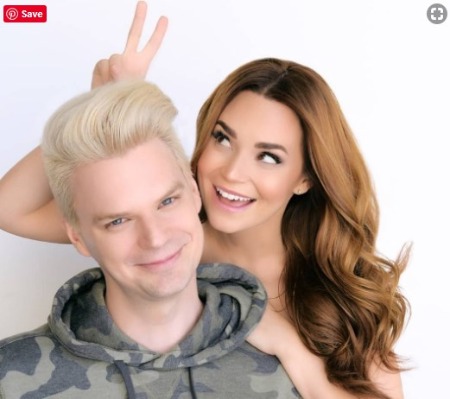 Nowadays many youngsters create their own materials and showing their talent through the YouTube platform and garnered both fame and fortune.

One of them is Mike Lamond aka Husky who starts his career as an e-sports commentator and also, accumulated a huge number of fan following on his Gaming channel but sadly he deleted all the videos from his YouTube.

His fans are curious to know what happened to their favorite StarCraft gamer and why he removed all the videos from his channel? Lamond is now working on his girlfriend’s channel as a manager.

Let’s find more about Mike Lamond. Stayed with us.

Who is Mike Lamond?

American YouTuber Mike Lamond was born as Michael D Lamond on May 4, 1987, in Basherfield, California and raised in Nipomo where he lived 11 years before moving to Gresham, Oregon with his family. He has an older brother.

Mike Lamond is the manager and director of Rosanna Pansino’s YouTube channel. In addition, he featured on her videos many times and even do challenges videos together.

In November 2018, Rosanna revealed that they are dating and living together for a long time. the couple met in 2010 and since then they are working together. However, nobody knows they began dating each other.

Rosanna Pansino: Who is She Dating Now? Know Her Height, Net Worth, Age, YouTube, & More >>

Mike and Rosanna both are the co-parents of their two dogs; blueberry and cookie. On his YouTube, Husky even featured his girlfriend and it seemed the couple has amazing chemistry between them.

Since early childhood, Mike Lamond aka Husky was an avid fan of video games and discover StarCraft, a real-time strategizing PC, and MAC video game. He spent most of his playing video games on Blizzard’s online.

Later, Mike started following the Korean channel GOM TV that broadcast StarCraft gameplay from professional gamers.   This inspired him to created a YouTube channel where he provided his own commentary on StarCraft: Brood War and started uploading more and more commentary videos on his channel.

At the point, Husky uploaded 100 videos per month and gained a massive number of a subscriber after he decided to exclusively commentary on StarCraft II: Wings of Liberty in 2010.

Then he collaborated with fellow commentator HD to hots the HDH Invitational a StarCraft II tournament. Even they participated in a newly launched YouTube channel titled The Game Station that present all the type of video games.

After gaining success, Husky moved to Los Angeles to pursue a full-time job at The Game Station. Moreover, he teamed up with TheWarpzone and Stage5TV to created a music video One More Fight which was the parody of Maroon 5’s One More Night.

After leaving e-sports, Husky started tweeting his favorite StarCraft game and keeping updates to his fan followers. Besides, Mike severed as a manager of his girlfriend Rosanna Pansino for a decade.

Mike earned a considerable amount of money as a StarCraft II Caster. The YouTuber has not disclosed his net worth and salary that paid by YouTube to him. According to Social Blade, Husky earns monthly between $345 – $5.5K and his estimated yearly income is around $4.1K – $66.2K.

New Video! Surprised my girlfriend @rosannapansino with a MASSIVE inflatable unicorn. Her reaction is amazing. ??❤️ Link to video in my bio.