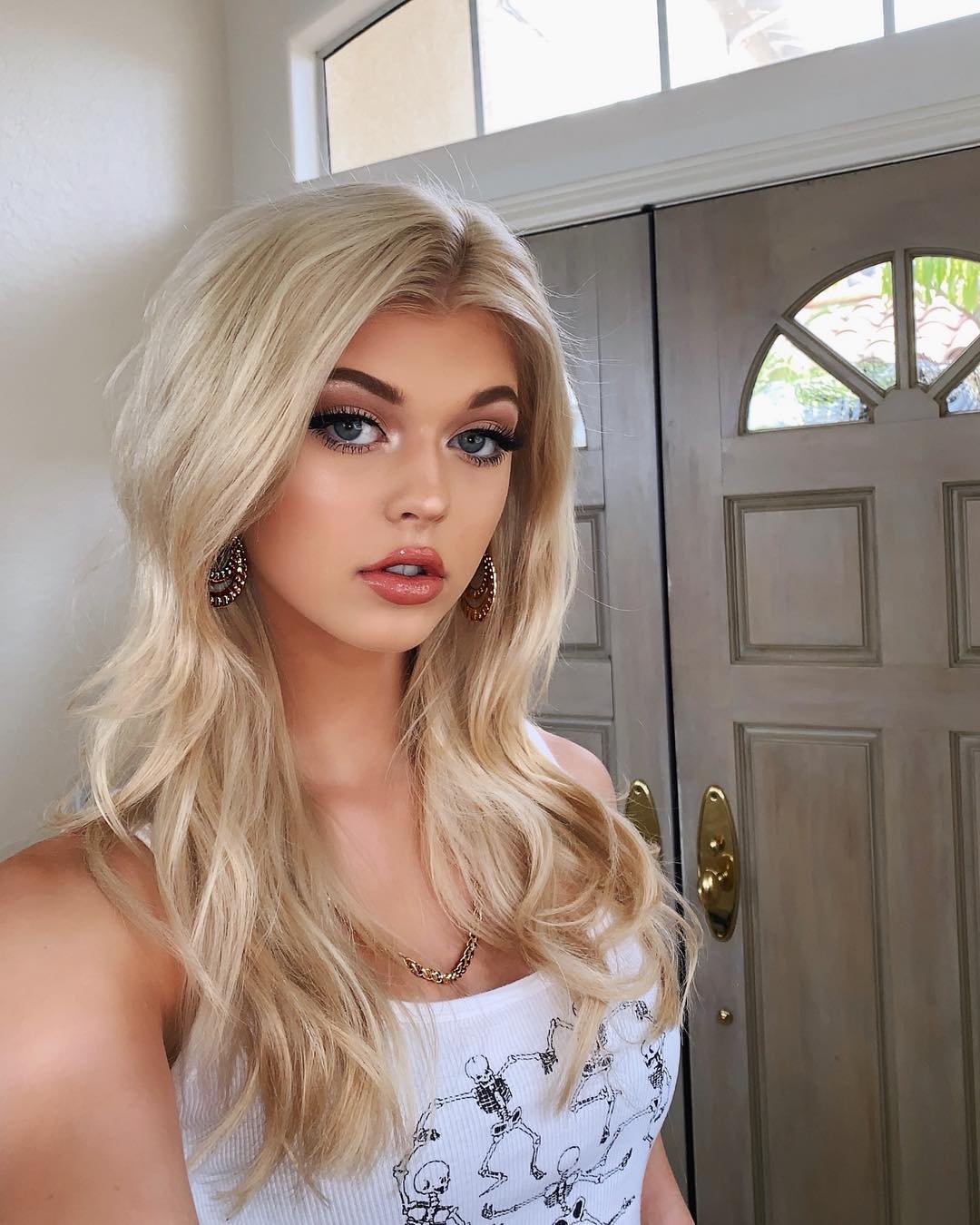 Loren Gray is one of the Tic Tok stars, who rose to fame through a lip-sync videos app Tik Tok and also known for her song on YouTube channel.

Being a social media star, she has grabbed million fan followers around the world. In fact, in an early age, she stole the limelight of media and became famous among her well-wishers.

So you wanna know more about the teenage star, Loren Gray age, let’s scroll below!

Loren Gray Beech was born on 19 April 2002 to American parent in Pennsylvania, USA. There no information regarding her parents but we do know that her parents got divorced.

After the divorce, she stayed with her mother, but she is in touch with her father too. Loren has a step-sister, Jordon and now her sister is eight years old. It is also said that the two sisters hardly keep in touch.

Her father runs an Instagram account called reallylorensdad. Loren loves animal very much.  In fact, she has two dogs: Agel Pom and Smudge Pom. She is homeschooled due to her busy schedule.

Loren Gray was one of the first teen stars who received an immense fan following on the online social platforms.  Besides musical.ly, she is an actress, musician, and dancer and has gained millions of fan followers across various platforms.

Loren is the most well known for her @lorengray musical.ly account where has over 33.1 million followers and 2 billion hearts.

Loren Gray Beech has attained huge following in other major social media platforms as well. However, Tik Tok(musical.ly) was not the first one she began with.

Her interest in music made her to creates an account on the Tik Tok(musical.ly) app. Then, the flood of interesting videos of her was left on her Tik Tok account which soon caught the attention of millions.

Loren Beech Gray aka Loren is popular on Instagram and YouTube where she has millions of fan following.  Loren has over 3.5 million subscribers on YouTube channel with more than 99 million views.

Loren is a singer and recently, on 15 November 2018, she released her song ‘Kick You Out‘ on YouTube. Within only four days, her video has received more than 1.6million views.

If you have not yet heard her, then go to Spotify, iTunes, Apple Music, Tidal and Google Play to have a taste of her music.

Gray released her first single ‘My Story‘ on her YouTube channel in August 2018 and garnered over a million views. In fact, a few months ago, she signed with Virgin Records.

Loren is also an Instagram star. Also, she has participated in Teen Vogue and Seventeen Magazine.  Moreover, the Young star received awards nomination at the People’s Choice Awards, Teen Awards, and the VMAs.

Apart from that, she is a model. Her keen sense of fashion and her confidant, yet elegant personal style has made her a rising figure on social media. Lorey has modelled for various brand’s clothes, bags, accessories, etc. Moreover, she has a similar kind of interest in travelling as well.

Loren is attractive, gorgeous and has the ability to reach out to viewers and an easy sociability. Her videos seem quite real. Besides, her channel, she has been featured on HRVY’s “Personal” music videos.

Another thing that kept her in the spotlight because of her past relationship with Juway Roman and Joel Kisluk.

Loren and Joey look cute together but unfortunately, the two broke up back in June 2016. The cute couple was liked by their fans and followers. Loren and Joel began dating in August 2015 and called them by their love name ‘Joren.’

The former couple took Twitter and Instagram page to announced their separation. Also revealed the reason behind their breakup that they wanted to focus on their career rather than love life.

After break up with Kisluk, gorgeous Loren started dating Puerto Rican web star, Juway Roman. She began dating Geo who is popularly known as Flamingeos or Juway Roman in 2016. Loren and Juway dated each other for few months and split in late 2016.

She confirmed her relationship with Geo via Instagram, stating ‘You’re beautiful to me’ one of the photos.

But alas! her second relationship also did not last long. She separated from Goe by November 2016. It is sad to say that they lasted only for two months.

Loren took to Twitter to declare their separation. She didn’t say much about their relationship at that time. She tweeted:

geo and I are no longer together. thank you guys for understanding x? sorry to anyone who is hurt by this but it's for the best. love you❤️

After a few days, Loren decided to go live with a broadcast on her YouNow and also explained the frightening reason why she ended the relationship.

Loren revealed the reason for their split on the very day. She told fans that Juway was controlling her life, commanding her what to wear. And that was the moment she decided to break up with him.

The reason for Gray to declare it publicly was not to get blamed for their breakup. And she was out of such disrespectful relationship. Moreover, she told fans to be wary of such relations and to avoid them.

If I ‘m not wrong, I guess you might want to know about her current relationship status. As of now, she is single.

Most of her fans are found curious about “whether she is dating HRVY?” To answer them, she is not dating HRVY.  In one of her videos, she said that she and HRVY are just a good friend.

Besides Tik Tok, she makes additional money from endorsement deals and modelling. However, she hasn’t revealed her actual salary yet.

She has promoted some brand through her Instagram like House of Herrera at New York Fashion Week, BCBGeneration on the red carpet for CMA Awards, November 2016 and Marc Jacobs outfit, Yves Saint Laurent shoes, and Spinelli Kilcollin jewellery at the orange carpet for Kids Choice Awards, 2017.

Being a Tik Tok star, she has an active presence on various social media platforms.

Take a look at these facts you didn’t know about this Tik Tok star and singer.

If you enjoyed reading this article, then do like, comment and share this article with your friends. Every day, we come with more interesting articles on your favourite celebrities. To know more keep following Celeb Tattler.