Home » Biography » Lizzy Musi: Who Is Her Boyfriend? Know Her Age, Net Worth, Father, Wiki-Facts

Lizzy Musi: Who Is Her Boyfriend? Know Her Age, Net Worth, Father, Wiki-Facts 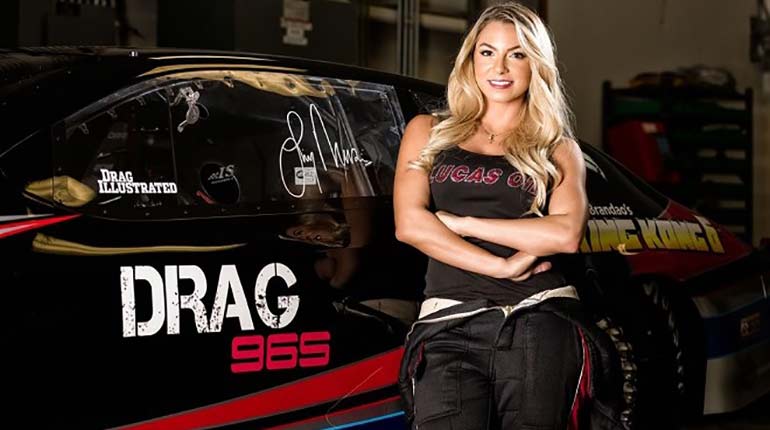 Woman are extraordinary and handle any difficult situation very smoothly. Similarly, Lizzy Musi is a second generation professional car racer who sets the bar out of the society boundary and became an inspiration for women.

Lizzy has set several records and also won races at a young age. If you are a fan of the reality show ‘Street Outlaws’then you are definitely familiar with the car race Kye Kelley whom Musi is currently in a relationship and even competed together in some races. Their fans have been searching on the internet to find more about their romance.

Stay tuned with us to know everything about Lizzy Musi.

If you have a question about her relationship status like she is married or not then the answer is no. If she is not married then she would be probably single but she is not. As of now, she is dating the Street Outlaws Kye Kelly who was previously married to his ex-wife, Alisa Mote.

Kye Kelley got married to Alisa after dating for a quite a long time and had a daughter named Kenadeigh Alexa Kelley and also a father another child, Haleigh from a previous relationship with a woman named Sarah.

Following his divorce, there was a rumor of a romance between Lizzy and Kye in race track too. But neither of them confirmed or denied their relationship to the public. After a month of speculation, her boyfriend, Kelley made their relationship official via Facebook that they were dating in 2017.

When her boyfriend, Kelley went on undergone surgery for a herniated disc, she requested her followers to pray for his recovery on Instagram. If we talked further about Lizzy and Kye relationship, the two are enjoying their love life and are serious for each other and their future.

The couple has competed in several car racing and even won some races too. She didn’t shy to flaunt her romance with Kye and shares lots of pictures on her social media. Though they have not shared their marriage plan yet. Hope, we soon hear the wedding bells of them.

Lizzy followed her father footstep and joined the world of drag racing to become a professional drag race and also worked as an engine mechanic. After her entry into racing, soon she was a rising star of the sport.

Lizzy Musi won her career-first National level Pro Nitrous at the PDRA at Virginia Motorsports Park in Dinwiddie, VA. In 2014’s PDRA, she became the first woman to break 200 MPH in eighth-mile Pro Mod racing. The same year, she was titled of PDRA Rookie of the Year 2014 and featured on the cover of Drag illustrated Hottest Issue.

In 2015, Lizzy introduced to his new Dodge Dart aka King King 6 in Pro Nitrous and won the second national event in Pro Nitrous with a record-breaking run of 3.79 seconds at 200.48 MPH.

Second-generation racer Lizzy Musi was injured in third around qualification of American Drag Racing League at Bristol Dragway in 2012. At the time, she was driving the 1968 Camaro which went out of control and crashed. In the first year racing, she had a fairly impressive start for an n00b drag race, run of 4.34 seconds 170 MPH 1/8 mile run. Fortunately, Lizzy came out of the car on her own and suffered no injury at all. Watch the video below.

After that, again she faced another accident in the opening of Pro Nitrous at the Texas Motorplex outside Dallas.

The drag racer earns quite an impressive wealth from her professional career and has been racing for several years. Apart from that, she also looks at her father’s shop and has her own official website where you can visit and know more about her including races, sponsors, pictures.

Lizzy Musi was born on 1st January 1991 in the family of racers, making her 28 years old now and raised along with her sister in New Jersey. Since her childhood, she loved to play with car

toys to getting involved with the real thing in the race track.

Lizzy began racing at the age of 8 and participated in the junior dragster and decided to make her career in the racing. She competed in Junior Drag at the age of 16.

Moving on to her education, Lizzy studied Carteret High School. After high school, she worked in her father’s shop and gained knowledge of motor parts and late she got a mentor of her father. Musi to Mooresville, N.C in late 2012 at the age 22 relocated with his father from New Jersey to North Carolina.

The young and beautiful drag racer gained popularity from the social media where she has a large number of followers and keeps posting pictures and videos of her races and engine work on Instagram, Twitter, and Facebook.

She was ranked in Drag Illustrated’ 30 under 30 lists along with Brittany Force who is one of the stars of Driving Force.

Getting ready to bring this beast back out again! Leaving to head south tonight before the snow comes. We will be at Orlando Speed World this weekend! If you are in the area come on out! #orlando #promod #backintheseat #timetodowork @raceosw