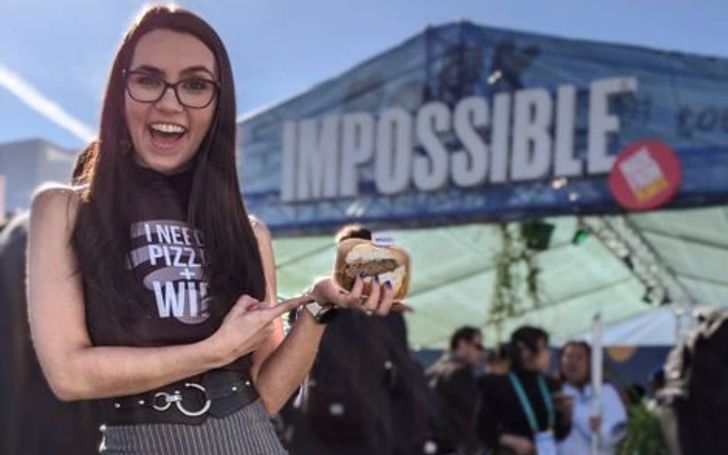 There are not many people who are so sure about their future and career that they want to pursue. But the case is not the same with Trisha Hershberger, who knew what she wanted and started her career in entertainment at the age of five.

Right now, Hershberger is a successful and established American actress, model, entertainer, and host. She is best known as a host for channel SourceFed and its sister channel SourceFedNERDS. Bet you guys are excited to know more about this versatile host. Without any further ado, let’s jump on it, shall we?

Here are some facts before we start the article.

How Old Is Trisha Hershberger?- Age, Height, and Measurements

The self-made star and the most sought out host, Trisha is the beautiful woman who is just 37 years old. Hershberger was born on September 15, 1982, while her birth sign is Virgo. Not to mention, she has retained her youthfulness despite being in her late 30s already.

Similarly, the American born Trisha is not so tall and stands at just 5 feet 1 inch(157 cm). Also, her weight and other measurements are unknown at the moment. But there is no denying that Hershberger has got a body to die for.

Moreover, the young host knows how to accentuates her curvy body with body-hugging dresses and patterns. Even without that, this brunette and the brown-eyed damsel is a beaut.

Born and raised in the city of Schwenksville, Pennsylvania, the United States of America, Trisha is American by nationality. Though the general media still uncover her ethnicity.

Likewise, the information on her parents and siblings are also nowhere to be found. But sources claim that her folks were creative people that inspired her to enter the entertainment world at the tender age of five.

For the starters, Hershberger began participating in small community and theatre productions. With that in mind, the young Trisha then enrolled in DeSales University with a full scholarship and completed her Bachelor’s degree in Theatre of Arts and Theology.

As mentioned above, Trisha, from an early age, knew what she wanted to be. Vying to work in the entertainment world, Hershberger spends her college time doing commercials. Not to mention, the young diva also did her internship at the Pennsylvania Shakespeare Festival.

Likewise, the brilliant Trisha won the 2002 Miss Pennsylvania American Co-Ed competition and was even honored as a State Champion Public Speaker.

To pursue her career in entertainment, Trisha even moved to Los Angeles and appeared on various YouTube channels. Initially, she started in the channels Rhett and Link, TheFineBros, Tekzilla, and others.

Then on August 17, 2010, Trisha created her self titled YouTube channel, which now has over 145k subscribers and more than 14 million views. Then in May 2013, the beautiful host moved to SourceFedNERD as a primary host of the spin-off YouTube channel.

Similarly, in 2015, Hershberger launched her own digital production company called FunSizedVids that specializes in producing short media content for The Escapist. In addition to her YouTube channel, Hershberger has a Twitch channel.

Talking about her own life, Trisha is a married woman as of now. Just like her professional career, Hershberger’s married life is also a success. Many might not know this, but the American host is married to her boyfriend turned husband, Nate Parker.

Likewise, the lovely couple tied the knot in the year 2015, and her close friends and family attended the wedding. On October 22, 2019, she retweeted on a post of Nate and wished him their fourth marriage anniversary. She captioned the wedding picture saying,

“Happy 4-year anniversary baby! Together, we celebrate another year of you putting up with me! Sometimes you just gotta find your person and I’m so so lucky to have found mine xo.”

It's amazing how one day, someone walks into your life and you can't imagine how you ever lived without them ❤️ Happy 4 year anniversary baby! You might call me crazy, but I'm not the one who married me ? #iloveyou3000 #comewhatmay #happyanniversary

From their union, the couple now has a child, a son named Logan Parker, who was born in 2017. The star often posts adorable pictures and videos of her son, and it seems we can not get enough of it.

Net Worth and Income: How Much Does Trisha Earn?

Trisha is a versatile person who is engaged in a various profession that is successful too. She is active as a host, actress, writer, and a YouTuber. As of 2020, this energetic personality has an estimated net worth of $1 million.

According to SocialBlade.com, the active YouTuber makes around $26 to $416 monthly and $312 to $5k annually from her channel alone.

Other than this, Trisha has also appeared in numerous commercials and has promoted brands like Gamestop and Fandango. No doubt that the 37-year-old media personality gets enough from those sources too.