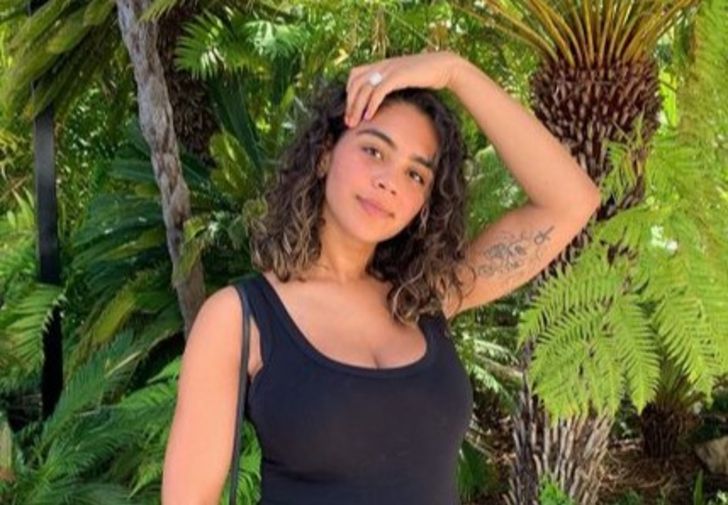 One day you will be proud of yourself for not giving up what you really want to do for a long time. Similarly, American Instagram star Taylor Giavasis is one of that internet personality who’s inspired people to believe in themselves not what others say.

Besides, Giavasis is widely known as the daughter of actress and entrepreneur, Nikki Giavasis. But do you know, Taylor is becoming a mom very soon?  Let’s dig out everything about Giavasis, including her personal life.

Who is Taylor Giavasis Fiance, Nash Grier? Are they Engaged?

The social media influencer Taylor Giavasis is engaged to her long-term boyfriend, Nash Grier, a YouTuber in 2019. Nash shared a sweet proposal clip in the earlier on his social profile with a caption and got congratulations online from their fans and celeb pals.

Before their engagement, Taylor and Nash dated almost four years, and since 2015, they are living together. The duo first met in Paris, France, when she was 17.

Further, Taylor and Nash went on a vacation where their goofy photographs were led out by paparazzi. In 2016, the couple attended Teen Choice Awards in Inglewood, California.

Nash Grier: Is He Engaged to Taylor Giavasis? Know His Age, Net Worth, Merch, Bio >>

Grasvasis is very supportive of her fiance and helps to make his career whatever the situation was. As of now, Taylor and Nash have not planned to get married soon.

Taylor Gravasis is Ready To Be a Mom

Well, Taylor Giavasis will become a loving mother ver soon. Giavasis took her Instagram to announced the news that she was pregnant showing her baby bump that read,

“As long as I can remember, I’ve wanted to be a mommy. I’ve always been enthralled with pregnancy and the joy/strength that come with motherhood. I am honored to be able to experience such a gift. The love and support Nash and I have received has made us feel like the luckiest people on earth. We look forward to the future and sharing the rest of our journey.”

The 21 years old social influencer doesn’t shy to shows her baby bump on the social media and enjoying every single moment of it. Recently, she posted a naked picture of herself on her Instagram, that reads,

“pregnancy is a wild journey, but I wouldn’t trade anything to grow with you.”

We are eagerly waiting to see the little angel, and to their loving fans, we shall update as soon as we hear the good news.

Taylor Gravasis is a social media personality. She started using the social media app Instagram through which she inspired people to accept themselves and respect their own body.

Subsequently, she started posting explicit images of her body on social media. Taylor told other ladies not to hate their bodies, saying everyone is beautiful in their own way.

Shannon Ihrke is Ready To Be Mom! Who is her Husband? Is she Married? >>

Back in 2015, Taylor launched her own website called ‘The Naked Diaries‘ that inspired ladies from all over the world to post pictures alongside their stories.

Moreover, Gravasis is a pet lover. She has maintained a separated social page for her pets, which has over 9k followers.

Taylor also maintains an Instagram page, where others can post their own images. This page has gathered more than 158,000 followers.

Taylor Giavasis has an estimated net worth of $500,000. She generates a good amount of salary from her different sources like endorsements and brand promotions.

On the other hand, her fiance net worth is $3 million. Giavasis makes $1,920.75 – $3,201.25 as per Instagram post that added to her net worth. Through her social media, she promotes brands like Balkan, Andi, Bagus, Pretty Litte Thing, and so on.

Taylor has become a star across all over the social media platforms such as Twitter, Instagram, and Facebook. She posts inspirational quotes and pictures on her Twitter accounts, whereas, on Instagram, she has more than 642k followers and posts images and videos.