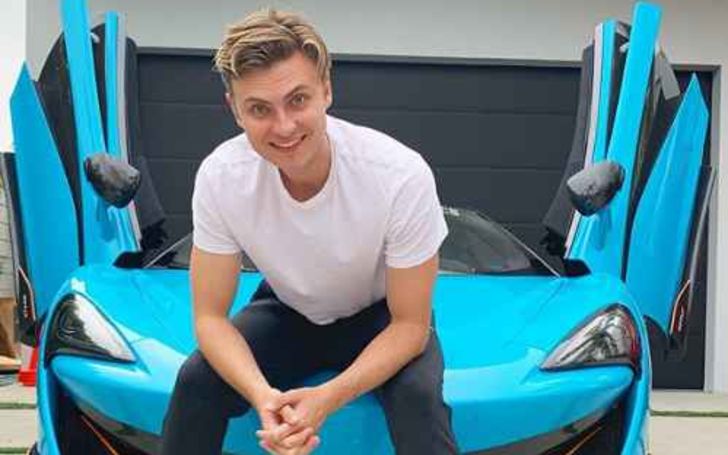 With over 6 million YouTube subscribers and 570k on Instagram, Carter Sharer is not a new name on the web. If you still have no idea, then let us tell you, Carter is a known DIY and video make on YouTube.

Born and raised in America, Carter’s video content ranges from science and technology to adventure and general themes. Today we will look deep into his life, including his love life, income, and so on. Stick with us.

Here are some facts first.

Carter is a known name on the YouTube platform. So, how did the name become synonymous with the largest sharing media platform? Well, it all began after the sharer created his first YouTube account on September 24, 2009.

Likewise, Sharer introduced himself to the mass with his first vlog that was followed by a science experiment video ‘Ninja Weapons Soda Drop Test.’ The videos were hit, and soon Carter rose to popularity.

Moreover, Sharer reached a new height after the video ‘RC Car Drives on Pool’ came out. Posted on December 21, 2017, the young YouTuber is seen driving his RC car into the pool. Surprisingly, the video was a massive hit among the fandom and attracted millions of views to his channel.

As of now, Carter’s YouTube channel has gained 6.17 million subscribers and more than 1 billion views in total.

Net Worth and Income- How Much Is Carter Sharer Worth?

YouTube has become a global platform for young minds to pursue a successful career with a stable income. Don’t doubt it; just look at Carter Sharer. As of now, this star YouTuber has an estimated net worth of $2.6 million.

Along with that, Sharer makes enough from his YouTube channel as well. According to SocialBlade.com, Carter’s channel is ranked 485th in the states alone. His channel brings in the monthly income around $11.6k to $185.6k and a yearly salary of $139.2k to $2.2 million to the young star.

Aside from his own YouTube channel, Carter is also a part of Team RAR. The team name ‘RAR’ was inspired by the Latin term “rara avis,” a rare bird, ‘one of a kind person that stands against the grain.’

Moreover, the name ‘RAR’ also doubles as an acronym for ‘Rare And Ridiculous.’ Along with Carter, the team is a collaborative production that includes other YouTubers like Lizzy Capri, Stove Cho, Ryan Prunty, and Milli Capri.

You can check out Team RAR’s stuff right here. Their merchandise consists of hoodies, shirts, T-shirts, stickers, caps, and many others. The prices are affordable as well.

Now that we have talked about his professional career let’s take a peek at his own life as well. Talking about it, Carter used to date fellow YouTuber Lizzy Sharer aka Elizabeth Chang, until 2019.

Lizzy, who is also a YouTuber, is known for posting fun vlogs like DIYs, experiments, outdoor activities, and many life hack stuff. However, the news came as a shock since both of them were known to be very close to each other. You can watch where they talk about their breakups.

Similarly, both of them appeared in each other videos. Just back in 2018, Lizzy posted a video showing how Sharer proposed to her. But as they say, every fairytale must come to an end.

However, even after their break up, the two have kept supporting each other. Even now, Carter makes videos with his ex-girlfriend.

Born and raised in the city of Virginia, the United States of America, Carter is very secretive about his personal life. In fact, he has not mentioned much when it comes to his parents and siblings.

But some sources claim that Sharer has a brother named Stephen and a sister named Grace. Nonetheless, this young YouTuber is close with his family members and makes sure to spend time with them.

As for his education, Sharer graduated from Oakton High School in 2012 and then acquired his bachelor’s degree from Carnegie Mellon University.

Likewise, the 27-year-old Sharer is an American who belongs to a mixed ethnic background.

Age and Height: How Old Is Carter Sharer?

Carter Sharer, a known YouTuber is currently 27 years old. He was born on October 23, 1993, under the star sign, Scorpio.

Likewise, the handsome Carter stands tall at the height of 5 feet 10 inches(178 cm). But Sharer has not disclosed much about his other measurements, including the weight.

However, Sharer has often mentioned how great his body is to him. Hence, it has led the young YouTuber to hit the gym regularly. Along with his chiseled body, Carter has got short blonde hair and brown eyes.