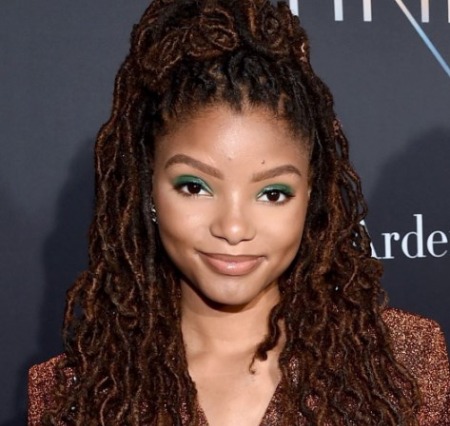 Some of you may not be familiar with the rising star Halle Bailey, who has established herself in the Hollywood industry such a young age.

Halle Bailey is an American musician and actress, who is one half of the musical duo ‘Chloe X Halle.’ Her YouTube channel has amassed over 1 million subscribers and 105 million views. Recently, Bailey tweeted that she will be cast as Ariel in the live-action of “The Little Mermaid” which is expected to begin in 2020.

Here is everything you need to know about the actress-musician Halle, including her personal life and career.

American singer and actress Halle Bailey is from Atlanta, Georgia, born on March 27, 2000, and later relocated to Los Angeles, California with her family. Halle is the youngest daughter of Courtney and Doug Bailey. Her mother worked as an HR recruiter for Twitter, and father left his stockbroker job to worked as a full-time manager to his daughter Halle.

She has an older sister named Chloe Bailey, who is famous as her and helps her in making YouTube videos. Also, Bailey has a younger brother, Branson, born in 2005.

Concerning about her education, Halle studied in a public school in Georgia before switching to homeschooling. She graduated from high school in 2018.

In the early teens, both Halle and Chloe Bailey became a sister duo, started their music career by singing many covers of pop songs on YouTube. They released their first EP titled Uncovered via YouTube in 2013.

The same year, he uploaded a cover of Beyoncé’s Pretty Hurts which went viral all over the social Immediately signed to Parkwood Entertainment record label.

After that, she alongside her sister released their debut album The Kids Are Alright through the Parkwood and Columbia imprint on March 2018 including Happy Without Me.

Not only that, Halle and Chloe’s songs put out for their growing number of fans. Moreover, Halle and her sister appeared in the visual album Beyonce Knowles Carter for the songs All Night along with Zendaya and Amandla Stenberg.

Besides, they went on to the opening act alongside DJ Khaled of the US leg of Beyonce and Jay-Z’s world tour, On The Run II Tour in 2018.

Aaron Carpenter: Is He In a Relationship With Connar Franklin? Know More About Him

Apart from that, Halle and Chole Bailey starred in many televisions and movies. Halle and her sister played on the hit TV series Grown-ish, on which their song The Kids Are Alright was used in the first episode.

Just Announced: Halle Bailey has been cast in the upcoming live-action reimagining of The Little Mermaid.

How Much is Halle Bailey Net Worth?

Multi-talented Halle earns quite a hefty amount at a young age. Bailey has a net worth of approximately $2 million, as of 2019. Although this is just the beginning of her life and there are more to do in the upcoming days and makes more money than now soon.

Additionally, Halle also walked on the runway for ‘Dolce & Gabbana’ and ‘Rodarte’ along with her sister Chloe.

What do you think? The Little Mermaid does have a boyfriend or not?

Hold on, Halle is single and has not seen with any guy yet. As of now, Halle is focusing on her career rather than getting involved in the relationship. Hope, she will find her perfect match very soon.

Is HallyBailey on Social Media?