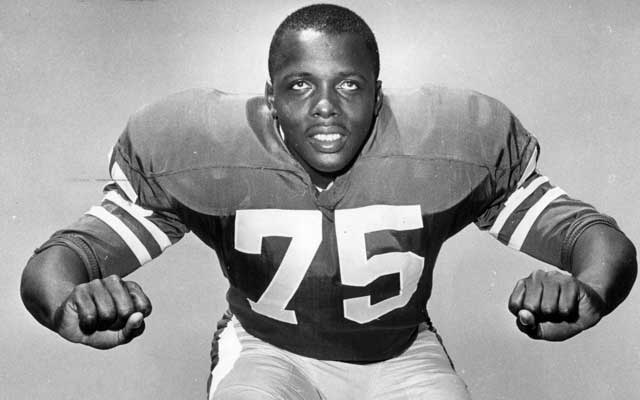 If you know, football is one of the most famous sports in America, if not the most. And National Football League (NFL) is the organization that is responsible for American professional football. And to talk about American football history, Deacon Jones is the legendary NFL player who can’t go missing. He is the rarest talents the American Sports has ever found. Deacon Jones is a superstar of NFL from the sixties.

Jones, who had had an obscure college career preceding his 14th-round selection by the Los Angeles Rams in the 1961 draft, quickly blossomed into a superb defensive end. Blessed with speed, agility, and quickness, the “Deacon” became one of the most exceptional pass rushers in the business.

Yet it was the chance observation of two Rams scouts viewing films of an opponent; he might never have had a chance to play pro football. When the scouts noted that the 6-4, 272-pound tackle was outrunning the backs they were scouting, they recommended Jones as a sleeper pick.

You are about to find out, Deacon Jones life events, setback, success, and everything here at one place.

David “Deacon” Jones is an NFL player and an American football Hall of Famer. Deacon represented the Los Angeles Rams’ as one of four “Fearsome Foursome” in the defense line During the 1960s.

Besides, Deacon Jones pursued a career in acting.

David “Deacon” Jones/ David D. Jones was born in Eatonville, Florida born on December 9, 1938. His parent sold barbecue in a stand for their livelihood.

After high school in 1958, he received a football scholarship at South Carolina State University. Simultaneously, he was an active participant in the burgeoning civil-rights movement.

And for the same reason, his scholarship was officially canceled. But his coach being generous offered him a new award at Mississippi Vocational College. And Deacon transferred there in 1960.

Even at Mississippi Vocational College, Deacon was a victim of blatant racism. He and his teammates were refused to share the facilitated housing in many events, so they would have to spend such days in the gym.

In 1961, Deacon and his three teammates Merlin Olsen, Lamar Lundy, and Rosey Grier were drafted by the Los Angeles Rams.

However, the 1971 season has to be the worst year in his career as a football player. The year he sprained an arch due to which he missed many games.

It was the moment when he dealt the lowest career average of all time. Eventually, in 1972, he was traded to the San Diego Chargers. Then, his career graph inclined back to his prime.

Shortly becoming, the team’s defensive captain and the four times Associated Press NFL Defensive Player of the Week. Many believe Deacon Jones is a player to revolutionized the defensive tactics.

He invented the technique called ‘sacking’ where the other player loses his focus for a few seconds giving time to get ahead although the method was considered illegal later by the NFL.

But still, when it comes to diverting the focus in football, Deacon Jones is referred to as the master of all sackers.

The remarkable Deacon Jones football career came to an end after retiring in 1974. Washington Redskins was the last team he represented. He has played 14 seasons in the NFL.

Beside his NFL career Deacon was growing his profession in acting. Instantly, Deacon was seen being an actor appearing in many several TV shows and commercials like Jack & the Beanstalk; Heaven Can Wait, Bewitched, The Brady Bunch and Wonder Woman.

Meanwhile, he worked as a radio analyst. Some of the companies Deacon worked with are the Miller Brewing Company, Pacific Coast Medical Enterprises, AstraZeneca Pharmaceuticals (Chairman), Haggar Clothing, and Epson America.

Deacon equally involved himself in community services. And, was chosen in Pro Football Hall of Fame in 1980.

However, very few know “Deacon” actually is not his real name. His name is David Jones. Later, he added Deacon to his name, as he found it very common.

Nevertheless, the legend passed away at the age of 74 on June 3, 2013. Moreover, Deacon Jones found a non-profit organization called “Deacon Jones Foundation.”

Furthermore, after Deacon’s death, his wife worked as the COO (Chief Operating Officer) and CFO (Chief Financial Officer) in the Foundation.

“Coming from a poor, inner-city neighborhood myself, I have an intimate knowledge of all of the problems people face there. It’s not just the inability to afford a good education that is a problem. Inner-city kids have to be prepared for college in every sense. For instance, kids from Beverly Hills grow up hearing about the stock market and real estate deals over the dinner table. When kids from the ghetto enter college and the workplace, they don’t know a thing about what they hear. And they are never told exactly what their commitment to their own neighborhoods must be.” — Deacon Jones