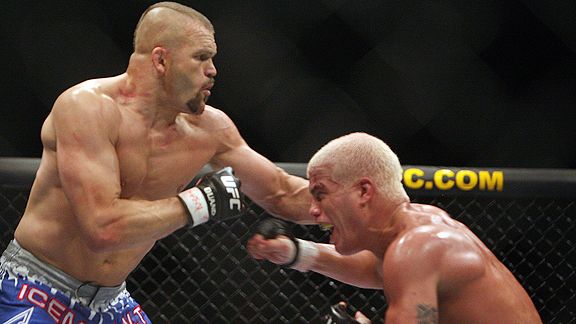 Not being able to walk away from a sport that brought you, your fame and fortune, that gave you your sense of identity, your sense of purpose, and in many respects, the passion that helped define you as a person during some of the most formative years of your life,  Chuck Liddell AKA. ‘The Iceman’.

He was the Light Heavyweight champion of the world, a pioneer for MMA’s first real foray into the mainstream and one of the main beams in the house that Dana built; the $4.2 billion mansions that we see the UFC as today.

But after 12 years of service and 23 fights with the promotion, he was told by the UFC in 2010 that his services were no longer required. That it was time to hang up his gloves.

It was a good fight with Franklin but when the former UFC Middleweight champion corked Liddell with a right hook he dropped him to the canvas and his career went with him. Or at least that’s what we thought.

You may also like French Montana: Net Worth & Bio. How much money he makes?

Let’s know some more details about Liddell’s search for stardom below.

Charles David “Chuck” Liddell is an American mixed martial artist. Chuck was born on December 17, 1969, in Santa Barbara, California. He is of Irish descent and started to learn boxing at the tender age of 12.

Chuck With His Family

Chuck With His Wife, Heidi Northcott.

Chuck attended San Marcos High school and was a starter on the football team for four years. He was often involved in fights with drunken college students.

His mother was a bookkeeper whom Chuck helped during working in homes. He then later graduated with a Bachelors of Arts in Accounting in 1995.

Liddell made his UFC debut in 1998 with a decision victory over Noe Hernandez. Chuck is very good at Koei-Kan Karate, American Kenpo, Kickboxing and Brazilian jiu-jitsu.

Liddell enjoyed early and conspicuous success in UFC with his quickness, power, and number of victories through knockouts.

With consecutive victories, Liddell was favorite to land UFC Light Heavyweight Championship. He was the face of UFC and helped the sport to attract massive attention and popularity throughout the world. Liddell is famous for bringing MMA into the mainstream of American sports and entertainment.

Chuck claimed UFC Light Heavyweight Championship on April 2004 after knocking out Tito Ortiz to claim a TKO victory. Liddell defended his title four times and lost his title to Quinton Jackson in his fifth defense. He suffered consecutive losses and retired at 2010.

Liddell was included into UFC Hall of Fame on July 10, 2009, at the UFC 100 Fan Expo in Las Vagas. With the consideration of Dana White, his family, and friends, Liddell retired from wrestling on December 29, 2010, after losing three consecutive fights with a knockout.

Liddell holds the world record in amateur kickboxing of 20 wins with only two losses. Among the 20 wins, he won 16 of them by knockout victories.

Chuck wrestled in 26 matches in his UFC career and lost only seven of these matches. Of the seven loss, five came in the last six games. Liddell is hinting a return from retirement in the recent months.

Chuck is 49 years old and stands at 5 feet 2 inches. He weighs approximately 93 kilos and falls under white ethnicity. His eye color is sky blue, and his hair color is light brown. His zodiac sign is Sagittarius. He is American and follows Christianity.

Net Worth Of Chuck Liddell

Liddell is one of the most successful MMA wrestlers of his time. He was one of the highest-earning athletes of UFC. Chuck is four-time Light Heavyweight Champion in UFC.

He earned $4.3 million during his fighting days. After retirement, he coached in the inaugural season of UFC and also appeared on “Dancing with the Stars” as a side source of income.

Chuck Liddell net worth is around $14 million.

Chuck currently earns $4 million a year through numerous streams, advertisements, and endorsements. His involvement in different streams and his possible comeback can increase his net value shortly.

Chuck was involved with numerous beautiful women in his dazzling career. Before his marriage, Chuck engaged to Erin Wilson from 2008-2009. Chuck also dated Juliette Lewis from 2004 to 2006.

There were reports of Liddell dating Jayden James and Maria Venus. The UFC star has a child with his ex-girlfriend Casey Noland, daughter Trista Liddell.

Chuck fishing with his children

Fishing with the kids Charlie caught his first fish

Chuck is now a family guy. His current spouse is Heidi Northcott whom he proposed back in 2010. He has two children with Heidi, a girl Guinevere in 2011 and a son, Charles David Liddell Jr.

The primary income of Liddell was from his fights. His first fight earned him $1000 only.

Winning this contest propelled him to popularity. Due to this popularity and fight against Tito Ortiz and Randy Couture, Liddell’s earnings from his fights have increased.

Another source of income is featuring in movies. Liddell has starred in several film example The Prison Riot along Dolph Lundgren.

Chuck Liddell has also featured in a dozen television shows, mostly as himself.

At the end of his career, he was paid $5000000 per fight, win or lose. Liddell has sponsorships, book sales, and other endeavors help to pad his income.

However, Chuck Liddell owns a house of $1.3 million.

Besides this house, he owns other expensive homes.

The first car he purchased was the 1988 Ford Ranger. At some point, Liddell owned a 2005 Hammer H2. Liddell sales books which also and scholarship.