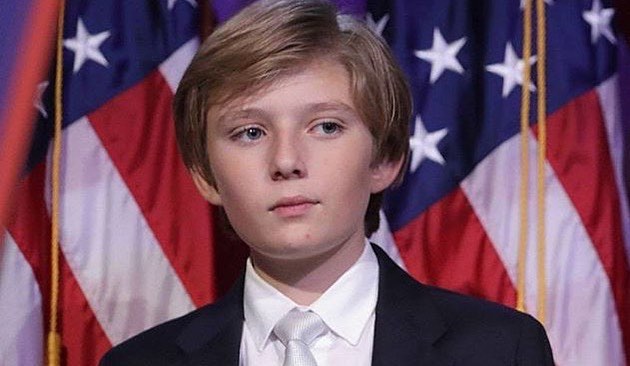 Born with a silver spoon, Barron Trump, who loves to play golf like his father, Donald Trump. Barron is the only child of the U.S. President, Donald Trump, and Melania Trump, First Lady.

Here are a few things you may not have known about the youngest Trump.

Who is Barron Trump?

Barron William Trump is the youngest son of the US President, Donald Trump and only child with Melania Trump, born on 20 March 2006. He is of German and Scottish descent on his father’s side and his mother is Slovenian.

Barron studied at the Columbia Grammar & Preparatory School in Manhattan but after moving to White House, he is attending St. Andrew’s in Potomac, Maryland. This school has small sizes class that has an average between 11 to 15 students; the institution yearly cost $40k.

He is fluent in both English and Slovenian languages, thanks to his Slovenian mother, Melania and is also learning French.

Barron and his mom moved into the White House on 11 June 2017. Prior to, his father lived at Trump Tower for the first five months of Trump’s presidency. Barron stays out from the limelight most of the time and back in April, he made his appearance at the Annual White House Egg Roll.

He hung up with his parents and watched his younger niece and nephew race off to hunt for eggs. Barron supported his father’s pardoning of the turkeys before Thanksgiving.

Later he was seen with his mom on the North Portico to receive the Christmas tree from Wisconsin which displays in the White House’s Blue Room.

Barron Trump has two half-brothers; Donald Jr. and Eric and two older half-sisters named Ivanka and Tiffany. He and his four-half sibling all attended in their father’s 2016 presidential campaign. Also, he has nine nephews and nieces of almost the same age as him.

In 2017, Barron’s family spent their Christmas holidays together at Trump’s Plam Beach Florida estates Mar-a-Lago. In 2018, the son of Donald, Barron invited to the football legend, Rooney Wanye and his wife Coolen in the Christmas party.

Barron was seen posing with Rooney who is a huge fan of the football legend. The party was also attended by Ivanka and Vanessa Trump.

What is Barron Trump’s Height?

If you want to know his height; watch him stand next to his parents then you will know. Barron Trump is quite tall. His actual height isn’t available in any sites yet but recent photos show he is few inches shorter than his father 6 ft 2 while his mother stands 5 ft 11 in tall.

It may be safe to say that he is as tall as his mom, Melania, who is never without her heels.

He is also known by his nickname, Little Donald. His mother, Melania told Parenting,

“He is a mixture of us in looks, but his personality is why I call him little Donald. He is a very strong-minded, very special, smart boy. He is independent and opinionated and knows exactly what he wants.”