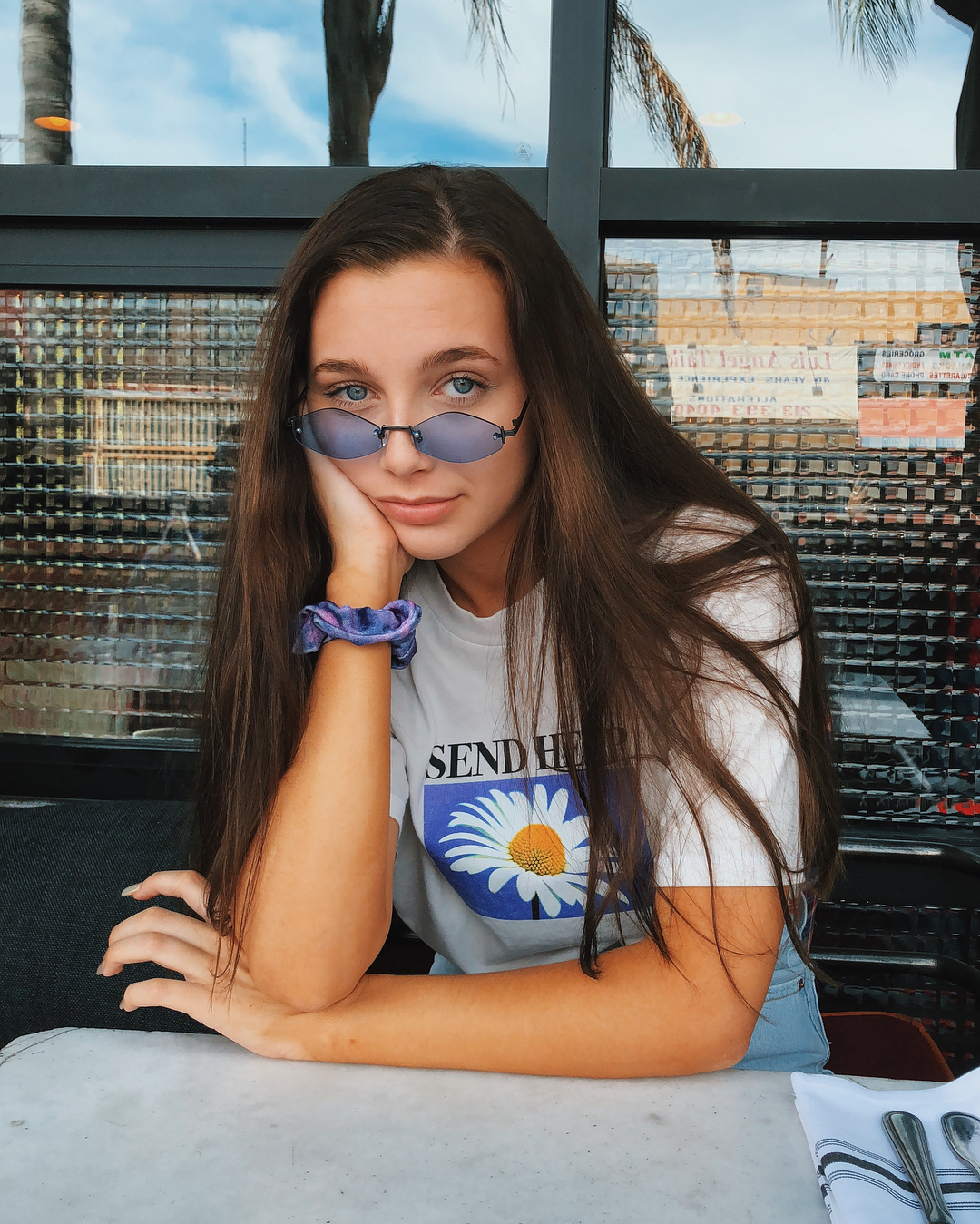 School can be quite boring, especially if you are not a big academic fan. But before quitting, any smart person always has a backup plan for survival, Emma Chamberlain seems to have had it all planned out before her life-changing decision.

Emma is a young American YouTube star who has managed to secure her place as one of the most successful upcoming YouTubers. She quit from school after feeling the school environment tedious and exhausting.

But despite that, she has managed to achieve more than her former classmates might succeed in their entire lives. Chamberlain now runs her successful YouTube Channel with over 5 million subscribers.

Emma Francis Chamberlain was born on May 23, 2001, in California, United States of America. Her father, Michael Chamberlian is an oil painter. She is American and belongs to white ethnicity. Currently, she resides in San Carlos with her family.

Emma attended ‘Notre Dame High School’ in Belmont. While she was at school, she participated in sports and athletic program. Her favorite subject is biology.

Later Emma left the school as she does not gel with its environment and she had a problem in making friends. At a young age, she learned to play the cello.

Emma Chamberlian began her career as a YouTuber in June 2016 and did not start uploading her video content until 2017. She uploaded her first video titled “City inspired summer lookbook 2017” on her self-tittle channel named ‘Emma Chamberlain’ on June 2, 2017.

Then she started uploading different types of video such as lifestyles vlogs, DIYs, shopping hauls, travel diaries, and story times.

She also posted several videos of her workout routines, and she often shares some healthy recipes.

In a short period, she amassed over 3.3 million subscribers on her YouTube Channel. Her channel has over 217 million views. One of her most popular video titled as “We all owe the dollar store an apology.”

Some of her most popular videos like ‘How to be a savage in class, Trying to do my eyebrows for the first time, why I left school, and road trip alone.

However, she has not won any awards yet. However, she was nominated for the “Breakout YouTuber” at the ‘2018 Annual Shorty Awards. ’

Emma is conscious of fitness, and she follows a strict diet plan, and, starts her day with plenty of warm water followed by a complete workout session.

Chamberlian’s workout routine starts off with 20 minutes of cardio. She goes to the gym to work out and even she practices ‘Yoga’ at home. While working out, she loves to play loud music.

Her favorite tracks are ‘Kinder Blumen’ and ‘Quite Some Time.’

Besides this, she has learned karate, taekwondo, gymnastics and ice skating.

Emma is a vegetarian. She loves her salads to be accompanied with tofu and Veggie sushi accompanied by strawberry. Foe eat outs, Emma prefers the food joint ‘Asian Box.’

Emma loves traveling. She often planned trips and trek with her friends. Also, she is a pet lover. She owned a Yorkshire Terrier breed named, Sammy.

Her all-time favorite show is ‘The Office’ and her favorites movies are Moonrise Kingdom, Napolean Dynamite, and Caroline.

Are Emma Chamberlain And Ethan Dolan Dating? Or Just a Friend?

Emma Chamberlain and Etha Dolan are the popular personalities on the internet video channel.

It is said that Emma and Ethan are dating these days. However, most fans saw them as a friend, and fans suspecting that they are more than friends.

Though the two would certainly make a cute couple. On 4 July, Ethan shared a cute photo of Emma and him on a jet ski together celebrating Independence Day.

Ethan never posts photos with girls outside of relative and fans. He shared a photo of Emma and him together—and on holiday no less.

The internet sensation also posted a photo on 4 July with the Dolan twins. Some fans comment on a photo, she *was* standing closer to Ethan than Grayson.  She captioned:

“happy 4th. don’t forget to tell ur dad that u love and appreciate his bbq tactics”

happy 4th. dont forget to tell ur dad that u love and appreciate his bbq tactics

The Dolan Twins and Emma Chamberlain collaborate and made appearances in each other’s videos. Ethan is also a YouTuber.

Ethan and his brother Grayson makes up the successful internet comedy pair on the YouTube channel named ‘The Dolan Twins.’ The Dolans Twins has over five million subscribers.

The young YouTube star, Emma Chamberlain has a net of $4 million.

She earned a massive amount of money from her videos that she uploaded on her channel.

According to Social Blade, she made monthly from $9.2k-$147.4k and her years earning from $110k-$1.8M. At the young age, she received a huge achievement and a great addition to Emma’s net worth.

Besides her videos, she made extra money from her merchandise where she trades her signature t-shirt, hat, shoes, hoodies, and a sweater. Emma has her own online websites called Depop, and Rebubble.

Her passion for photography is well displayed through her profile on the photography mobile application ‘VSCO.’